At the West Shetland Shelf MPA, favourable weather means scientists from JNCC and Marine Scotland Science (MSS) have been making good progress surveying the seabed with a multibeam echosounder (MBES). Similar to the survey at the Greater Haig Fras MCZ earlier in the year, the use of an MBES system will tell us several things about the seabed in the area, primarily depth (bathymetry) but also backscatter. 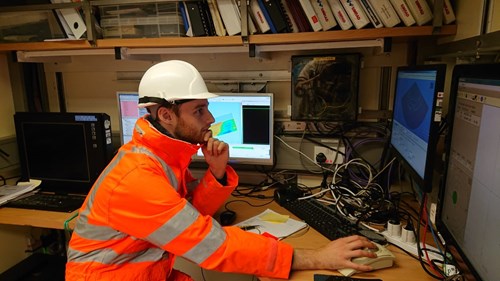 The first characteristic, depth, is calculated based on the time it takes for an acoustic signal to travel to the seabed and back but what is the second one, backscatter? This refers to the way a wave, a particle or, in our case, a signal is reflected back the way it came from. This has applications in medicine, astronomy and is perhaps best known from the world of photography.

In hydrographic applications the way the signal is reflected off the bottom and the intensity or “volume” of the returning signal tells us a lot about the seabed. Intensity tells us about the hardness of the bottom (more intense signals mean a harder seabed, usually rock or coarser sediments with less intense signals indicating a softer seabed, typically comprised of mud or fine sand) and the way the signal scatters tells us about how rough it is (a more “scattered” signal indicated a rougher seabed, such as coral or biogenic reef).

A preliminary backscatter mosaic from a section of the West Shetland Shelf MPA. This one needs some attention from our specialists to correct for the movement of the ship and the nadirs (the white lines corresponding to data collected from directly beneath the ship’s track).

At West Shetland Shelf, the team is using the data from the MBES system to inform on the distribution of seabed habitats in the area, primarily the sands and gravels for which the site is designated. Understanding where different habitats are allows the team to make informed choices on where to focus their sampling efforts. This in turn allows us to better understand these distinct habitats and their associated biological communities, which we will describe in more detail in our next blog!