After travelling from the East of England we have finally made it to Greater Haig Fras MCZ, which lies to the west of Cornwall. Since arriving at the site, the boat has been a flurry of activity. We have busied ourselves collecting multibeam sonar data for seabed mapping as well as beginning our camera and grab sampling. 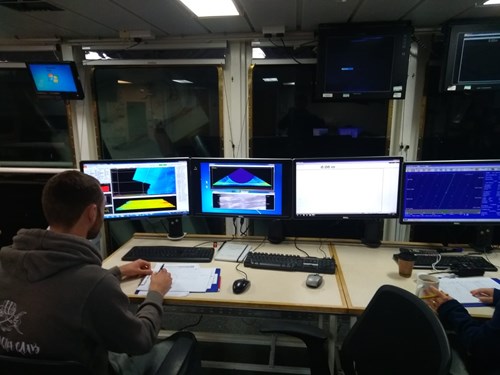 Matt having a look at some night time multibeam collection. © JNCC/ Cefas

As the weather here has been favourable so far, we have been able to take good quality images of the seabed. Excitingly, we have already seen plenty of burrows in the imagery collected, indicating the presence of sea-pens and burrowing megafauna which we mentioned in an earlier post.

The team here are also happy to have begun collecting and sieving grab samples, which allows us to find specimens of the animals that live at the site which we preserve and store for later identification. This is a muddy job, but continuing consumption of biscuits and cups of tea helps! Even with a dash of seasickness, everyone remains in high spirits.

Survey Fun Fact:
The Sea-pen and burrowing megafauna habitat in the deeper mud areas of the site, is listed as OSPAR threatened and/or declining. This means that the site has been highlighted for protection in order to maintain and/or restore a favourable habitat. With this habitat supporting species such as Nephrops norvegicus, sea pens and mud shrimps, you can see why it is an important place to understand.