And we’re off! The JNCC and Cefas crew have joined the RV Cefas Endeavour and set sail for Offshore Brighton and Offshore Overfalls Marine Conservation Zones (MCZs). After a transit hugging the coastline (which provided the team with plenty of phone signal!) in exceptionally flat calm seas for January, we have arrived at Offshore Overfalls MCZ.

Our first challenge on this survey is to produce a more detailed map of what the seabed looks like at Offshore Overfalls MCZ. To do this we will be using a Multibeam Echo Sounder. Multibeam uses sonar to tell us two things about the seabed; how deep it is, and how hard it is. This is worked out by measuring how long it takes for sound to travel from the ship to the seabed and back again (i.e. the longer it takes, the deeper the water is), and by measuring how strong the returning sound signal is (i.e. harder seabed like rock will reflect more sound energy than softer seabed like mud). Due to the large size of the area within the MCZ that we plan to map, we estimate that this element of the survey will require 7.5 days to complete! 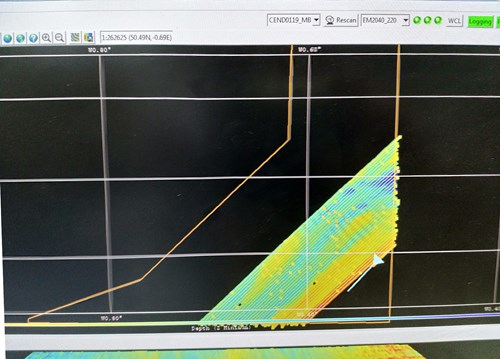 Multibeam data collected for the site will be used to update the existing map of seabed habitats at Offshore Overfalls MCZ. This mapping will also help the team on the ship decide where to collect grab samples and drop-frame camera images later in the trip.

The multibeam uses sound waves to “see” through even the murkiest of waters, replacing the more traditional lead weight on a rope method to provide us with colourful bathymetric pictures of the seafloor. The term bathymetry comes from the Greek meanings “Deep”(Bathy) and “Measure”(metry) and is the measurement of the depth of water in oceans, seas, lakes, rivers, and canals.