As COP15 begins, and with COP26 less than three weeks away, the Chairs and Chief Executives of the UK’s official nature recovery agencies call for urgent collaborative action for nature. 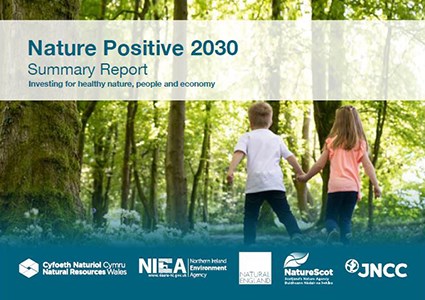 This is the challenge laid down in the Foreword of our report Nature Positive 2030, by Holly, Dara, Mya-Rose and Emily, four inspirational young nature conservationists from across the UK. It is a challenge that needs to be heeded by leaders and decision-makers around the world as the 15th Conference of the Parties (COP15) of the United Nations Convention on Biological Diversity officially opens today in Kunming, China. And this challenge is just as relevant to those preparing for the start of COP26 in Glasgow, now only three weeks away and hailed as the world’s ‘last best chance’ to avert catastrophic climate change.

The stakes could hardly be higher. At global level, over a million species are threatened with extinction, and human activities are destroying an area of forest the size of a football pitch every three seconds. In the UK, over 40% of species are in decline, more than 40 million birds have been lost from our skies over the past 50 years, and a quarter of our mammals are threatened with extinction. Many people would argue that losing nature is an ethical issue and that driving species to extinction is simply wrong. Whether or not you subscribe to this view, these losses matter: our entire economy and society rest on the pillars of natural capital and many of the services for human life provided by nature have declined. In countries like the UK, this means that we no longer have a sustainable natural system that can provide reliable supplies of clean water, purify our air, regulate our climate, secure our food supplies or underpin our health and well-being. Put simply, we need nature to live!

CoP15 (Part 1) opens in Kunming today. It includes the ‘High-Level Segment’ – a summit of world leaders and a ministerial round table, including an ‘Ecological Civilisation’ Ministerial Forum which will result in a Kunming Declaration. Due to Covid-19 restrictions, the negotiations will not conclude until an in-person meeting is possible, intended for April–May 2022. However, this delay in negotiations must not delay action for nature. Recognising the urgency, over 85 Heads of State from around the world have in the past year signed the Leaders’ Pledge for Nature, representing an ambitious agenda for transforming how humankind protects, values and uses nature. Many countries have also committed to protecting at least 30% of our land and sea for biodiversity by 2030 (‘30by30’). There is strong read across from the Leaders’ Pledge and 30by30 commitments to the draft post-2020 global biodiversity framework, making them highly relevant to the COP15 negotiations: we know what needs to be done.

Countries around the world have made many promises for nature over the past 30 years, but action has been too little and too slow. This time, it needs to be different. In recent years, the UK has played a pivotal role in raising the environmental bar at international level. Governments across the UK were the first to agree legally binding climate change targets and we look set to be among the first to adopt legally binding targets for nature, including to become nature positive by 2030. This is critical, because our nature goals need to be placed on an equal footing with our climate targets, in line with the scientific consensus that the biodiversity loss and climate change crises must be tackled together, or we will tackle neither. 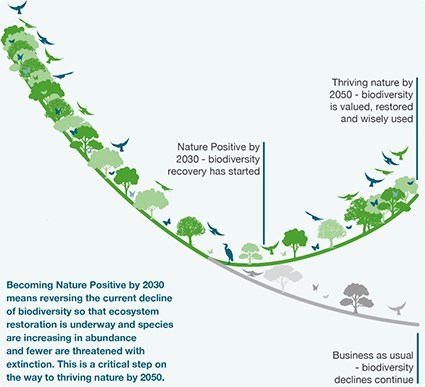 In our Nature Positive 2030 report we set out how the UK can succeed in delivering the Leaders' Pledge for Nature and 30by30 commitments, thereby reversing biodiversity loss by 2030. We highlight fantastic examples from across the UK where making more space for nature has led to rapid recovery of biodiversity on land and at sea, at the same time delivering many benefits for people. We demonstrate how investing in nature is increasingly recognised as good for business and an effective way of achieving health outcomes and levelling up across society. We stress the importance of embracing natural solutions to climate change: restoring wildlife habitats on land and at sea locks up carbon and helps us adapt, such as by reducing flood risk. Nature can help us survive our uncertain future under climate change, but its ability to do so depends upon biodiverse ecosystems that are resilient to the changes ahead.

We are optimistic that deep-rooted, transformational change is beginning in the UK that will enhance nature in the long-term, notably through reforming agricultural subsidies, restoring the UK’s marine ecosystems, and developing new markets for green private finance to invest in nature. However, we also conclude that these transformations are being introduced too slowly to deliver the scale of change needed by 2030. This is worrying because delaying action will mean it will eventually cost us much more to succeed, and over that period much of what we lose will never return, further impoverishing our ecosystems. 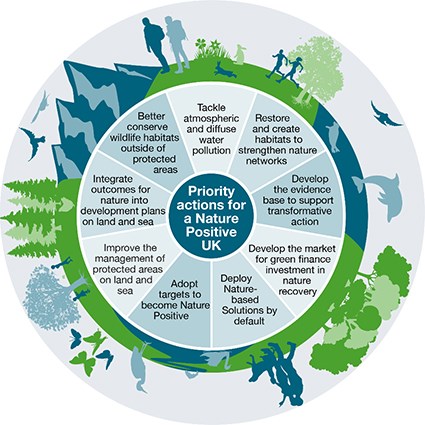 We need to begin nature recovery, at scale, now, and we identify nine actions that can be implemented rapidly, by national and local governments, landowners, businesses and others that would have particularly high impacts on reversing biodiversity loss this decade. These are based on a strong evidence base of what works and include establishing nature networks on land and at sea with core sites supporting thriving species; tackling air and water pollution; greater deployment of Nature-based Solutions to climate change and other societal challenges; and widespread adoption of nature targets – businesses, places and people need to go high nature and low carbon. We all have a role to play.

In the Foreword to Nature Positive 2030, young voices call for urgent, concerted action for nature. It’s time we listened. Nature recovery is within our grasp, provided we act together, now.