By Sofie Voerman and Angus Dobbie

JNCC and Marine Scotland work together to enhance understanding and protection of marine biodiversity including in the deep-sea. We monitor the seafloor to understand patterns in biodiversity and identify changes over time. We do this by using a suite of different sampling techniques. On this survey we’ve taken still images and videos and obtained sediment samples from the seafloor.

If you have been following our recent Faroe-Shetland Sponge Belt survey blogs,  you will have seen pictures of some of the animals we’ve recorded using underwater imagery.

A major challenge we’ve faced when collecting these data is the large water depths we need to work at. At Faroe-Shetland Sponge Belt MPA the water depth ranges from 300 to nearly 1000 m; that’s deep enough to completely submerge the Burj Khalifa (at 828 m tall), and comes with up to 100 times the pressure we experience at the surface. We have overcome this challenge by using remotely operated sampling techniques, allowing the humans to stay on board the research vessel.

For this kind of sampling, marine biologists are very reliant on our engineer colleagues to make this happen. Often a mystery to the marine biologist is how the equipment actually does the job.

As one of our engineers explains it:

“It’s a black box with lots of buttons on the outside. Inside there is a lot of magic.”.

In this blog we can reveal some of that magic.

One of the ‘black boxes’ used for collecting deep sea imagery is called a Video Multiplexer. The multiplexer allows us to run multiple cameras and other instruments from the stern of the Scotia off a single cable, called the ‘co-axial cable’, which is itself deployed using a deck winch. The co-axial cable is like the cable you would find connecting an old-fashioned TV to a TV aerial, only this is an extra tough version.  The "armour" of the cable is two layers of braided steel wire which provides the strength required to lift the video equipment and move it to the sea floor, while the inner co-axial copper wire provides the electrical connection for the power and signals from the vessel.  The cable can be used with other monitoring systems so the winch and cable we are using are very versatile. 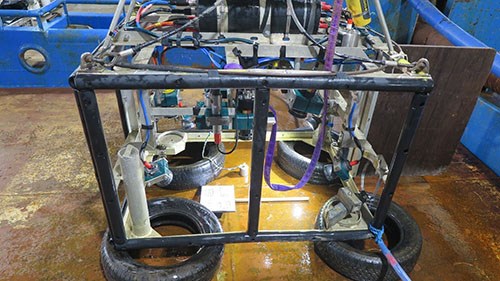 The multiplexer system has two halves, a "Subsea pod" that is attached to the camera frame (Photo 1) and a "Topside unit" that stays dry on the vessel (Photo 2).  The camera frame is a simple sturdy metal frame.  It is fitted with lights, cameras and instruments which measure the environmental conditions and help the engineers "fly" the frame in the water.  The Topside unit is connected to two video monitors to show the pictures from the cameras and a laptop that provides control signals and displays the instrument data.  Power for the whole system comes from a standard wall socket you would find at home. 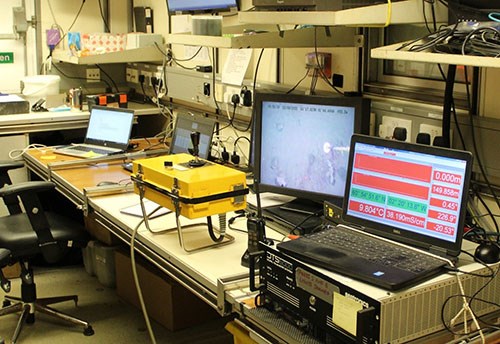 To collect seabed imagery the ship’s crew take the vessel to the sampling location and the camera frame is lowered over the stern by the deck crew (you can see an example of this from our 2019 West Shetland Shelf survey on https://www.youtube.com/watch?v=G1aOBcC9mdk). The engineer then takes control of the winch to lower the frame to the seabed and then keeps the frame flying over the target sample area while the marine biologists record video, take still images and log the environmental data. The ship’s crew maintain a steady course until the marine biologists are happy that the area has been covered sufficiently, at which point the camera system is winched back and taken aboard, ready for another deployment. 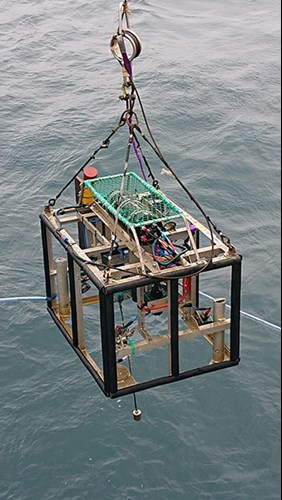 Thanks to the engineers that work at MSS we are able to sample otherwise inaccessible depth. With these samples we can make new discoveries and increase our understanding of life at the deep ocean floor. We can also use this information to inform how this part of the ocean and the valuable marine ecosystems here are protected into the future.