On international Women’s Day 2021, one of our very own inspirational women, Chief Scientist Professor Christine Maggs, talks about one of the women who inspired her, and celebrates some of the achievements of the inspiring women who work at JNCC.

International Women’s Day (IWD) has been observed since 1911 as a global day to celebrate the social, economic, cultural, and political achievements of women.  The theme for this year is "Choose to challenge" – from challenge comes change.  I’d like to use this day to celebrate women’s achievements, both within and beyond JNCC.

My celebration starts with Jocelyn Bell Burnell, who is my hero. Jocelyn is a Visiting Professor of Astrophysics at the University of Oxford, who was born in Belfast.  In 1967, as a postgraduate student in Cambridge, she discovered the first radio pulsars (rapidly rotating neutron stars), with her thesis supervisor Antony Hewish.  Hewish received the Nobel Prize in Physics in 1974, but Jocelyn’s role in the dramatic discovery was not rewarded for over fifty years.  In 2018, she was the winner of a Special Breakthrough Prize of $3 million, an award previously won by Professor Stephen Hawking. She donated the whole prize to fund PhD studentships for people under-represented in physics, including female, under-represented ethnic minority and refugee students.

Jocelyn is my hero, not because of her scientific achievements, but for how she challenged the existing order.  Jocelyn has worked constantly and effectively, throughout her life, to challenge the anti-female bias in science.  In her secondary school in Northern Ireland, girls could not study science, but with the help of her father, she challenged this, and went on to become a world-renowned astrophysicist.  Despite being the only female on her course at Cambridge University, she made world-leading discoveries.  Much later, she was one of a small group of women who devised and set up the Athena SWAN charter, which aims to achieve gender equality in the UK University sector and to support women throughout the academic sector.  At an IWD event at Stirling University in 2015, I had the good fortune to hear her own, humorous, view of how this scheme had been thought up.  During the 2020/21 lockdown year, the event that has given me greatest pleasure is being invited to read a poem for Jocelyn during a Royal Irish Academy discourse – the beautiful Halley’s Comet by the American poet Kenneth Rexroth.  I hadn’t previously known that Jocelyn had co-edited an anthology of poetry with an astronomical theme – 'Dark Matter: Poems of Space'. 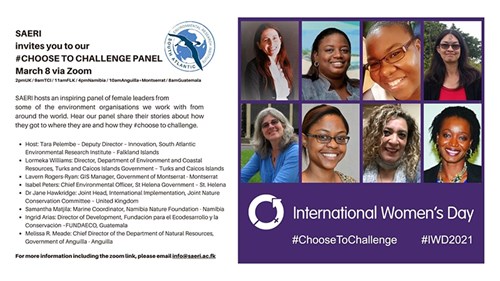 At JNCC we have a high proportion (about two-thirds) of female staff. The many achievements that merit celebration are almost too numerous to mention, but there are some recent highlights, including one today (at 14:00 UK time), when Jane Hawkridge will attend an IWD panel hosted by the South Atlantic Environmental Research Institute (SAERI), to share her story about how she got to where she is now, and how she 'chooses to challenge' (for further details, contact SAERI).

Other recent examples include Alexandra Cunha, who, in January this year, was nominated for the award "Activa Mulheres Inspiradoras 2020" in Portugal (which translates as "Inspiring Women 2020") in the sustainability category for her work in marine conservation. This followed an interview Alexandra gave last year to a major Portuguese newspaper, explaining how she came to JNCC and challenged the employment situation in the scientific sector in Portugal; and was followed by an invitation to be a keynote speaker in the Portuguese Science and Research Foundation’s International Conference. Also in January, Kelly MacLeod was honoured with the ICES Service Award for her work as co-Chair of the Working Group on Bycatch of Protected Species for three years. In addition, towards the end of last year, a paper was published in PeerJ, which was authored by a global group of early career researchers mentored by senior scientists, including JNCC’s Hannah Carr (currently seconded to Defra), convened as part of the 4th World Conference on Marine Biodiversity. The paper reflected on the accomplishments and shortfalls under four of the Aichi Targets considered highly relevant to marine conservation.

We can also celebrate our support for an inclusive culture for women at JNCC, through the opportunities and options for part-time working and remote working that the organisation offers – for all staff, not just women – which go far beyond what is available across much of the Civil Service. We provide an environment where home life is high on the agenda. We have many female staff members, at all grades, and in all sorts of roles, who are role models for others, through the day-to-day management of their careers and home lives, both within the organisation and beyond – through their communities, friends and families.

Last but not least, we are delighted that next month we will welcome a new, female, interim CEO to the organisation – Dr Gemma Harper OBE.  This appointment is a hugely positive step forwards in terms of addressing the previous gender imbalance at senior level at JNCC.  Beyond her leadership role, Gemma is personally very committed to Equality, Diversity and Inclusion (EDI). We are optimistic that she, in collaboration with our EDI Group, will take positive steps to raise awareness against bias, to improve equality in all areas of our work, and to encourage us all to choose to challenge.

We've highlighted just a few examples of recent achievements by some of our female staff members in this blog post, but we regularly celebrate the varied and many achievements of all our staff members through our Newsletters and social media channels (Twitter, Facebook, LinkedIn).