EO in the South Atlantic, and beyond! 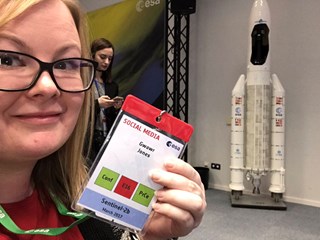 It has been an exciting year full of Earth Observation (EO) activity in the Falkland Islands. As part of JNCC’s role in the UK’s Overseas Territories, I have been providing advice, sharing approaches and understanding, and aligning the application of technologies such as EO to the Falkland Islands.

The first major event of the year was the launch of the Austral Earth Observation Alliance (AEOA), which is a centre of excellence looking to promote and enhance the application of EO through a tailored network of countries and territories in the South Atlantic and South American region and beyond. Our partners include the South Atlantic Environmental Research Institute (SAERI), who is the lead partner, Universidad de Magallanes (UMAG), Universidad Santo Tomás, Universidad de Chile and University of Dundee. Working with my colleagues Megan Tierney and Sarah Harrison, we helped organise and participated in a week’s worth of activities, including a science symposium with the Centre’s partners in the Falklands and Chile; establishing a vision for the centre moving forward. There are many interesting potential projects in the pipeline, as the Falklands and Chile have much in common, such as agricultural practices, and similar wetland habitats and species presence. EO can be a useful tool to help monitor the environment across many sectors, especially in remote areas, and we are looking forward to continuing working with the Falklands and our colleagues in Chile. 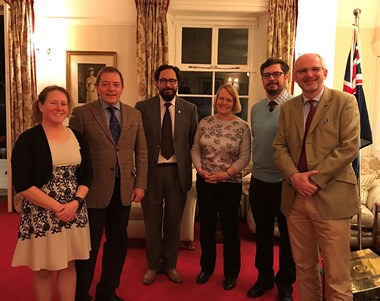 Following the AEOA launch, I switched focus to the Darwin Plus project Coastal habitat mapping of the Falkland Islands and South Georgia (DPLUS065), of which JNCC are partners. The project takes advantage of earth observation data to create the first broad scale coastal margin (terrestrial, intertidal and subtidal) habitat maps for both UK Overseas Territories. Fine-scale habitat maps in areas of stakeholder priority are also being developed. Knowing the current extent of these habitats are critical for their management and conservation, and these maps will create essential baselines that can be used for future planning, decision-making and monitoring. In March, work began on devising a training workshop programme, which focused on providing the Islanders with the tools necessary to make informed decisions regarding the use of EO for future work areas and the maps from the coastal habitat mapping project itself. 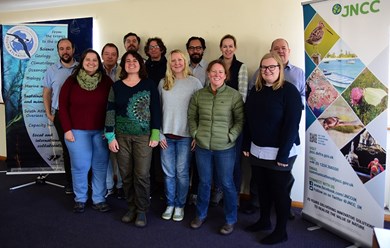 AEOA partners after a successful week of activities © Penguin News

During my visit to the Falklands in March, I was able to contribute my own time as a volunteer on another Darwin Plus project, Soil Mapping the Falklands (DPLUS083). Volunteering involved collecting soil samples on Saunders Island, surrounded by the most amazing wildlife; Gentoo, King and Rockhopper penguins, Elephant seals and Albatrosses all in one afternoon! Hopefully my contribution will help the team produce high resolution soil maps for the Falklands, which will be an incredible resource for work on understanding peatlands, carbon stock, soil erosion, and any associated risks and vulnerability from changes in the landscape.

(Left) some of the tools involved to collects the required soil samples for the soil mapping project, and (right) soil samples and habitat information form complete! © Gwawr Jones/JNCC

In July, I went back to the Falklands to deliver the training workshop that we developed for the Coastal Habitat Mapping project. The training covered the basics of EO, from satellites to drones, and ran through the mapping methods used in the project so that participants have a much better idea of how the maps were created, how to use them for their own area of work and how the maps can be updated after the project concludes. The workshop was well received and attended by individuals from government departments, NGO’s, researchers and even a couple of high school students who took an interest in the project. We hope to deliver further training in the future, so the Territories can make informed decisions on the suitability of EO datasets and products for effective decision-making. Videos and material will soon be made available from the training workshop and will be accessible via the SAERI Coastal Habitat Mapping project website. The project is coming to an end this year and JNCC is hosting a workshop in Peterborough on the 12-13 November to showcase the successes of the project, discuss a legacy for future monitoring, undertake horizon scanning and develop future collaborations. There are a few places left for the workshop so if you are interested in joining us, please get in touch.

I look forward to continuing working on developing project ideas and collaborating with our partners in AEOA and Darwin Plus projects on earth observation related topics, in the Falklands, South Georgia and Chile.  To enable better facilitation of our role with the South Atlantic Territories and adjacent South American states, JNCC has a permanent member of staff based in the Falklands – our colleague Megan Tierney. Megan works with the UK and South Atlantic Overseas Territories governments and stakeholders to coordinate input and actions required under the Agreement on the Conservation of Albatrosses and Petrels. She also supports/facilitates an ongoing programme of work in the SAOTs and wider South American region that responds to regional priorities. Megan can be contacted via email at Megan.Tierney@jncc.gov.uk

Find out more about our work in the Overseas Territories and Chile.

The Darwin DPLUS065 & DPLUS083 projects are grant aided by the Darwin Initiative through UK Government funding. Partners in DPLUS065: