The joint 1121S JNCC and MSS survey to Faroe-Shetland Sponge Belt MPA aboard MRV Scotia has come to a close. For much of the survey we have been blessed with flat calm seas, a rare occurrence in this part of the world. These incredibly fortuitous weather conditions have enabled us to collect a huge amount of imagery data which will be used to monitor changes in the condition of the sponge belt over time.

We have used four different types of equipment to sample the marine environment and life within the MPA. Mostly we have been using MSS’s drop frame camera (more information on this was in our previous blog). But we have also used a different MSS camera system called the video "chariot". The chariot is towed above the seabed without making contact with the bed. It is towed at around 2 miles per hour (mph), which may not sound fast but is positively rapid compared to the 0.5 mph speed the drop frame camera is towed at. This allows us to cover large areas much faster than would be possible with the drop frame, so the chariot is useful for searching parts of the site where we lack information on the presence of sponges. The downside is that the chariot must be towed relatively high above the seabed (about 3–4 m) and only video footage is recorded (unlike the drop frame, which also collects still images). This, along with the flurries of marine snow in the area, can make it difficult to see many of the smaller animals living on the seabed, including some of those we have looked at in our earlier blogs. Ultimately the drop frame and the chariot are tools for slightly different jobs, and we choose the most appropriate one for the task at hand.

We also collected water samples and used a probe to collect information about how salinity (which is calculated from the water's conductivity), temperature, and other properties of the water change with depth. We call this piece of equipment a Conductivity, Temperature, Depth probe, or CTD for short. The Faroe-Shetland Channel is a key gateway through the Greenland-Scotland Ridge, an underwater barrier between the Atlantic and Arctic ocean basins. The ocean circulation of the region is critical in the global overturning circulation, where warm, more salty water at the surface flows northwards from the equator, bringing heat and salt to the Arctic region, and at depth, a return flow brings relatively cold and fresh water back into the deep basins of the Atlantic Ocean. Measurements of temperature and salinity have been ongoing since the late 19th century in the Faroe-Shetland Channel. These measurements have been used to study the role of the ocean circulation in the region and are critical in understanding the local and global climate. Sampling from this survey will contribute to these invaluable datasets and MSS’s oceanographic work.

The final piece of equipment we used was JNCC’s deep-sea Hamon grab. This grab sampler is lowered to the seabed on a cable, where it scoops up a bucket full of sediment with its excavator-like arm, and brings the sediment back to the surface. Though it’s scoop has the same sampling footprint as a ‘normal’ Hamon grab, the difference lies in that the deep-sea Hamon grab is larger and heavier, which makes it more likely to successfully sample the seabed in deeper water than a smaller, lighter grab. 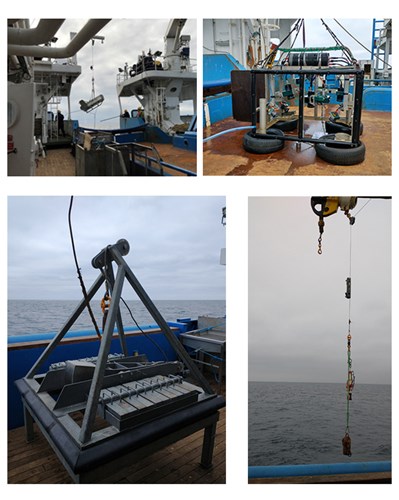 In total we sampled 184 stations with the drop frame camera, taking over 15,000 photographs of the seabed, 10 camera chariot transects, 11 CTD stations, and we successfully tested our deep-sea Hamon grab at five stations; we plan to bring this grab back to the Faroe-Shetland Channel on future surveys. 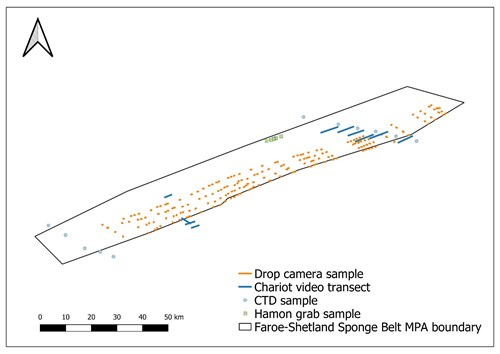 Figure: Map showing the locations of the samples collected at Faroe-Shetland Sponge Belt.

The data we have collected will now be processed and analysed. For the photographs and videos of the seabed that have been collected, this will involve identifying and counting the sponges and other animals that are present using image annotation software. When we revisit the Faroe-Shetland Sponge Belt in the future, we will be looking to see if the types of sponges and the densities they grow at have changed since this 2021 reference point.

A massive thank you to all the MSS staff and crew of the MRV Scotia, without whom this survey would not have been possible. Until next time, this is goodbye from the JNCC scientists at Faroe-Shetland Sponge Belt. 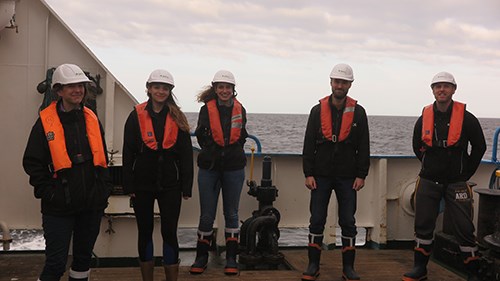 Photo: JNCC staff onboard the MRV Scotia, on the joint JNCC and MSS survey to Faroe-Shetland Sponge Belt (1121S) (© JNCC/MSS 2021).