JNCC and Marine Scotland Science staff set sail on the RV Scotia on the morning of Monday 18thJuly for a 17 day scientific survey to establish the first point in monitoring time series at Geikie Slide and Hebridean Slope Nature Conservation MPA. The MPA, one of the 30 Nature Conservation Marine Protected Areas (MPAs) designated in July 2014, is located on the Hebridean continental slope; north-west of the Outer Hebrides.

The MPA, which in part is named after the famous Scottish geologist Sir Archibald Geikie, is designated to protect a range of sedimentary habitat types that are home to a diverse array of marine animals.

What is particularly special about this site from a biological viewpoint is the way that marine animals present on the Hebridean slope change with depth. On the upper slope where sediments are much coarser, we may expect to survey communities typical of rocky reefs such as sponges and crinoids (e.g. feather stars). Further down into the murky depths of the site towards the Rockall Trough, we can expect to find muddier habitats where communities of the bushy sea pen and large burrowing crustaceans call this environment their home.

In this relatively data limited site, we plan to use a combination of video tows to better characterise the range of communities present across different depth zones within the site, as well as taking samples of the seabed using a grabbing device known as a box corer. Having completed a successful ‘wet test’ of the equipment near Fraserburgh, the survey team are now all set to spring into action once we reach our survey destination: ETA 7pm on 19th July. 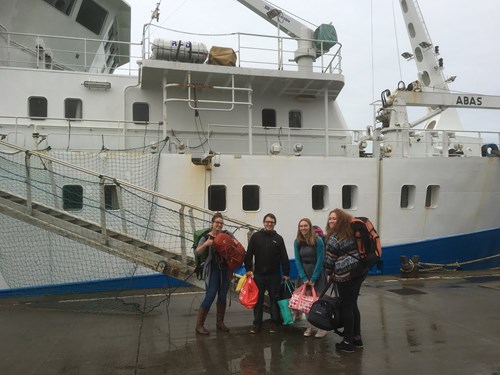