We’re now in the latter stages of the 1219S survey here at West Shetland Shelf Marine Protected Area (MPA). We’ve shown examples of the data we’re collecting but what are the roles of the people behind the data? Below is a summary of some key scientific roles associated with the data acquisition on this survey.

The survey scientist roles comprise of JNCC survey staff and Marine Scotland Science colleagues. The survey lead from JNCC is responsible for the planning of the survey and makes key decisions regarding the data acquisition. The Scientist in Charge (SIC) has a crucial role of facilitating communications between the survey scientists and the bridge (captain and first mate commonly) who control the vessel. The SIC further has joint responsibility with the captain for the health and safety of the scientific staff and other administrative duties. 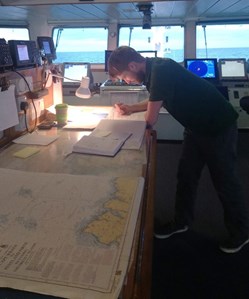 Survey scientists can be split into four main roles. Firstly, we have the drop camera team. They conduct data gathering from the camera by taking still images, video footage and record metadata alongside them, e.g. time, date, latitude and longitude. This task usually requires a minimum of three people to operate the camera, take images and record the metadata. So far, our drop camera team have been seeing a variety of seabed types, from sand to coarser sediments and boulders, supporting a rich faunal diversity. See their “Smile, you're on camera!” blog for more details on what they have found. 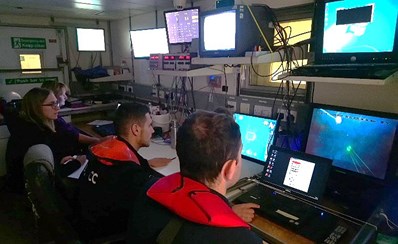 Next, we have the multibeam team. They are responsible for operating the acoustic systems which effectively scan and map the seafloor. This task requires continual communication with the bridge to ensure the vessel is moving along the correct lines of acquisition. On this survey, we are using the multibeam RESON Seabat 7125 and Roxanne systems to gather information about the seabed. So far, we have successfully mapped two of our survey boxes and the data is looking good! See their “Acoustics Ahoy!” Blog for more details 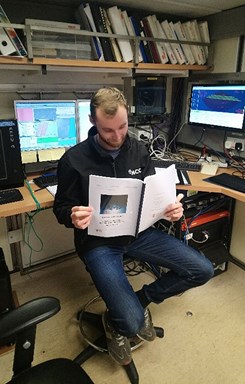 The Hamon grab team conduct the other main type of surveying; substrate and faunal sampling. This active role takes a sample from the Hamon grab, passes it through a series of sieves and accurately stores it in the correct sample pots and chemical preservatives. Metadata is also collected here which helps to more accurately describe where the sample is from and when it was collected. On this survey we have been conducting many grabs with a lot of sand coming in and a few coarser examples. Fauna has been collected for monitoring of the site as well as for DNA sampling for the National Museums Scotland and the Natural History Museum. 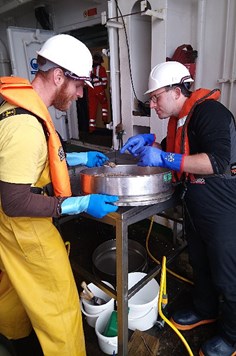 Tom Tangye and Joey O'Connor sift through the samples

The fourth scientific role is that of the data manager. They are responsible for the accurate recording and storage of data collected. This role involves sorting the data into organised file structures, quality checking for errors and continually looking for ways to improve the quality of data coming in. On this survey, the data manager has also supplied lots of biscuits! 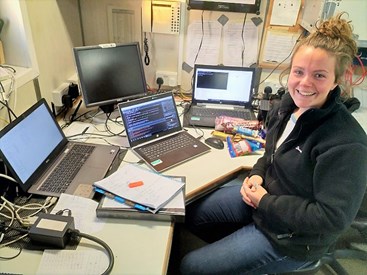 No data acquisition can occur without all the other crew members on board who do everything from running the ship to deploying and retrieving the equipment and keeping us well fed!