Offshore Survey due to commence in the Irish Sea

On 30th October 2016, JNCC and Cefas will embark on a survey of Pisces Reef Complex candidate Special Area of Conservation/Site of Community Importance (cSAC/SCI) in the Irish Sea (see map below), aboard the RV Cefas Endeavour (CEND2316x). 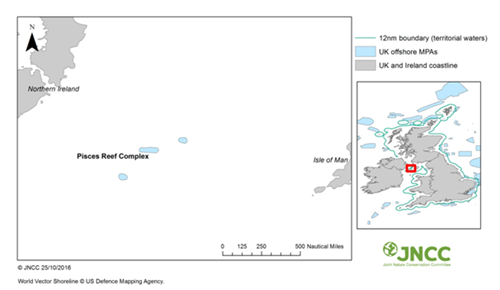 Pisces Reef Complex cSAC/SCI consists of three areas of Annex I bedrock and boulder-dominated stony reefs, which protrude through an extensive mud plain between the Isle of Man and Northern Ireland. The three reefs rise 15-35m above the surrounding seabed and are composed of silty bedrock, with a patchy veneer of muddy sediment.

This survey is aiming to gather evidence to monitor and inform assessment of condition of the designated features of Annex I Reefs in the Pisces Reef Complex cSAC/SCI. The survey will collect Multibeam Echosounder (MBES) and sub-bottom acoustic profile data across the site to investigate the extent of the reef and the depth of any sediment veneers that cover it. This will be ‘groundtruthed’ by collecting seabed videos and still images. Marine Mammal Observers (MMOs) and Passive Acoustic Monitoring (PAM) will be used in order to comply with the JNCC guidelines for minimising the risk of injury and disturbance to marine mammals from seismic surveys. Data will also be collected on temperature/conductivity (salinity), pressure (depth), fluorescence (chlorophyll), light transmissivity (suspended load) and oxygen to help build a picture of the environment at the site.

Stay tuned to our blog and JNCC Twitter feed for further updates throughout the survey!