Hello from Offshore Overfalls MCZ, where the team have been working hard to finish off collection of the multibeam data. Whilst collecting this data we have seen a few shipwrecks, which has added some excitement to the early hours of the morning for the night shift. I have written about how some of these ships came to be on the seafloor below. These shipwrecks were identified as being of interest before sailing, in collaboration with Historic England.

One of the wrecks we have seen is the SS Alaska, which sunk in 1939. The vessel sank in collision with a British cargo vessel SS Dotterel on 15thNovember 1939. Two men were sadly lost in the collision however the remaining crew were rescued by other vessels. The location of this vessel was not confirmed until recently as a number of different positions were given for this wreck although salvage operations directed at SS Alaska are recorded as having occurred between 1947 and 1951. 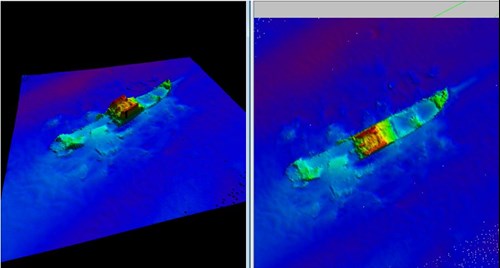 Wreck of the SS Alaska © Cefas/JNCC

HMS Implacable is an additional wreck that we have been keeping an eye out for on this survey. This vessel was scuttled by the Royal Navy in the English Channel in 1949, but it was built in Rochefort (France) 149 years earlier in 1800 as the 74-gun ship Daguay-Trouin. She saw action at Trafalgar in 1805 and was captured by the British in the battles aftermath and renamed HMS Implacable.

In the 1940s she was deemed too expensive to maintain and on 2nd December 1949 she was scuttled in the English Channel. The stern section and figurehead were removed beforehand and given to the National Maritime Museum, Greenwich where they can still be viewed today. Finding evidence of this wreck is very exciting as we were not sure how much of HMS Implacable's wooden structure would have survived 70 years on the seabed.

Polandia is the third and final vessel that we have seen on this survey. Polandiawas a steam-driven liner built in Germany in 1898 weighing 2,238 ton and original named Paul. She was captured by the British in 1914 and renamedPolandia only to be sunk claiming the lives of all 30 crew members after being attacked by a German U-boat on 10th or 11th March 1917.

These are just a few of the wrecks we have seen on the recent survey from the multibeam data out of the 50 wreck site records held for this area. Having completed the acoustic survey that we had planned for Offshore Overfalls, the team are now shifting focus to collection of photographs and videos of the seafloor within this MCZ. Steering clear of all known wrecks in this area to ensure our drop camera doesn’t join the many wrecks down at the bottom of the channel, the team are ready to get a closer view of what animal life can be found in this area.

The weekend weather is sadly looking to break the trend of calm seas we have been enjoying so far with the wind due to pick up and so the boat may be moving around a little more than previously. Fingers crossed my sea-legs have kicked in and the copious amounts of ginger biscuits at hand will keep the sea sickness at bay.