We arrived at Pobie Bank Reef on Sunday evening and have this week mostly been collecting photos and videos of the seabed using the MRV Scotia’s drop-down camera system.

These data help us to understand what types of seabed habitat are present at Pobie Bank Reef and what species are living on these habitats. With this information we can improve our maps of the site and monitor how the communities of animals living on the reef change over time.

The reef itself provides a surface for animals to live and grow on as can be seen in the selection of photographs below. 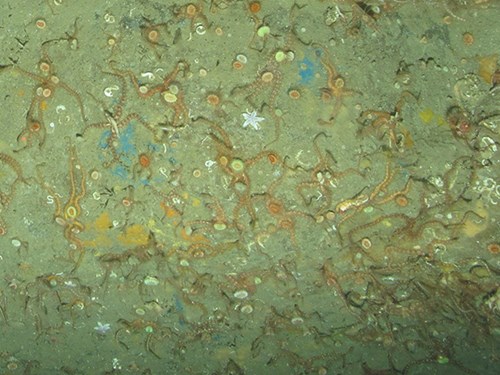 In the first photograph you can see the bedrock is covered in cup-corals and brittle stars.  The cup-corals are small stony corals, with each individual sea anemone-like "polyp" living in a cup which it builds from calcium carbonate.  Cup corals come in a variety of colours and you can see some here appear an iridescent green, due to the camera’s lights.  The cup corals are joined on this rock by a swarm of brittlestars.  Snake-like arms give this class of animals their name 'Ophiuroids', from the Greek for serpent! 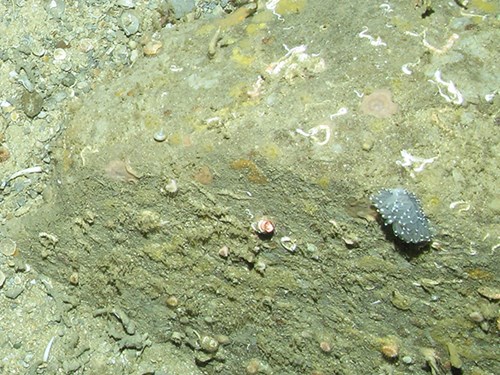 The second photograph shows a sea slug, a type of gastropod mollusc. This bizarre animal has a translucent body covered with protrusions, each with a white tip. This particular type of sea slug is also known as a 'Nudibranch' which literally means naked gills, due to the lack of a shell. 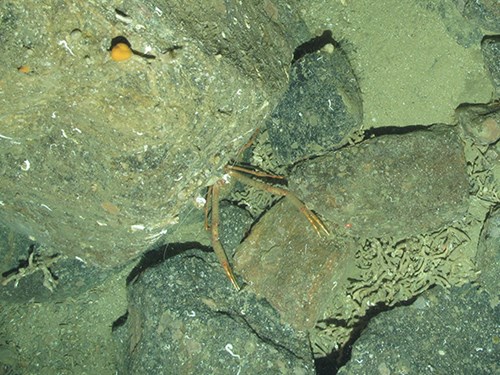 The reef also offers lots of places for animals to hide; in the third photograph you can see the long, slender, claws of a squat lobster peaking out from underneath a rock.

Remember to check back soon to find out what the survey team gets up to!