Having focussed on camera work since our arrival here (see blog #2 for more on this), we have now begun the acoustic element of the survey.  We will be collecting multibeam echosounder and sidescan sonar data within the site.

The acoustic data gives us more information about the habitats in Pobie Bank Reef, particularly how widespread the bedrock and stony reef are within the site. This in turn gives us a greater understanding of the site and allows us to improve our maps of the area surveyed.

The MRV Scotia’s multibeam echosounder sends pulses of sound underneath the vessel. These pulses then travel through the water, before bouncing off the seafloor and are detected by the multibeam system again.  This is like how bats and dolphins use echolocation to see their environment.

Although we have only started gathering and processing the data from the multibeam, it is already revealing information on the structure and precise location of the bedrock and stony reef at Pobie Bank Reef SAC.  It is an exciting time, as we are revealing previously unmapped areas of the site.

The bedrock and stony areas of reef provide a habitat for marine life, and offer a stark contrast from the surrounding area, like the Unst Basin – a deep sediment basin to the north-west of Pobie Bank. This can be seen as the blue area in the image below, where the colour-scale shows blue as relatively deep and red as relatively shallow. 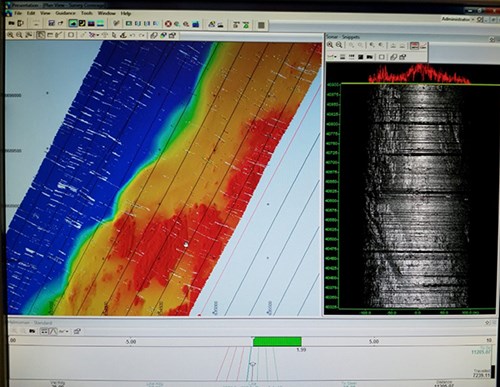 We are continuing to map the site and uncover more from Pobie Bank Reef.  Remember to check back to find out what the survey team has been up to.