Hello again from the 1218S survey! We have now returned to Wyville Thomson Ridge SAC to continue our sampling here following a welcome half-landing in sunny Ullapool.

Since we have been here we have found it hard to ignore the influence that the topography of the ridge has on the habitats and communities we have encountered (see Figure 1). Closely related to this, we have found much variation in the temperature of the water at the seabed surrounding Wyville Thomson Ridge. Influenced by colder Arctic water, seabed communities to the north-west of the site experience water temperatures which drop to a chilly -0.7°C (much colder than your average fridge!). A few miles to the south-east the warmer Atlantic water, itself warmed by the Gulf stream, was observed on this survey to reach a balmy 9.4°C at the seabed. Due to this, we have encountered different biological communities in different regions of the MPA. 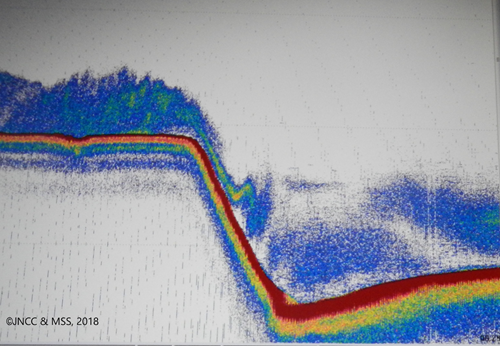 But what of the habitats themselves? We have found that the shallower parts of the site (the ridge top and sides) seem to be dominated by cobbles, boulders and coarse sediment such as gravel and sand. In the deeper water off the ridge, we have found muddier habitats, including some consisting of hard material with a thin covering of silt.

From our observations, these habitats all have distinct biological communities associated with them. We have found crinoids and even cold-water corals dominating similar habitats (cobble and boulder fields), while sponges have been seen on rocky surfaces throughout the site. Burrows, with as yet unknown inhabitants, were seen in the muddy areas, together with a giant Umbellulla sp. seapen!

The images below show some examples of the range of habitats we have encountered and the animals which live there. 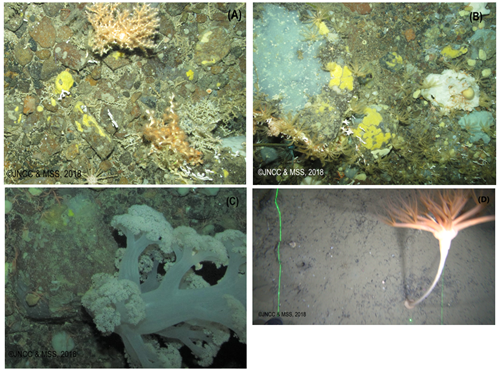 Potential stony reef with cold-water corals (A) and sponges and crinoids (B), cauliflower coral on gravel (C), and mud with Umbellulla sp. seapen (D)

We have also seen a plethora of mobile species from fish, captured by the underwater camera at the seabed, to marine mammals at the surface. Fish species observed include rays, chimaeras, ling and many, many red fish. During one camera tow, we were especially excited to spot two Arctic skates enjoying a nice seabed walk! This species was also sampled during the first leg of this survey; see if you can spot it on our previous blog. 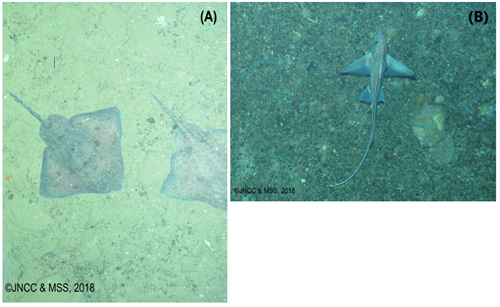 Arctic skate (A) and Chimaera monstrosa (B)

Please check out @JNCC_UK on Twitter (#1218S) if you would like to see footage of the common dolphins, pilot whales and fin whale we have encountered!

The Chimaera monstrosa or Rabbitfish, is on the IUCN Red List of Threatened Species in the 'Near Threatened' category. Its favourable depth range coincides with high-levels of deep-sea fisheries making it vulnerable to capture, via methods such as trawls and bottom gillnets. A secondary threat is the increasing interest in using liver oil from this species in human dietary supplements. Read more here: