On Friday 6 July, the RRS James Cook sailed into Southampton following a successful three-week expedition to the Celtic Shelf and Bay of Biscay, west of Cornwall. The voyage delivered a unique combination of first-class science, trials of novel marine robots, and training opportunities for scientists, technicians and engineers. In addition, the expedition represented an important collaboration between the National Oceanography Centre (NOC) and the Joint Nature Conservation Committee (JNCC), with the core of the science work being targeted at developing a better understanding of the spatial and temporal patterns in seabed biological communities in two of the UK’s new marine protected areas (MPAs). 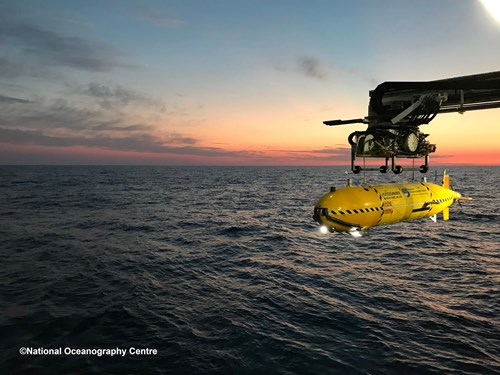 Autosub6000 ready to be deployed

The team on board used the Autosub6000 Autonomous Underwater Vehicle (AUV) to map a section of the Greater Haig Fras MPA, an area including the only rocky reef on the Celtic Shelf, protected for its mosaic of underwater habitats. The AUV collected detailed acoustic and photographic data over a section of the marine conservation zone (MCZ) that it also surveyed in 2012 and 2015. These repeat surveys are enabling NOC researchers and UK Government to understand how the seabed and its inhabitants are changing through time.

Seafloor video data and samples were gathered by the NOC’s Remotely Operated Vehicle (ROV) Isis, which was also deployed in the Whittard Canyon in the Bay of Biscay (an area which includes The Canyons MPA). This submarine canyon hosts unique deep-sea communities, including England’s only cold-water coral reefs, and the ROV provided new data on the status of the coral and the seafloor environment in the area, down to a depth of 3850m. 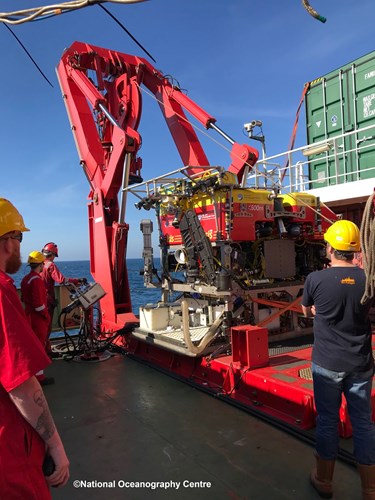 In addition to the ROV and AUV, the NOC’s Marine Autonomous & Robotic Systems (MARS) team trialled a number of other robotic vehicles and subsystems, including the UK’s first 6000m depth rated underwater glider, and a sub-system which will be used for long-range under ice navigation.

Dr Maaten Furlong, Head of MARS, said: “It is an exciting time in the development of marine robotic systems, as they are rapidly developing and becoming an integral part of ocean observation. This expedition has allowed us to test systems which will augment ship-based data collection, and to trial ship-independent systems which will be used to collect data over the wider ocean and in difficult to access areas.”

Ana Jesus, Marine Evidence Manager at JNCC, said: “The surveys by ROV Isis, Autosub6000 and the RRS James Cook provide JNCC with invaluable information about the marine areas we have to monitor and manage. At JNCC, we do not have regular access to equipment with these advanced capabilities and depth ratings, and so are keen to explore their performance in relation to the monitoring of MPAs. We look forward to continuing and expanding our collaboration with the NOC.”

The training opportunities provided by this unique science/engineering expedition were appreciated by all on board. The NOC’s Dr Veerle Huvenne, chief scientist of the expedition, said: “Working so closely with each other, learning the details of each other’s role on board, was a very good experience for both the engineering and the science teams. We are training the next generation of scientists and engineers in the use of the newest marine research equipment, while simultaneously maximising the research output from every single day our vessels are at sea.” 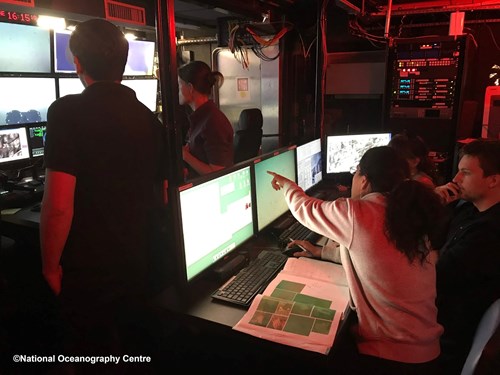 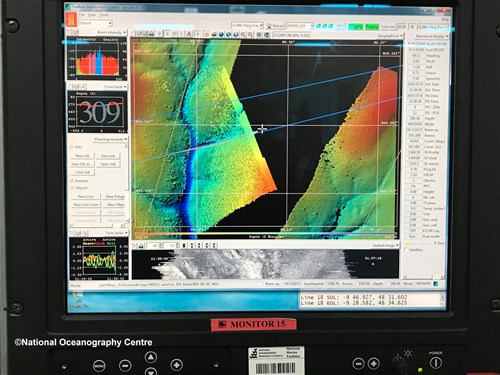 Scientists on board observe the data gathered

This article was originally published on the 25th July 2018 by the National Oceanography Centre at http://noc.ac.uk/news/rrs-james-cook-returns-successful-collaborative-voyage.