Since our last blog, marine scientists from JNCC and Marine Scotland Science have been busy here at the West Shetland Shelf MPA with data streaming in from the Hamon grab and drop frame camera operations.

Marine scientist Tom indicating the drop frame camera
that is to be used, and where it's secured during transit from station to station.

On board, the night shift team (working from midnight to midday) deploy the drop frame camera system, which is capable of collecting video footage and still photographs in high definition. The drop frame system is towed behind the vessel attached to a cable for approximately 200 meters at a steady 0.5 knots. This is known as a transect.

The camera is winched down to the seabed and the team use TV monitors and depth sensors to gauge when it is approaching the bottom until the seabed comes into sight. The TV monitors are also used to capture the still images along the transect.

There is a delay from the image you see on the video screen to the time you press capture to take the still image. This is something that the team attempt to keep as consistent as possible to allow for accurate images. 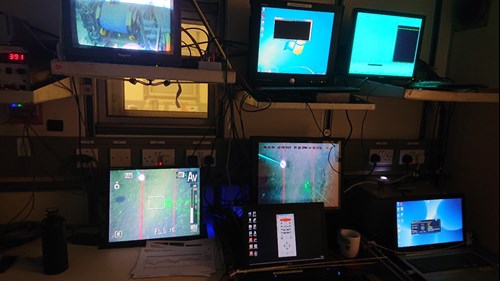 The monitor screens used for observing live imagery feed of the drop frame in relation to the seabed.
Our team can keep the camera above the bottom to record the video and taking the stills.

One use of the live video is to assess the seabed to see if it can be sampled via a Hamon grab or not. The seabed here has a variety of sediment types from sand, bedrock, gravel, cobble or the occasional boulder. You can have a combination of these types of seabed in one video transect. If we have cobbles and / or boulders it is less likely that we can use the grab, but we can still analyse the video and still images for MPA monitoring purposes (e.g. to identify and count biota present).

There have already been some interesting finds from our camera tows, examples of which can be seen below. 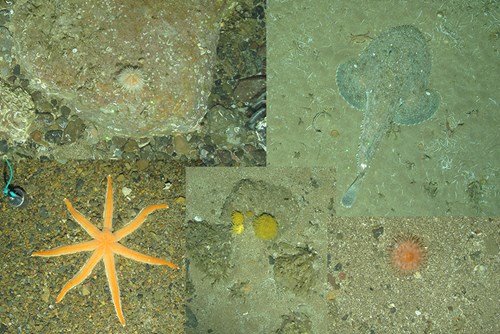 From top left: Sea urchin resting on a boulder; Monkfish with a crab; a 7-armed starfish relaxing on gravel; yellow sponge and an anemone.