Having arrived at Bassurelle Sandbank our scientists began work collecting grab samples to look at the creatures living within the sediment and using a towed camera sledge to record footage of what is living on the seabed. 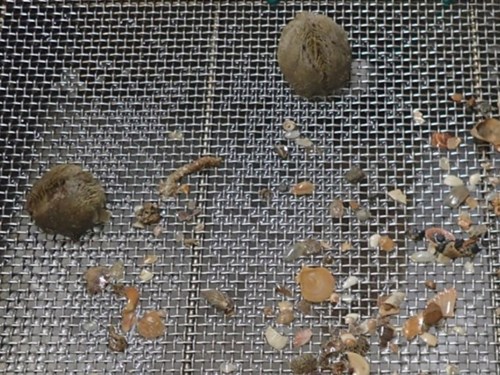 Animals like sea potatoes (Echinocardium cordatum), a type of sea urchin, were collected in grab samples. Sea Potatoes use the spines which cover their bodies to burrow into the sand, where they feed on organic debris amongst the sediment. 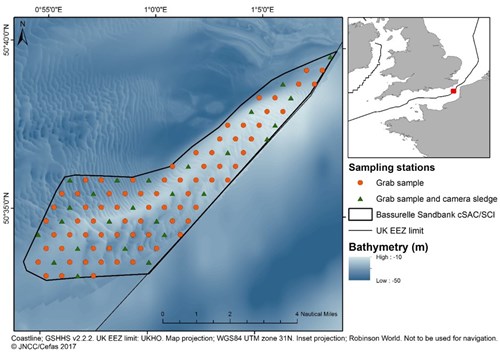 Grab and camera sledge sampling stations at Bassurelle Sandbank (note that some grab stations were visited more than once).

In total at Bassurelle Sandbank, 140 grab samples were collected, along with 26 video transects. The information that these samples tell us about the communities of organisms that make this sandbank their home will help JNCC and Cefas to understand how to better protect this site and ensure its condition is maintained and improved.

At Wight-Barfleur Reef the survey objective was to collect images of the rocky reefs that occur at the site, as well as the animals that inhabit them. As with Bassurelle Sandbank, this information will be used to monitor the condition of the site.

The first job was to collect acoustic data to enable our scientists to identify areas likely to have reef so that a camera could be lowered down to examine the habitat. As Wight-Barfleur Reef is so big, sampling took place within a few more manageable-sized boxes inside the site boundary. 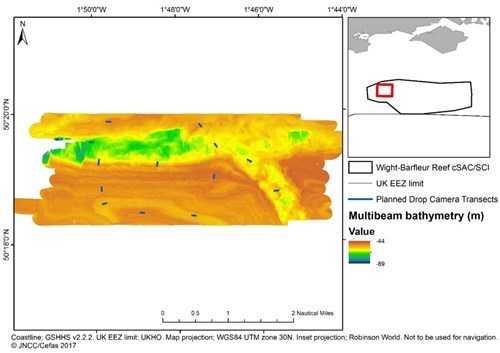 Example map of one area of Wight-Barfleur Reef visited on this survey. This is to demonstrate how drop camera stations are planned by first collecting blocks of acoustic data.

The HD video and still images revealed a diverse community of sponges and bryozoans, as well as animals that use the reefs for shelter and as a feeding ground. 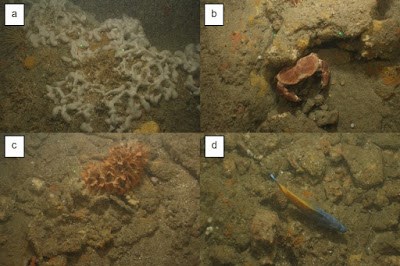 In total 82 drop camera transects were completed and acoustic data was acquired from ~170.5 km2 of seabed.

Having attained all the samples needed, the survey came to an end. Work will now begin on analysing the samples that were collected, which will help us monitor the site over time. JNCC would like to thank all those involved who helped make this another successful JNCC/Cefas partnership survey. 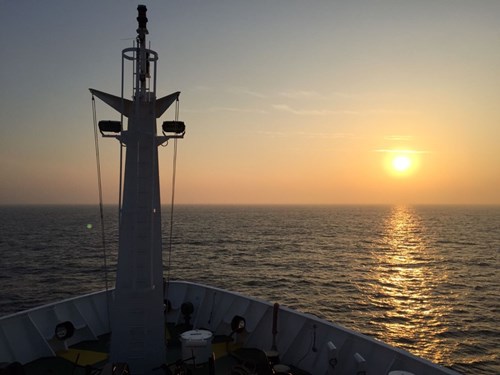 Heading west towards the sunset and our final stop on this survey at Falmouth. Image © JNCC/Mike Nelson.