Most people associate sponges with a nice bubble bath. Chances are, however, that the sponge you have sitting in your bathroom has little in common with the sponges that we are seeing at the bottom of the Faroe-Shetland Sponge Belt MPA. Most of all because the sponges we are seeing here are alive!

Their Latin name – Porifera – means 'pore bearer'. Which pretty much describes the general look of a sponge. They are one of the most rudimentary forms of animal life, and are lacking a nervous, digestive and circulatory system.

Sponges are built a little bit like a peanut butter sandwich, in that they have two layers of cells filled with a jelly like substance called mesophyl which is the glue that holds the rest together. This glue is often supported by needles made out of fibres, silica or calcium carbonate which are unique to each species of sponge and act akin to scaffolding.

The sponges in the Faroe-Shetland Sponge Belt MPA come in all shapes, sizes, and colours. Here are some examples of the sponges we have seen with our underwater camera 500 m below the surface. 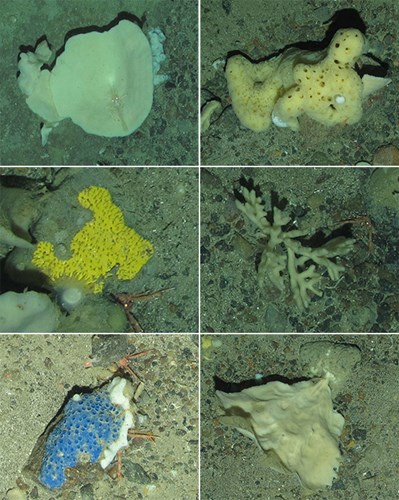 Photographs (from top left to bottom right): 1 – This funnel shaped sponge makes a nice shelter for a shrimp; 2 – A large, yellow, porous sponge; 3 – A bright yellow sponge grows in a thin layer over a rock; 4 – A branching sponge; 5 – A vivid blue sponge growing over a rock, which is also home to a pair of squat lobsters; 6 – This large fan-shaped sponge reaches up into the currents flowing across the seabed. (Photos © JNCC/MSS 2021)

The sponges here can form extensive three-dimensional structures which can be a home and shelter for a myriad of small little critters living in the same area. As well as enhancing biodiversity, sponges filter feed, eating bacteria and small particle in the water column. We are enjoying giving these sponges our undivided attention on this survey!

Stay tuned to our blog and follow @JNCC_UK on Twitter to find out more about this survey.