JNCC and Cefas are currently on site at Pisces Reef Complex cSAC on the RV Cefas Endeavour to gather evidence for monitoring and to improve our ability to map the extent of the habitats found at each of the three reef areas in the site. In order to differentiate between exposed reef areas and those covered by a layer of mud, we’ve been using a sub-bottom profiler system known as a chirper, which uses sound to penetrate the seabed surface to identify the substrate layers within. 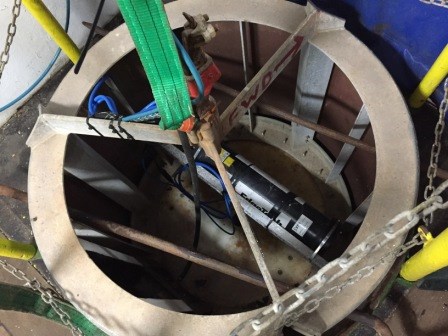 The chirper deployed through the ship’s ‘moon pool’. ©JNCC/Cefas, 2016

The chirper produces sounds that can interfere with cetacean species (whales, dolphins and porpoises), which rely on sound for foraging, navigation and communication. To mitigate this impact, we have on board a Passive Acoustic Monitor (PAM) and a Marine Mammal Observer (MMO). Gareth, our PAM from Gardline, takes the night shift, detecting the sounds these animals produce by using submerged underwater microphones (or ‘hydrophones’) to identify if they are in our 500m mitigation zone. During daylight hours, James, our MMO, takes the reins from the bridge to visually monitor for animals in advance of any acoustic operations. If a detection is made during the specified time prior to operations, work is paused until the animals have moved to a safe distance. If the all clear is given, the sub-bottom profiler is initiated with a ‘soft start’, using low power and slowly ramping up until the desired operating power is achieved, giving any remaining animals within earshot a chance to move away.

The first two shifts were clear, with no cetaceans gracing our presence despite the perfect conditions for spotting on the surface.  Our first detection occurred during the second PAM shift before the acoustic gear was switched on. The normally steady green sound waves on the display started dancing with shapes and colours, as dolphin whistles came through the headphones (see picture below).

So what does a dolphin look like in the world of PAM? 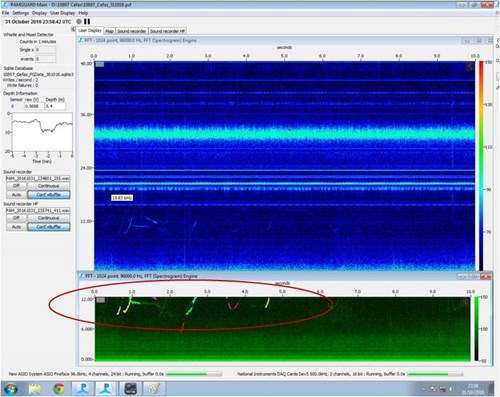 Screen grab from PAM software; the coloured lines and shapes shown above are produced by the whistles made by the dolphins, and in this recording, there were clearly at least two animals whistling, given the proximity of the sound profiles. ©JNCC/Cefas, 2016

Fortunately, the dolphins only stayed long enough to provide some excitement for the staff on board, but not so long that the work was significantly delayed. A great example of how acoustic mitigation can be applied to ensure a balance between getting the job done, but not to the detriment of our magnificent megafauna.