What is living beneath the waves? Blog #3

We’ve had three nights of towing the chariot at different depths at Faroe Shetland Sponge belt NCMPA and three days sampling the fish and benthic fauna. We’ve seen a lot of sponges, bizarre invertebrates, and fish.  We’ve also recorded many hours of video and are starting to build a good picture of the depths at which the narrow band of sponges starts and ends. 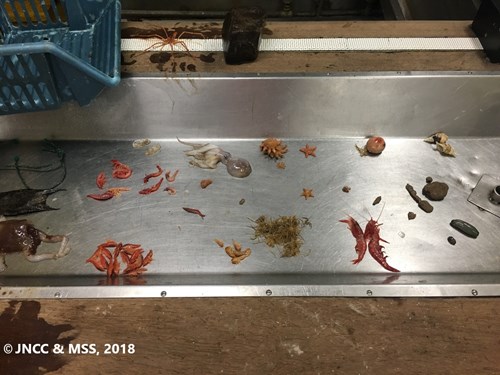 Whilst steaming to Rosemary Bank Seamount NCMPA, we spent some time looking at the video data collected to decide where to deploy our drop-down camera on the second leg of the survey.

The weather forecast doesn’t look too good for the next few days. The swell is expected to increase to 3.5m, which will be too high to operate the chariot effectively and, more importantly, too high for Jessica to operate effectively! It’s likely that we will lose one night of survey time due to this, so we will need to re-evaluate our plans.

Survey Fun Fact:
Seasickness, or motion sickness, results from an imbalance of motion detected by our ears and other internal sensors, and what we visually perceive. Whilst travelling through the Bay of Biscay Darwin wrote to this father: “Nobody who has only been to sea for 24 hours has a right to say, that sea-sickness is even uncomfortable. The real misery only begins when you are so exhausted that a little exertion makes a feeling of faintness come on” (Darwin Correspondence Project). He speaks of the relief of raisins to address his hunger… perhaps the team on board the Scotia should give these a go if the swell picks up!