On October 29th, Laura, Neil and I made the long journey from Peterborough to Shetland to join the MRV Scotia and crew, ready to get involved in leg two of the offshore seabed survey. It was pretty darn chilly in Lerwick, but we were raring to go and conditions looked good (as did we!). 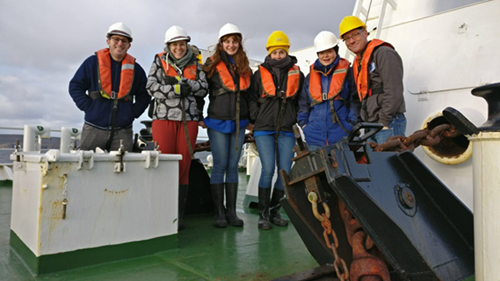 We set sail from Shetland at 10am on Monday, October 30th and made our way out to the Wyville Thomson Ridge Special Area of Conservation. This protected area sits about 150 kilometres off Cape Wrath in Scotland, has an area slightly larger than Shetland itself, and is home to some pretty cool marine life. The ridge is a rocky plateau in the middle of the ocean which has areas of bedrock, boulders, cobbles and gravel, made by huge glaciers ploughing into the seabed at the end of the last ice age. It might not sound like a very glamourous place to live, but the rock, boulders and cobbles provide the perfect surface for many seabed creatures to cling on to. 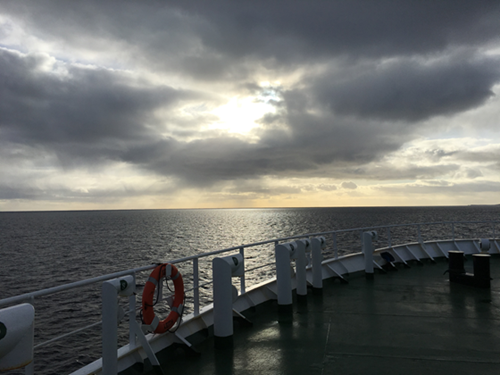 We arrived at the site at about 4:30am on Tuesday, October 31st and plunged our camera system into the depths of the Atlantic Ocean to see what we could find. Laura, Joey and I are part of the night-shift team working midnight to midday, so there’s a lot that goes on in the wee small hours of the morning, in complete darkness… with a coffee (or seven!) in hand. Once our camera arrived on the seabed, expertly controlled by our Marine Scotland colleagues, we eagerly waited to see what the site had in store.

So far, we’ve seen some brilliant examples of many kinds of colourful deep-sea sponges, sea cucumbers, starfish, anemones, sea urchins and fish. The ‘drop camera’ lets us take video footage of the seabed and still photographs so that we can identify the marine life in more detail. The kit works perfectly as long as the sea isn’t too rough – but the North Atlantic in November isn’t known for its calmness, and some poor weather conditions soon blew in (thankfully we all had our sea legs by that point!). 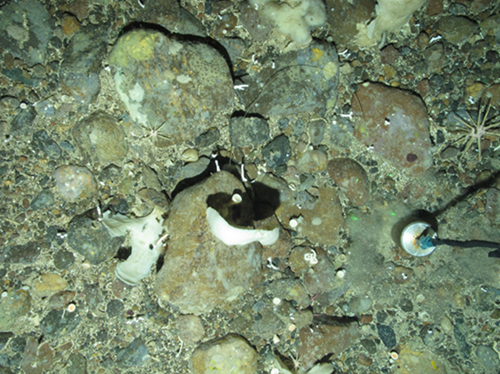 The hard substrate is an ideal habitat for many seabed species. © JNCC/Marine Scotland 2017. 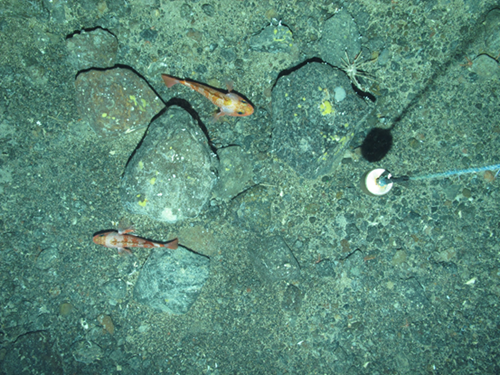 Having stuck it out for many choppy hours at Wyville Thomson Ridge, we decided to move to a slightly more sheltered site closer to shore so that we could keep working in the poor weather. The site selected was the West Shetland Shelf Nature Conservation MPA. We don’t yet have a good understanding of the sediments and biological communities that live in this protected site, so it was a great opportunity to take a more detailed look using our seabed grabbing gear. We also got a fleeting visit from some inquisitive common dolphin during the night shift, a welcome sight for our bleary eyes!

The Scotia team will be working non-stop, around the clock to make sure we get the most out of this survey trip, whatever the weather throws at us. Collecting information on the biological communities in these unique and exciting offshore sites is really valuable for advice and conservation, as often little is known about what’s living deep beneath the waves (apart, of course, from Sid the stonecrab). 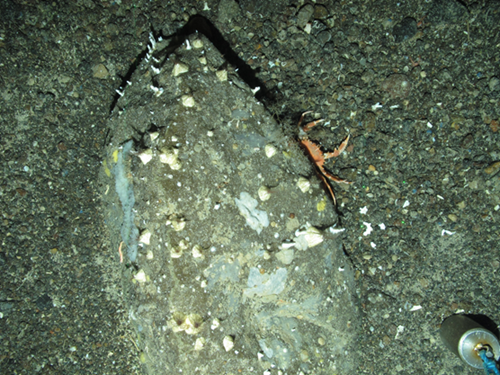 Plenty of hiding spots in the deep sea! © JNCC/Marine Scotland 2017. 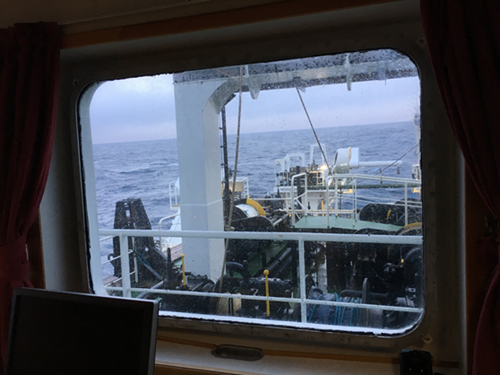 To find out more information about the Wyville-Thomson Ridge, check out the JNCC Site Information Centre.