All eyes on a new worm species 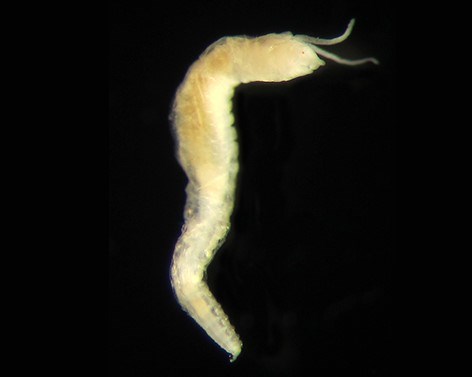 There’s a worm at the bottom of the sea – and it’s been discovered off the Scottish coast by a team of scientists from the Joint Nature Conservation Committee (JNCC), Marine Scotland Science (MSS) and Thomson Environmental Consultants. But this isn’t an ordinary worm – the newcomer has a unique anatomy with its eyes in its head and in its bottom.

This new species, now given the scientific name Ampharete oculicirrata, was collected by scientists from JNCC and MSS whilst surveying the West Shetland Shelf Marine Protected Area. The West Shetland Shelf MPA has been designated to protect a wide variety of important sand and gravel habitats and is equivalent in size to the Cairngorm National Park. The survey was the first to explore the animals within and on the seabed in this area and marks the beginning of a programme of long-term monitoring. As part of this undertaking, sandy areas of previously unexplored seabed were targeted for detailed examination by the scientists on board the research vessel MRV Scotia. During the identification process back onshore it became apparent that a completely unknown species of worm was present.

The worm was identified by a team led by Ruth Barnich of Thomson Environmental Consultants, Julio Parapar from the University of La Coruña and Juan Moreira from the Autonomous University of Madrid. Now it’s been officially identified, our wiggly friend has found a new home in the collections of National Museums Scotland in Edinburgh.

“This new species is an exciting and interesting addition to the work we do in Marine Protected Areas. The fact that it was found in relatively shallow depths, relatively close to the Scottish coastline, shows just how much more there is to understand about the creatures that live in our waters.

“I’m excited about future JNCC and Marine Scotland surveys and what they may reveal. And it’s great that specimens of the new species have been acquired by National Museums Scotland and are available for future studies.”

Ruth Barnich, a Principal Scientist in the marine team at Thomson, said:

“It’s always fascinating to work on offshore samples. In those collected by JNCC and MSS at 100–600 metres depth, we saw many rare and unusual species which are typical of deeper waters, such as brittle stars and various polychaetes and shrimps.”

A scientific paper detailing the find in full has just been published in the June edition of the European Journal of Taxonomy (No 531 (2019)).

Full version of the Press Release.