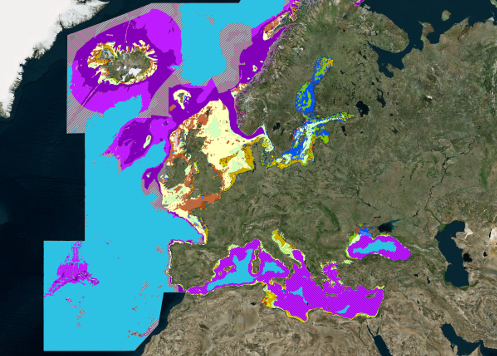 Marine data collection, storage and access in Europe has been carried out in a fragmented way for many years, focussed on the needs of individual private and public organisations, often in isolation from each other.

The European Marine Observation and Data Network (EMODnet) is an initiative from the European Commission Directorate-General for Maritime Affairs and Fisheries (DG MARE) as part of its Marine Knowledge 2020 strategy. Its purpose is to provide long‐term access to high-quality marine data covering all European coastal waters, shelf seas and surrounding ocean basins, and to make that data interoperable and freely available for all marine data users, including policy makers, scientists, private industry and the public. This is the only programme collating all this information for whole of Europe.

This is being achieved through seven discipline-based ‘themes’, delivered by a network of organisations working together to observe the sea, process the data according to international standards and make that information freely available as interoperable data layers and data products.

As an organisation at the forefront of broad-scale habitat mapping and data sharing in Europe, JNCC has been involved in the seabed habitats ‘theme’ of EMODnet since its inception in 2009, and as lead partner for two of its three phases to date. This has included the third phase (2017-2019), during which JNCC has led and co-ordinated the contributions of 12 partners from across Europe.

In additional to general project leadership, JNCC has led the creation of EUSeaMap in the North-East Atlantic and Barents Sea, and led the development and maintenance of the EMODnet Seabed Habitats portal and map viewer.

Since 2009, EMODnet Seabed Habitats has been developing, improving and gradually increasing the coverage of a broad-scale physical habitat map for Europe's seabed, also known as EUSeaMap.

EUSeaMap is a predictive habitat map which covers the seabed of large area of European waters. The mapped area includes; the Baltic Sea, Mediterranean Sea, Black Sea, the North-East Atlantic and the Barents Sea.

The collation of all types of seabed habitat data (habitat data points from surveys, over 800 habitat maps from survey, and model outputs of single habitats) from all over Europe at the best available resolution is the most innovative strand of work during the latest phase of the project. These datasets, together with EUSeaMap, are creating a multi-resolution digital picture of the entire seabed of Europe providing highest resolution possible in areas that have been surveyed.

Associated information on confidence is also available which provides confidence scores for both broad-scale maps and maps from survey.

All of this information is accessible through the EMODnet Seabed Habitats website – a permanent single portal for accessing seabed habitat data in Europe.

A key service is the Map Viewer – a free, interactive mapping portal for viewing, downloading and exporting the comprehensive seabed habitat data – as well as input data layers to the broad-scale mapping such as energy and light penetration at the seabed. Users can build a query based on specific criteria such as geographic area, data layer or specific habitat. Alternatively, users can simply browse for information using the icons provided.

Examples of the use of EMODnet Seabeds Habitats to date include offshore industry environmental impact assessments, such as for the first submarine electricity interconnection to carry surplus wind farm production from Spain to France. Its data has also been used for MPA network assessments for countries including Italy and the UK to determine OSPAR compliance.

JNCC is keen to encourage more use of the data from this project across marine private industry users.

The next phase of EMODnet Seabed Habitats will see further improvements to the broad-scale seabed habitat map for Europe (EUSeaMap) and an even more comprehensive collection of habitat maps and points from surveys.

As the collections grow, opportunities to make useful new products out of these disparate data sources will become apparent, such as products showing the best available data on the extent of particular habitats of interest for all of Europe.