‘People need birds and birds need people to do the right things’: David Stroud made honorary patron of AEWA 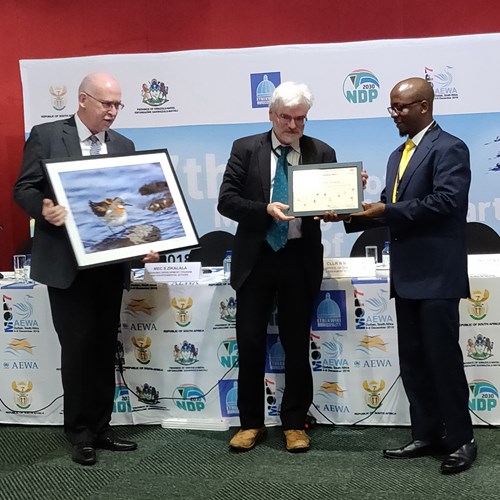 At JNCC we have always known that David Stroud MBE, our senior ornithologist, is one of our greatest assets. His expert knowledge and the value of his work on national and international treaties are immeasurable.  Therefore, we were delighted that at this year’s African-Eurasian Migratory Waterbirds Agreement (AEWA) Meeting of Parties in South Africa, David was made an Honorary Patron, an award only ever bestowed once before, to Gerard Boere, the Father of AEWA.

This is not the first award David has received from AEWA. Back in 2005 he was awarded the very first AEWA Waterbird Conservation Award which recognised his significant contribution towards long-term conservation and sustainable use of waterbirds in the African-Eurasian region. David’s relationship with AEWA spans most of his working life. He was instrumental in the early stages of AEWA in the 1980s, has been a member of the UK delegation since 1999 and played key roles ever since. He has actively participated in the work of the AEWA Technical Committee, chaired many of the working groups using his expert scientific knowledge to contribute widely, in particular to the topics of offshore wind farms, lead shot poisoning and wildlife disease.

In his acceptance speech David warmly thanked the organisation and delegates in Durban, many of whom have become friends over the years. He stressed the vital roles that AEWA fulfils, most importantly the restoration of threatened waterbird populations. In any spare time he has, David has focussed his scientific interest in the Greenland White-fronted Goose, spending summer holidays 'off grid' in Greenland and publishing many articles and papers.

In fact, this has been a year of awards for David. In October, the British Trust for Ornithology (BTO) presented him with The Marsh Award for International Ornithology which is awarded to an individual scientist whose work on the international stage has had significant influence on British ornithology.