The Government of Anguilla is pleased to announce that Sombrero Island has been officially recognised as a wetland site of international importance through Ramsar site designation. The island now joins a network of over 2,300 sites that conserve and protect some of the world’s most significant wetlands. As a Ramsar Site, Sombrero Island’s status as a wetland of international importance and a key biodiversity site is raised, increasing opportunities for eco-tourism and fundraising for wetland and site management. 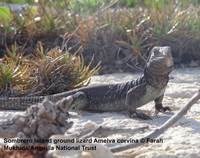 The Honourable Curtis Richardson with responsibility for Environment said: “This week the Government of Anguilla, through the Ministry with responsibility for Environment is pleased to announce that Anguilla has formally designated its first RAMSAR site, Sombrero Island and now joins other members of the global community.”  Hon Richardson continued, “We are really pleased and excited that we were all able to achieve this output through the Ramsar Small Grant Fund and the support of Government of Anguilla and its agencies working together collectively.”

Lying 65 kilometres northeast of Anguilla, Sombrero Island is a 38-hectare flat-topped limestone outcropping situated in the middle of the Anegada Passage. Mid-way between Anguilla and the British Virgin Islands its isolation from any other landmass has made it one of Anguilla’s hidden treasures – an island rich in history, colourful stories, and biodiversity.

In 2005, Sombrero Island was identified as an Important Bird Area and, in 2007, the Government of Anguilla declared the island and its surrounding waters a Nature Reserve Marine Park. Over the last three years, the Anguilla National Trust has been working with the government to further designate the park as Anguilla’s first Ramsar Site. This designation recognises the Government of Anguilla’s commitment to protect the island’s regionally-rare wetland type, containing both human-made and marine/coastal karst systems, its globally and regionally significant seabird nesting populations, as well as its endangered and endemic reptiles.