Monitoring the Stars of the Night

As nocturnal flying mammals, bats are often out of sight and therefore out of mind for the majority of people. Thanks to the hard work of thousands of dedicated volunteer citizen scientists involved in the National Bat Monitoring Programme (NBMP), we are able to see how 11 of the 18 resident bat species found in the UK are faring. The NBMP has been running since 1997 and today sees the launch of the latest State of UK’s Bats report. The latest trends indicate that populations of the bat species we are able to monitor are stable or recovering,The state of the UK's Bats 2017 which suggests that current legislation and conservation action to protect and conserve bats are having a positive impact on bat populations and should be continued. It should be remembered that these trends reflect relatively recent changes in bat populations (since 1999 for most species). It is generally considered that prior to this there were significant historical declines in bat populations dating back to at least the start of the 20th century. Many pressures on bat populations still remain, including roost and habitat loss, increased urbanisation, impacts of artificial lighting, and wind turbines, where they have been installed and managed inappropriately. 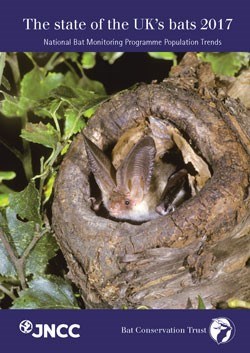 The data used in The State of UK’s Bats have been collected by a volunteer force of over 1000 people who count bats in a number of different surveys across the UK. Anyone can take part, since different surveys are suitable for different levels of experience, from beginners to experts. Many of the species monitored are found in both urban and rural areas which means you can get involved regardless of whether you live in a large city like Manchester or the remotest part of Scotland.

In addition to producing species population trends, the data collected via the NBMP are used to better understand how bats use our landscape and to provide practical recommendations on how landscapes can be improved for bats. Bats are a vital part of our native wildlife, accounting for almost a third of all mammal species in the UK and occupying a wide range of habitats. They can tell us a lot about the state of the environment, as they are indicators of healthy ecosystems which are important for a wide range of species, are greatly valued by society and have proven benefits for human health.

Dr Kirsi Peck, JNCC’s Biodiversity Support Officer: “The report published today indicates that the protection measures afforded to UK bats are working. The NBMP’s high-quality evidence on bat population trends is an important corner-stone to the advice we give to support decisions that affect the environment bats rely on.”

Philip Briggs, BCT’s Monitoring Manager: “In the UK we are fortunate to have an amazing conservation volunteering culture and it is thanks to the dedication of our many volunteers that we are able to track how more than half of our native bat species are faring and make exciting new discoveries about these fascinating mammals.”

The NBMP is run by the Bat Conservation Trust, in partnership with the Joint Nature Conservation Committee, and supported and steered by Natural England, Natural Resources Wales, Northern Ireland Environment Agency, and Scottish Natural Heritage. We are extremely grateful to all the dedicated volunteers who have taken part in the NBMP since its inception and without whom we would not be able to monitor how bats are faring across the UK.

To find out more about how you can encourage bats in your garden: http://www.bats.org.uk/pages/encouraging_bats.html