Designation of the West of Scotland Marine Protected Area

The West of Scotland MPA is the largest Marine Protected Area in Europe, and protects a diverse marine landscape to the west of Scotland; from the steep gradient of the continental slope, across the sediment plains of the Rockall Trough, to the slopes of George Bligh Bank and Rockall Bank. The site also includes two isolated seamounts (Anton Dohrn and Rosemary Bank Seamount) created by extinct volcanoes. The MPA encompasses a range of species and habitats including deep-sea sponges, deep-sea muds and cold-water coral reefs as well as species such as long-lived gulper sharks and orange roughy.

The deep seas around Scotland are home to some of the most vulnerable and diverse habitats and species on Earth. The designation of this site by Scottish Ministers reflects the important role the Scottish marine environment plays in protecting these habitats and species.  This site makes a significant contribution to the protection of unique deep-sea ecosystems in the seas around Scotland. Their protection ensures the MPA can provide a range of benefits to society, including nutrient cycling and carbon storage. 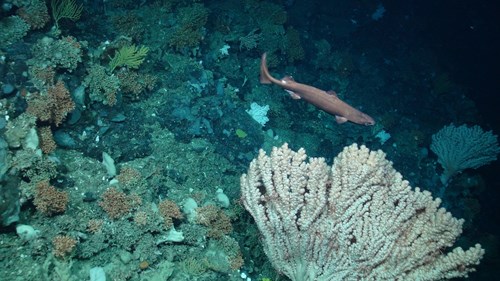 More information on the West of Scotland MPA and its protected features can be found on JNCC’s published Site Information Centre.