The Eastern Mournes Wildfire Project has adopted a partnership approach to managing the landscapes of the Eastern Mourne Mountains, aimed at limiting the probability and impacts of wildfires on wildlife, ecosystems and water quality. 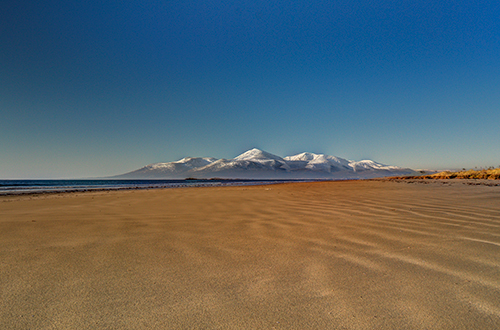 The Eastern Mourne Mountains in County Down rise from the sea on the south-east corner of Northern Ireland. As well as being a major water catchment, the area is designated for its upland habitat and geological features and receives tens of thousands of visitors every year.

In the past, the heather, gorse, and grass-clad slopes grazed by mountain sheep were not as susceptible to wildfire due to the wet climate. However, more recently the number of larger wildfires has risen which destroy huge swathes of valuable habitat and destroy the eggs of ground-nesting birds.

A large fire in April 2011 inspired the development of a pilot wildfire project covering 7,000 hectares. It was funded jointly by Northern Ireland Water (NIW), the Northern Ireland Environment Agency (NIEA), and Northern Ireland Fire and Rescue Service (NIFRS) and supported by the Mourne Heritage Trust (MHT), the body responsible for the Mourne Mountains AONB. 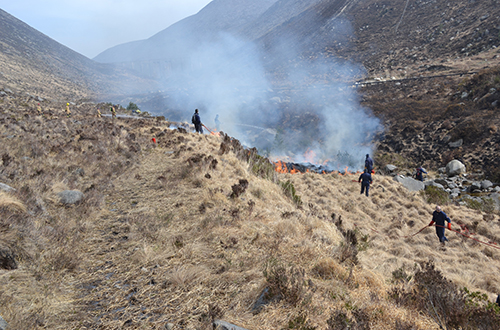 The Mourne Wildfire Group was established with the ambition to limit – as far as possible – the vulnerability of the landscape and water resources to contamination caused by wildfire, either as a direct result of fire or by the damage caused to the soil layer within the water catchment area.

The group commissioned a report by the Wildfire Advisory Service, which employed computer modelling to identify fire pathways and prioritise management measures.

Published in 2012, it concluded that along with developing a site wildfire plan and enhancing emergency response capacity, the most effective approach would be to carry out land management, including prescribed burns, in areas identified as ‘gateways’. By reducing the vegetation cover or fuel load in these areas, it would slow down a blaze and give firefighters a chance to control it. It also recommended the use of “operational burns” as an advanced tactic during a wildfire.

These choke points have been managed by Mourne Heritage Trust and local landowners with support from NIEA and NIFRS. The choke points only manages 26 to 30 hectares of the Mourne Mountains yet this small area of management influences the fire behaviour throughout an area of approximately 7,000 hectares.

At each of the identified choke points, vegetation was assessed, and a local management regime agreed including prescribed burning, grazing or a combination of both. To date, four of the five choke points are in place and actively managed by MHT. Members of the MHT underwent training in Catalonia in the tactical use of fire and to learn how prescribed burns can be used specifically for fuel management to help mitigate wildfire damage and in firefighting.

Only one choke point remains to be managed: however due to the uniqueness of its alpine habitat which would be severely damaged through a regime of prescribed burning and controlled grazing other options for this local are being explored including developing another choke point above or below this location. 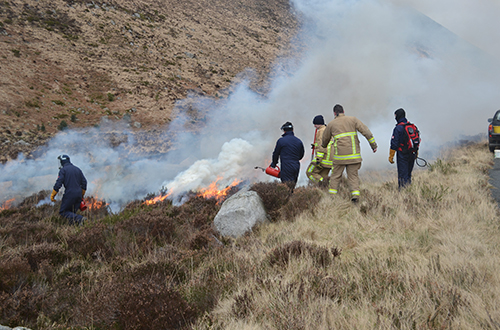 This project demonstrates how targeted intervention can deliver results at landscape scale.

It has not only benefited the landscape and ecology of the area but has also helped protect the quality of the water reaching the reservoirs in the Mournes which supply drinking water for about one third of the population of Northern Ireland.

The Fire Service have learned and adopted new wildfire fighting techniques working in partnership with ecologists and farmers. This enables the application of a wide range of knowledge and skills to managing the landscape for multiple benefits including water quality, ecosystems services and agricultural needs.

Across the wider project area, Northern Ireland Water are managing the grazing with sheep across their land holding to help reduce the vegetation height and density which will help slow and break up the spread of fire outside of the choke points.

Shared resources and knowledge have been an important development of the project which has benefited the control of wildfires beyond the Mournes. The NIFRS and NIEA now take a multiagency response to wildfires which was unheard off before the Mourne Wildfire Project.

This approach to fire and landscape management was the first of its kind in Europe and has been used as a case study for similar approaches across Europe.