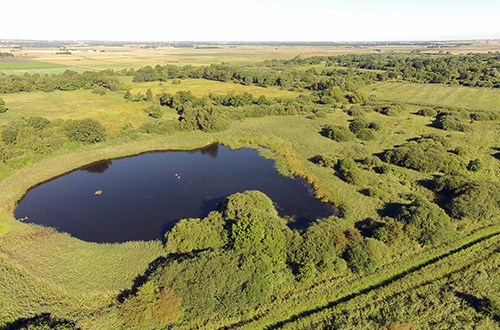 The Great Fen is an ambitious fen restoration project, with a 50-100-year vision, working across 3,700 ha of Cambridgeshire, to reconnect the two remaining ancient fen habitats of Woodwalton Fen and Holme Fen National Nature Reserves.

The area was once 'wild fen', a landscape rich in wildlife, stretching for hundreds of miles across Eastern England.

The fens were once home to beavers, otters, and thousands of different types of animals and plants, many unique to the area. When the land was drained to create peat-rich farmland. This resulted in 99% of the wild fen being destroyed.

Woodwalton Fen and Holme Fen are two of the last remnants that remained, but they were too small and isolated to continue to support the special fenland wildlife that had survived.

The Great Fen has also faced a second challenge – drainage and farming of the land has contributed to a rapid degradation of peat. This loss has meant current farming practices are not sustainable in the long term and puts local livelihoods at risk. Degraded fen peatlands also contribute to climate change, as it causes carbon dioxide to be released into the atmosphere. The area needed landscape-scale change, resulting in one of the largest restoration projects of its type in Europe. 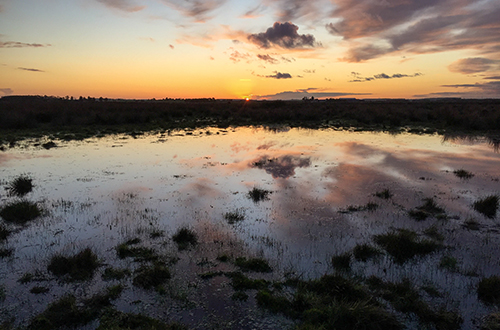 In 2001, five organisations came together to set out a vision for the Great Fen, with the aim of recovering nature, providing a wilder future for people and wildlife and creating a more climate change resilient habitat.

The project aims to create 3,700 hectares (ha) of fen landscape between Huntington and Peterborough, and achieve a landscape of many benefits by adopting a four-pronged strategy:

Using maps and images, the Great Fen Masterplan sets out how the project will deliver a wide range of benefits for the surrounding area over the coming years and decades.

Included in the strategy are plans for:

There are currently more than 1,229 ha of land in restoration and 1,730 ha managed for nature conservation.

The restoration work contributes to the reduction of peat loss, capturing carbon and saving an estimated 325,000 tonnes of carbon dioxide (CO2) from being released each year.

Actions to restore the area has also resulted in reduced risk of flooding in the locality, with particular areas providing extra water storage after heavy rainfall and helping to protect surrounding towns, villages and farmland from the risk of flooding.

Grazing of livestock has been used an effective management approach to habitat restoration, providing benefits to farmers of the fen landscape while reducing pressures on the land. Some farmers have also moved towards native cattle and sheep breeds that thrive on rough grazing.

The project has witnessed increasing numbers of wildlife, from breeding barn owls, kestrels, lapwing and snipe to rare plants and invertebrates.

However, nature conservation is not the only focus of the Great Fen project. Local communities have been linked together and connected with nature through the creation of miles of new footpaths, cycleways and bridleways.

Working with and supporting over 100 active volunteers, the Great Fen team works with thousands of people each year. As well as events, the team runs interactive schools’ programmes for all ages, a range of walks, talks and visits for groups, and many other community projects, including film, photo and audio projects. With this ongoing programme of engagement, the project continues to look at how economic benefit and social wellbeing can be delivered to local people, businesses and farmers.