A5. Integration of biodiversity considerations into business activity

This indicator shows the number of ISO (‘International Organization for Standardization’) 14001 certifications in the UK as a proportion of the total number of medium (50 to 249 employees) and large (at least 250 employees) businesses in the UK.

It is a proxy for the number of medium and large businesses in the UK that are taking steps to minimise their environmental impact as measured by the proportion of these businesses with ISO 14001 Environmental Management System (EMS) certification.

This indicator has not been updated for the 2020 publication. ISO, who provide the number of 14001 certifications, refined their 2018 survey and published 2018 results that are considered to be a better reflection of the situation of the market. However, they are not comparable to previous results due to adjustments made by some of the providers of data in relation to the number of certificates, sites and sectors. This indicator will be updated when more results from the refined survey become available.

In 2017, the number of ISO (n1) (‘International Organization for Standardization’) 14001 certifications in the UK as a proportion of the total number of medium and large businesses in the UK was 41.5% (Figure A5).

This represents a long-term increase of more than 550% since the ISO Environmental Management System standard was first introduced in 1999; a small, short-term decrease of 3% since 2012; and a similarly small increase of 2% in the most recent year for which data are available.

Figure A5. Number of ISO 14001 certifications in the UK as a proportion of the total number of medium and large businesses in the UK, 1999 to 2017. 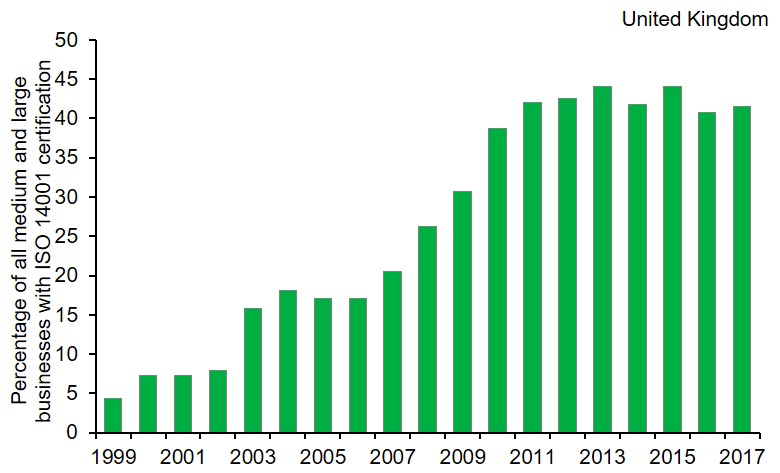 Assessment of change in biodiversity considerations in business activity

Note: The long- and short-term assessments are based on a 3% rule of thumb. The base years for these assessments use a 3-year average. See Assessing Indicators.

The government’s Environmental Protection Expenditure (EPE) survey (on which this indicator was previously based) has been revised. As a result, it is no longer possible to update the original measures for the indicator; a summary of results for earlier years can be found in the ‘Archived measures’ section of this fiche.

The revised measure for this indicator (introduced in 2019) tracks the number of ISO (‘International Organization for Standardization’) 14001 certifications in the UK as a proportion of the total number of medium (50 to 249 employees) and large (at least 250 employees) businesses in the UK. It is a proxy for the number of UK businesses that are taking steps to minimise their environmental impact as measured by the proportion of these businesses with ISO 14001 certification.

Internationally, the 2 main Environmental Management System (EMS) certification schemes currently available are ISO 14001 and EMAS (the European Union’s Eco-Management and Audit Scheme). ISO 14001 represents the core set of standards used by organisations to design and implement an effective EMS. At the end of 2017, ISO 14001 was used by more than 360,000 organisations across 181 countries and economies; more than 17,500 of these organisations were based in the UK. The requirements of ISO 14001 are also an integral part of EMAS, however, the structure and material requirements of EMAS are more demanding, mainly concerning performance improvement, legal compliance, and reporting duties. In September 2018, there were 3,822 organisations with EMAS registration across the EU, only 14 of which were based in the UK.

Alternative EMS options include (i) BS (British Standard) 8555, not a certifiable standard as such, but designed to provide guidance for implementing an EMS on a phase-by-phase basis and (ii) ‘in-house’ EMSs that are not officially certified.

Decisions made by businesses of any size within key sectors such as agriculture, forestry, industry, housing and infrastructure development, water supply and fisheries can have significant biodiversity impacts. Information on how biodiversity considerations have been integrated into agriculture, forestry and fisheries is included in other UK indicators but additional sectors were not adequately covered elsewhere in the indicator set. This indicator aims to provide information on the biodiversity considerations of businesses across all sectors. UK production and consumption has an impact within the UK as well as overseas.

Environmental management has become a core business issue for many organisations. Minimising the amount of waste that is produced, reducing energy consumption and making more efficient use of resources can all help to protect and enhance the environment, in addition to leading to financial cost savings.

It is challenging to develop a universal measure that captures business interaction with biodiversity. Businesses can have direct and indirect impacts on nature, influenced by a wide variety of factors including resource consumption, land use, emissions/pollution, supply chain impacts and sourcing. The use of an EMS has been chosen as a proxy to measure the proportion of businesses that are taking steps to manage their environmental impacts. There are a number of regulatory and market drivers that may influence a company’s decision to adopt an EMS, however the adoption of an accredited and audited EMS demonstrates that a company is willing to track the implications of its operations on the environment. According to the ISO (2015),

It requires that an organization considers all environmental issues relevant to its operations, such as air pollution, water and sewage issues, waste management, soil contamination, climate change mitigation and adaptation, and resource use and efficiency.

Therefore, while many companies may not measure their specific biodiversity impacts as part of an EMS, steps that are taken to reduce resource consumption, energy, waste, emissions and pollution offer benefits to the environment and ultimately reduce pressures on biodiversity.

b. Environmental consideration in supply chains

The 2 historic measures for this indicator are presented here for reference but given that they can no longer be updated, both will be permanently removed from the fiche during the 2020 update of the Biodiversity Indicators. They show the percentage of large businesses surveyed in the original EPE survey that operated at least one EMS, and the percentage of large companies that formally considered the environment during procurement and contract management relating to their supply chain.

The EPE survey collected data from large and small businesses on an annual basis. Smaller companies (with less than 250 employees) were not surveyed every year and there was less consistency over time. Therefore, small companies were not included in this indicator.

Overall, 53% of the large companies responding to the survey in 2013 had an EMS certified to ISO 14001 and 24% of respondents had an EMS in place which was not externally certified (i.e. it was developed and implemented to meet “in-house” needs).

Figure A5ai. Percentage of large companies in the UK that use an Environmental Management System, 2011 to 2013. 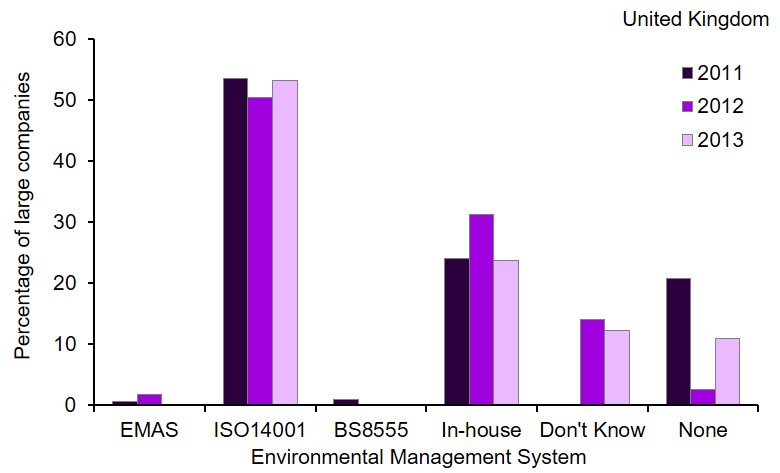 Figure A5bi. Percentage of large companies in the UK that consider environmental issues in their supply chain, 2012 to 2013. 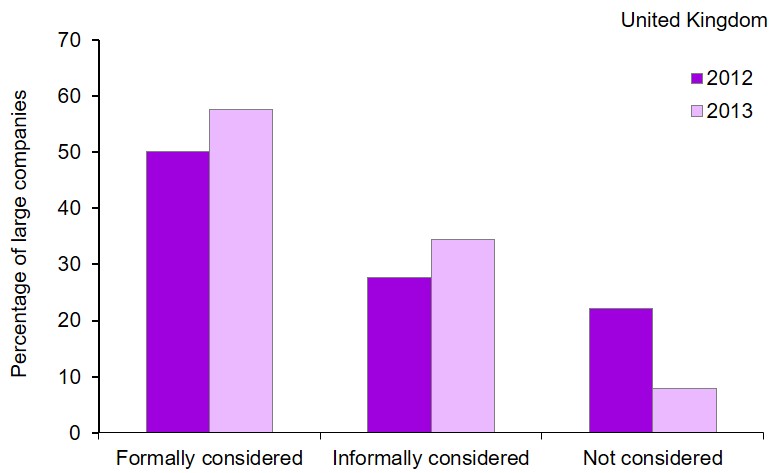 The original EPE Survey collected data on how much businesses spent on environmental aspects of their business. It covered a range of sectors including:

Figure A5aii shows a breakdown of EMS use by sector. It is difficult to draw strong comparisons between sectors as the sample sizes vary, however in 2013, respondents from the Food, Beverage and Tobacco sector reported the lowest EMS use (72%). The highest level of EMS use was reported in the Basic and Fabricated Metals sector where 90% of respondents confirmed EMS use. 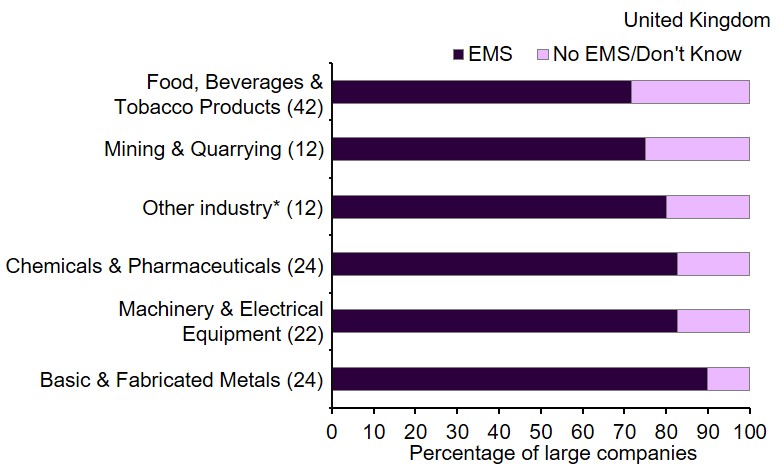 Figure A5bii. Consideration of environmental issues in the supply chains of large UK companies, by Sector, 2013. 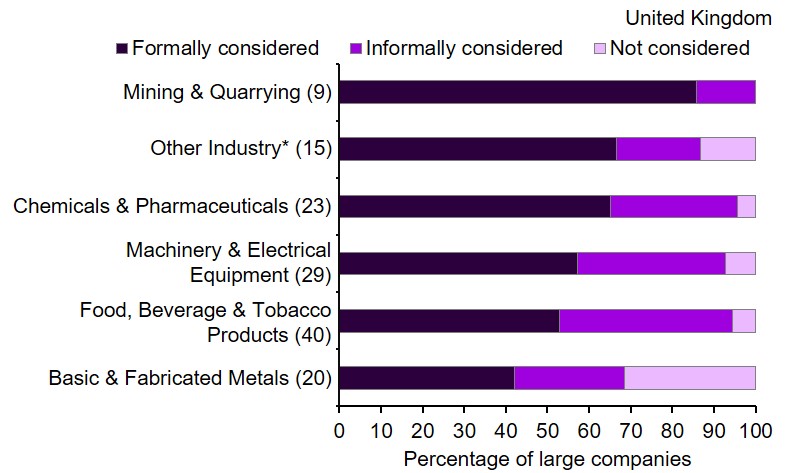 Target 3: By 2020, at the latest, incentives, including subsidies, harmful to biodiversity are eliminated, phased out or reformed in order to minimize or avoid negative impacts, and positive incentives for the conservation and sustainable use of biodiversity are developed and applied, consistent and in harmony with the Convention and other relevant international obligations, taking into account national socio‑economic conditions.

(n1) Because 'International Organization for Standardization' would have different acronyms in different languages the organisation is known by the short form ISO. ISO is derived from the Greek isos, meaning equal.