The combined inputs of all six of the hazardous materials included within this indicator have shown a long-term decrease of 78% since 1990. In the short term (since 2014), inputs of five out of six of these substances show decreases; one heavy metal (zinc) has increased.

Figure B5bi. Combined input of hazardous substances to the UK marine environment, as an index of estimated weight of substances per year, 1990 to 2019. 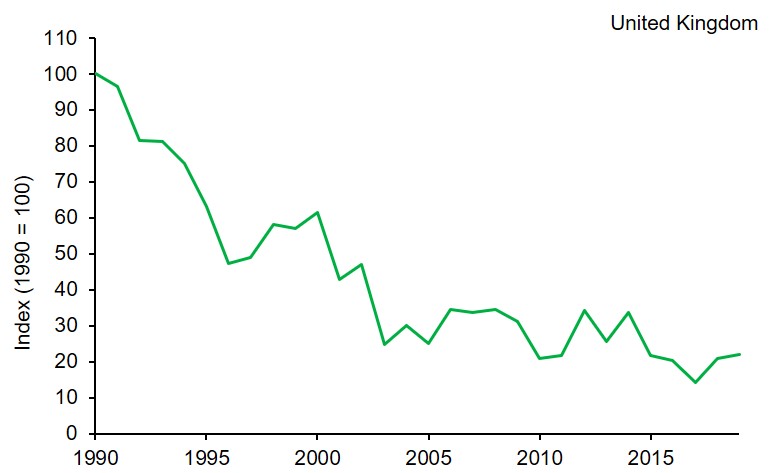 In the short term, the combined inputs of all six hazardous substances decreased by 18% from 2014 to 2019 (using a three-year average for 2014). Inputs for five out of the six of the hazardous substances declined in the short term: lindane had the highest percentage decrease (-44%), cadmium decreased by 31%, mercury by 26%, copper by 8% and lead by 6%. By contrast, zinc increased by 17%.

Inputs into the marine environment are estimated from concentrations and flow rates in rivers entering the sea and those from estuarine and coastal point sources. Riverine inputs reflect both point and diffuse sources upstream of the sampling point and tend to be strongly influenced by flow rates. Flow rates are heavily affected by rainfall patterns so year-to-year fluctuations in pollutant loads are likely.

A detailed illustration of changing levels of each input is seen in Figure B5bii. The low point in 2003 is thought to be a consequence of reduced river flows during an exceptionally dry year. Conversely, levels increased in 2012 and again in 2014 corresponding with years of heavy rainfall. In 2012, England had the wettest year since records began in 1910; the summer was the wettest since 1912 and increased rainfall in November and December contributed to extensive flooding. In 2014, the winter (January to February) was the wettest since records began.

Figure B5bii. Inputs of hazardous substances to the UK marine environment, as an index of weight of substance per year, 1990 to 2019. 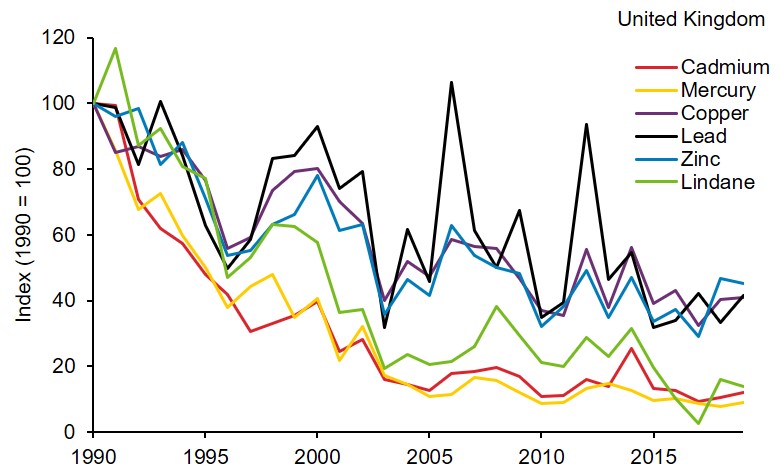 Pollution by hazardous heavy metals and pesticides can have adverse effects on the marine environment and biodiversity. Pollutants enter coastal waters either directly from point sources on UK coasts and estuaries or are carried via rivers.

One of the goals of the Convention for the Protection of the Marine Environment of the North-East Atlantic (the OSPAR Convention) is to implement the Hazardous Substances Strategy by making progressive endeavours, through appropriate actions and measures, to move towards the targets of the cessation of discharges, emissions and losses of hazardous substances by the year 2020.

While many measures have already been put in place to prevent these persistent contaminants from entering the environment (for example, bans on lead in petrol, marketing restrictions on the use of cadmium and mercury, a ban on the use of lindane), there are still reservoirs of these contaminants from legacy use in soils and sediments which are mobilised by various weather events.

The assessment of change for the indicator was made by applying a 3% rule of thumb. The arithmetic mean of the first three years of the data series was compared with the last point to determine the assessment for the long-term trend, and an arithmetic mean of the year five years back in the time series and the year either side calculated to compare with the last point to assess the short-term trend.

Although data for total UK (direct plus riverine) inputs to the marine environment are available as lower and upper estimates, for ease of interpretation only upper (that is, maximum) values have been used in this assessment, rather than presentation of the data range for each substance. The values for each pollutant are converted to an index scaled to 100 at the start year of 1990, and then combined with a geometric mean.