By Kayleigh Thomas and James Albrecht

The JNCC survey team and our Marine Scotland Science colleagues have travelled to West Shetland Shelf Nature Conservation MPA in Scottish offshore waters to gather evidence to monitor the site’s condition. This monitoring is vital to assess how well the site is protecting offshore subtidal sand and gravel seabed habitats, to inform future site management measures. During our first week at sea, we have settled into boat life aboard the Marine Research Vessel (MRV) Scotia, reached several sampling milestones, and have been treated to some super cool creatures and spectacular sunrises!

Life aboard the MRV Scotia

Sampling the MPA requires a huge team of people, and partners from Marine Scotland Science including the officers and crew, the scientist in charge, two TV engineers, ship engineers, and of course the chef! Everyone has their own cabin with a bed, desk, closet, and bathroom, as well as a sea survival suit and lifejacket. Safety is of utmost importance, and everyone participated in an evacuation drill – known as a ‘Muster’ – once the ship had left Aberdeen port. 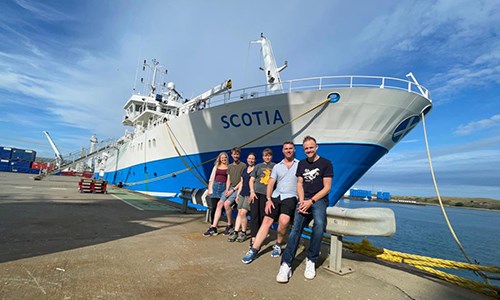 Image 1: JNCC scientists waiting to board the MRV Scotia (© JNCC).

Our goal is to sample the benthic environment by taking imagery and collecting sediment from pre-determined survey areas that we call nested boxes. Each box has 30 randomly placed equidistant sampling stations. So far, we have completed grab sampling in three survey boxes, and image sampling in two survey boxes, and we have many more to go!

At each sampling station we use a drop frame camera (Image 2) which is lowered from the back of the vessel and towed one meter above the seafloor. We watch the live high-definition video feed on monitors and take still photo images when the weight hanging down from the camera frame is about to touch the seafloor, in order to collect images from 1 m above the seabed – it takes some practice to get the images just right! The videos and images will be analysed by experts at a later date to identify sediments and epifauna (things living on the seabed). 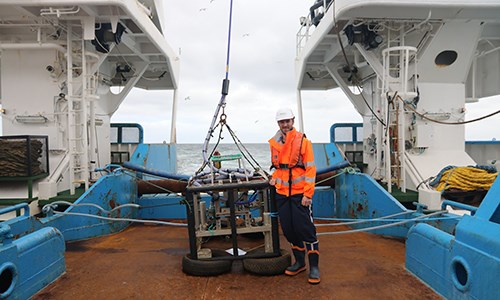 At each sampling station we also use a Hamon grab to take a sediment sample. The Hamon grab is lowered to the seafloor from the side of the vessel by the crew operating a crane (Image 3). The scoop on the grab closes against a sealing plate to take a scoop in the bucket (0.1 m2) of sediment from the seafloor, then the grab is pulled to the surface. Next, we sieve (Image 4), sort and collect the sample into pots, so that particle size, sediment, and infauna (small animals living within the seabed) can be analysed back on land. Rinsing and sieving the sediment can be quite challenging, but we are rewarded by all the fascinating creatures that are revealed! 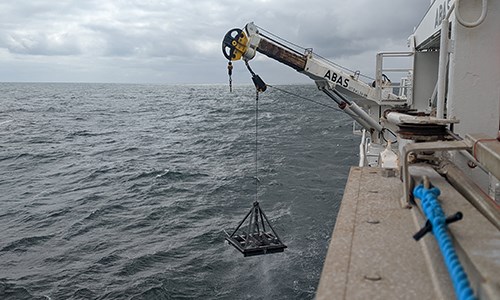 Image 3: Hamon grab being pulled up from the seafloor after collecting a sediment sample (© Kayleigh Thomas). 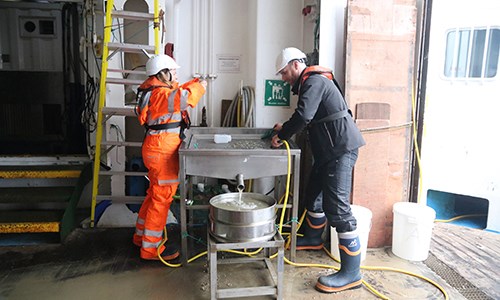 The sediment at West Shetland Shelf MPA has mainly consisted of sand and coarse sediments (which includes gravel and cobble stones). We have seen a vast variety of organisms living on the seabed using the drop camera (Image 5). These include yellow hedgehog sponges, brittle stars, and sea anemones which can grow attached to stones or by burrowing into the sediment. 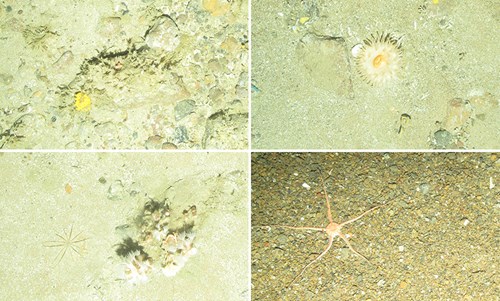 Some examples of the animals we have found living within the sediment, using the Hamon grab include marine isopods, cup corals, (Image 6) and even an ocean quahog (Image 7).

The cup corals are solitary corals that do not form reefs. They are more commonly found growing attached to rocks, but at West Shetland Shelf MPA they get by in the sandy sediments by attaching themselves to the discarded tubes created by worms. 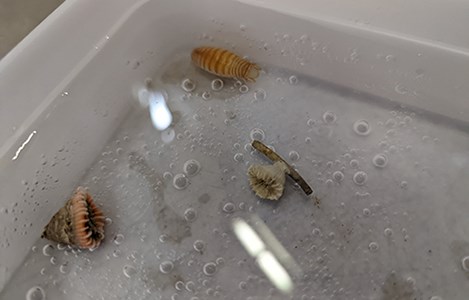 Ocean quahogs are molluscs which can live for over 400 years, and are of conservation concern due to their population declines. Adhering to our sampling protocol, we measured the ocean quahog then returned it to its rightful home in the ocean so that it can live on and reproduce to help replenish populations. 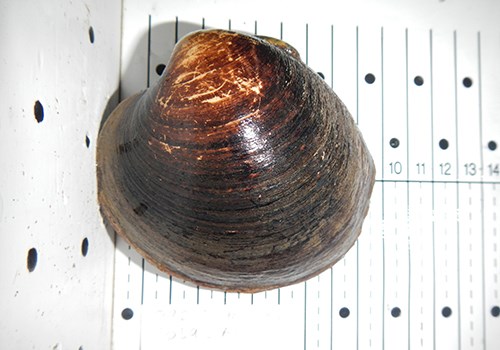 Image 7: Ocean quahog (Arctica islandica) found in a sediment sample and returned to the ocean (© JNCC).

As well as the weird and wonderful seabed creatures, the ship is frequently surrounded by Northern gannets (Image 8) and Northern fulmars. These seabirds probably think we are a fishing boat and are hanging around for a bite to eat – but unfortunately for them we are not fishing! The seabirds also take advantage of the winds passing over the vessel as she charges forward through the swell. 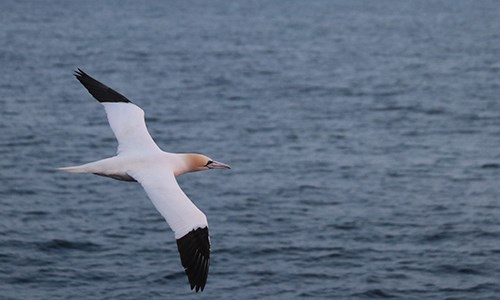 With little interference from light pollution, the sunrises and sunsets offshore are spectacular. Standing on the foredeck, we’ve watched the sky transform from purples and greys to warm pinks and oranges (Image 9), with the added serenity of dolphins in the distance. Our first week sampling West Sheltand Shelf Nature Conservation MPA has been amazing, and we are excited to complete the monitoring survey over the next week! 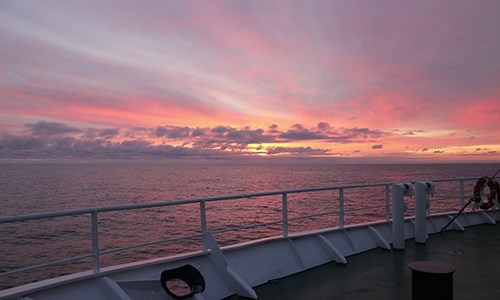