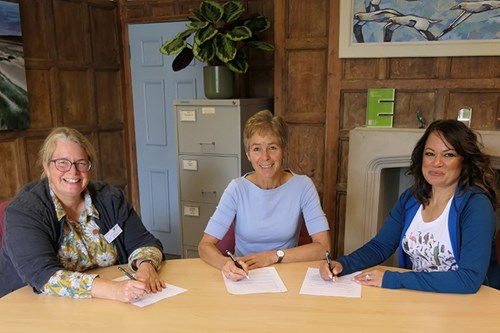 A new bird monitoring partnership agreement has been signed between JNCC, the British Trust for Ornithology (BTO) and Royal Society for the Protection of Birds (RSPB).

The new agreement, signed by the chief executives of the three leading UK conservation organisations, is a scientific partnership that covers the period 2022 to 2027 and reaffirms the organisations’ long-standing commitment to long-term bird monitoring schemes, which underpin nature conservation science and action.

Birds are recognised as indicators of changes to the wider natural world. Monitoring bird populations therefore helps us understand not only how birds are faring, but also the habitats and environments they are associated with. The evidence from surveillance schemes can be used to inform what we can do to protect and secure a better future for birds and nature more broadly. Recent results from these schemes have shown that birds such as the Swift and Greenfinch are declining in numbers in the UK, whereas others, such as the Red Kite, are increasing thanks to dedicated conservation efforts to reverse historic declines.

These schemes rely on thousands of dedicated and highly skilled volunteers who give their time to record information about our bird populations.

BTO Chief Executive, Professor Juliet Vickery, said: 'Citizen science has the power to reveal so much about birds and the natural world. Its extraordinary value also lies in the way it connects people with nature, increasing awareness and engagement at the same time as delivering recognised benefits to health and well-being.  Last year alone, our volunteers gave more than two million hours of their time to BTO work. Their dedication is remarkable, but our world is changing. Citizen science gives us exactly the kind of long-term data we need if we want to address the twin crises of climate change and biodiversity loss.'

JNCC Chief Executive, Dr Gemma Harper, said: 'Collaboration is at the heart of everything we do, and we are delighted  to continue to support this critical partnership.  Long-term surveillance programmes such as these, and the datasets they produce, have underpinned our work for over 30 years, and  are hugely important to nature conservation and recovery.  Only by identifying and understanding how biodiversity is changing can we strive for nature that is diverse, abundant and resilient.

RSPB Chief Executive, Beccy Speight, said: 'We’re delighted this vital partnership is to be renewed and developed. During this nature and climate emergency, these critical monitoring schemes enable us to identify, prioritise, and ultimately resolve the most pressing of conservation threats. Increasing participation to expand the already-impressive volunteer force will mean more data, better analysis, and ultimately stronger protection for UK nature. Together, we can really make a difference.'