Our new report – Brecon Beacons Fire Risk Modelling Tool (JNCC Report 701) – showcases how a combination of Earth observation derived products and information, and expert local knowledge can be used to better understand the impact of land management on fire risk.

Brecon Beacons National Park Authority (BBNPA) and Natural Resources Wales (NRW) sought to understand if spatially targeting land management measures (such as grazing and prescribed burning) could have an effect in reducing wildfire risk.  Under future climate change scenarios, it is likely there will be a greater risk of major wildfires with prolonged periods of dry weather predicted to increase.

The Mynydd Du in the Brecon Beacons National Park is a large common land managed by local graziers.  Reductions in grazing levels have led to concerns about the impact which changes in habitat management have had on the landscape, and especially to fire regime control.  This JNCC-led project created a spatially explicit tool to support scenario testing in order to better understand the potential impact of these changes on wildfire risk.

As part of this proof-of-concept approach, we developed a multi-criteria analysis model informed by local expertise and Earth observation data to assess the role which management practices of grazing and controlled burning have upon the likelihood that a habitat will burn.  This incorporates key factors influencing how susceptible a habitat is to burn, including habitat type, climatic and topographic factors, as well as accessibility of an area (which links to likelihood of ignition). 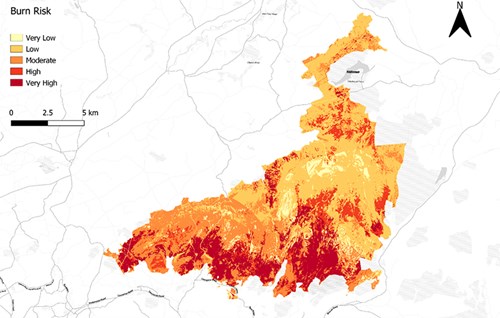 The map shows the modelled output, describing areas of very low to very high risk of burning when no management options were applied.

The modelling was integrated into an R Shiny application, available to users in both English and Welsh, allowing users to run scenarios of land use change and explore how management factors influenced their relative burn risk in the region. Working alongside our partners and engaging with local stakeholders have been invaluable in providing input into the modelling, and the decision support tool received positive initial feedback.

This project demonstrated the potential value of spatial tools to aid local decision making in prioritising land management options for reducing fire risk. By using Earth observation datasets, this provides a cost-effective way of updating information about the landscape and a potential route to scaling up the modelling to bigger areas. Furthermore, the modelling method can be developed to include more management options, such as regulating for water quality or biodiversity, and can be adapted to include climate change scenarios.