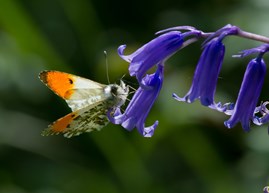 UK butterflies have been monitored annually since 1976 by thousands of volunteers as part of the UK Butterfly Monitoring Scheme (UKBMS), making butterflies one of the best monitored groups of animals in the UK. The UKBMS is a partnership between Butterfly Conservation, the UK Centre for Ecology and Hydrology, British Trust for Ornithology, and the Joint Nature Conservation Committee.

Population trends are produced for 58 of the 59 species of butterflies that occur regularly in the UK. The latest Official Statistics on UK butterflies were published on 20 March at https://www.ukbms.org/official_statistics. 2019 was the best year for butterflies for over 20 years, and four species (Chequered Skipper, Orange-tip, Brimstone, and Marbled White) had their best year on record, whilst no species had their worst year. Despite these positive results, the continuing long-term decline of some butterfly species remains a cause for concern.

Butterflies bounce back to their best year in over 20 years

The summer of 2019 has provided a welcome boost to butterfly population levels, according to the lastest results from the annual UK Butterfly Monitoring Scheme (UKBMS) led by Butterfly Conservation, the UK Centre for Ecology & Hydrology (UKCEH), British Trust for Ornithology (BTO) and Joint Nature Conservation Committee (JNCC).

In their best year since 1997, just over half of UK butterfly species showed higher population levels in 2019 compared with 2018, making it the 8th best year out of the 44-year series.

Butterflies most likely benefited from an unsually warm and wet summer conducive respectively to both a strong emergence of adults and succesful development of the immature stages preceeding this emergence.

Summer flying species which benefited included the Marbled White, which had its best year in the series with annual abundance up by 66%, Ringlet (second best year in the series, up by 23%), Dark Green Fritilary (third best year, up 51%), and Meadow Brown (fifth best, up 38%).  The rare Lulworth Skipper, restricted to the Dorset coast which has been in freefall in recent years rallied with its annual abundance up by a whopping 138%.

It wasn’t all good news for summer flying butterflies though as the Common Blue droppped in annual abundance by 54%, Adonis Blue by 40%, Green-veined White by 43% and Large White by 40% with all four species having below average years. Of particular concern is the rare Heath Fritillary, which is restricted to a tiny number of sites in southern England. This butterfly saw its annual abundance drop by 34%. This ongoing decline raises fears for the long-term future of the butterfly whose numbers have fallen by a shocking 91% due to the cessation of traditonal management practices.

Other well-performing species included several Spring flying species such as the Chequered Skipper which was up by 175%, Orange-tip, up 63%, and Brimstone, up 32%, all of which had their best year on record. The threatened Duke of Burgundy also bounced back to log its 8th best year in the series. These species were all likely to have benefitted from warmer than average spring weather, whilst the Duke of Burgundy is benefitting from targeted conservation efforts.

Professor Tom Brereton, Associate Director of Monitoring and Research at Butterfly Conservation said: “The results from the 2019 season are really encouraging and provide evidence that the overall rate of decline of butterflies is slowing and for some species being reversed. Reasons for this include positive conservation through agri-environment schemes, increased woodland cover, climate warming, increases in grazing levels by wild animals and a slowing in the rate of agricultural intensification.

“We’re really heartened to see a shift in the fortunes of many of our most loved species. Encouragingly a number of Priority Species such as Adonis Blue, Brown Hairstreak, Dingy Skipper, Large Heath, Marsh Fritillary, Silver-studded Blue, Small Blue and the Silver-spotted Skipper that have been the focus of intensive conservation efforts in recent decades by Butterfly Conservation and partners are no longer in long-term population decline.

“The long-term situation for butterflies in general does remain a cause of concern though, with more species declining than increasing since the 1970s.”

Dr Marc Botham, Butterfly Ecologist at the UK Centre for Ecology & Hydrology, said: “The analysis shows that numbers of a wide range of species benefited from a couple of warm summers in succession. In addition to record numbers of spring species such as Orange-tip and Brimstone, it was also encouraging to see annual increases in garden favourites such as Peacock and Small Tortoiseshell, both of which have had some poor years recently.

“Despite this, some wider countryside species such as Wall and Small Skipper remain at low levels compared to what they used to be.”

Sarah Harris, Breeding Bird Survey (BBS) National organiser at the British Trust for Ornithology, said: "It is great to see some good news from our natural world, with over half the butterfly species monitored showing higher population levels compared to 2018 - a welcome respite for some.

“It is thanks to volunteers that we are able to monitor butterfly populations and the BTO/JNCC/RSPB Breeding Bird Survey (BBS) is proud to contribute to the UKBMS via the Wider Countryside Butterfly Survey, whereby BBS volunteers revisit their bird recording squares to survey butterflies, moths and dragonflies.

“We are grateful to all the volunteers contributing to this project, allowing us to track the long-term changes faced by our butterfly species.”

Anna Robinson, Monitoring Ecologist at JNCC said: “The UKBMS provides an excellent evidence base to help us understand how butterflies are faring. This evidence is important to help inform environmental policy to take better account of biodiversity.

“We are really grateful for the input of the thousands of volunteers who have contributed from 1976 until today, and without whom the scheme would not be possible.”

The UKBMS has run since 1976 and involves thousands of volunteers collecting data through the summer. Last year 3,014 sites were monitored across the UK, with this record level exceeding 3,000 sites for the first time.

For more information or an interview with Professor Tom Brereton contact the Butterfly Conservation Communications Office on 01929 406025 or email news@butterfly-conservation.org

Butterfly Conservation is the UK charity dedicated to saving butterflies, moths and our environment. Our research provides advice on how to conserve and restore habitats. We run projects to protect more than 100 threatened species and we are involved in conserving hundreds of sites and reserves.

The British Trust for Ornithology (BTO) is the UK’s foremost independent bird research organisation and organises a range of annual and periodic surveys, mainly on birds, and including the BTO/JNCC/RSPB Breeding Bird Survey. Information on population trends in birds and other wildlife are provided on our website (www.bto.org) and you can follow the latest news and developments via twitter @_BTO and  @BBS_birds

The UK Centre for Ecology & Hydrology is a strategic delivery partner for the Natural Environment Research Council, part of UK Research and Innovation.
www.ceh.ac.uk / @UK_CEH

The Joint Nature Conservation Committee (JNCC) is the statutory adviser to the UK Government and devolved administrations on UK and international nature conservation. Its work contributes to maintaining and enriching biological diversity sustaining natural systems.