Congratulations to Vin Fleming – OBE for services to the environment 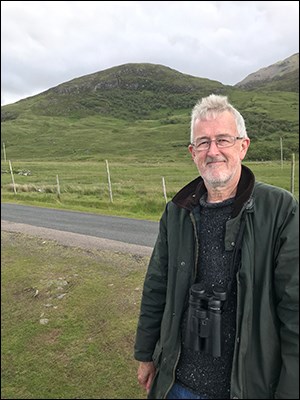 Vin Fleming, Co-leader of International Advice here at JNCC, has been awarded an Order of the British Empire (OBE) for services to the environment in the Queen’s Birthday Honours list 2022, announced today.

Over his career Vin has played a pivotal role in developing UK positions for successful negotiations at the Convention of International Trade in Endangered Species (CITES) and the Convention on Biological Diversity.

Vin represented the European Region in the Animal Committee of CITES for almost a decade, advocating strong support for evidence-based approaches to measures to achieve sustainable trade across the full spectrum of CITES-listed animals, from corals and eels to more iconic species such as sharks and leopards.

Vin also led JNCC’s work, in preparation for the UK’s exit from the EU, to develop a sustainability assessment (or non-detriment finding) for trade in European eel, building solid collaboration with Defra, other agencies and colleagues in Northern Ireland.

Vin said: "I am delighted of course to have been considered for this honour. This is not something I ever imagined would happen (or even feel I deserve)! But I am very grateful to all those of my colleagues and peers who thought sufficiently highly of me to put the time and effort into a nomination. Ultimately, anything I have contributed has been as part of a team and dependent on the support and input of colleagues."

Commenting on Vin’s achievements, Professor Colin Galbraith, Chair of JNCC said: "I am delighted that Vin has been awarded this honour in recognition of his services to the environment. This recognises the immense contribution Vin has made to nature conservation and recovery across the UK and the globe. Vin’s exceptional scientific, negotiation and diplomatic skills have helped ensure successful outcomes, based on scientific rigor, which have benefitted nature and the UK’s reputation at the forefront of nature conservation and recovery. Congratulations on a very well-deserved accolade!"

Dr Gemma Harper OBE, Chief Executive of JNCC added: "Vin’s passion for nature, scientific expertise and support for colleagues are inspiring – both to JNCC and to stakeholders across the UK and around the world. On behalf of all his JNCC colleagues, I am delighted to congratulate Vin on being awarded an OBE in the Jubilee Honours for his services to the environment. Vin’s scientific integrity and robust negotiating skills have helped the UK establish a strong reputation on the international stage. Importantly, Vin has also actively supported and coached his colleagues to help them develop their understanding of domestic and international biodiversity. Congratulations Vin!"