A wide variety of data types are acquired during offshore survey operations, including biological and geomorphological data.

Still images and video of the seabed are collected for the visual identification of seabed habitats, species, and communities.

To collect this data, digital still cameras and video cameras are sealed in underwater housings, mounted on a frame or platform, and lowered from the vessel to the seabed.

The frame or platform which the camera is mounted on can be adapted for specific survey requirements. Examples of the frames and platforms used on JNCC surveys are shown below. 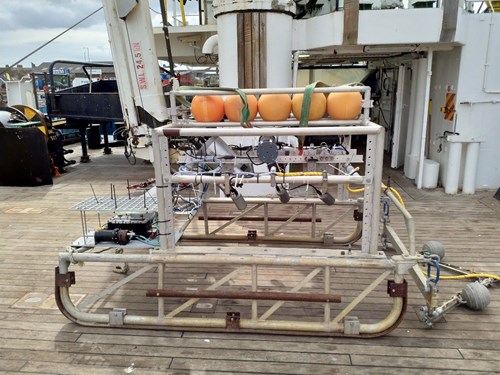 Sledge mounted camera ©JNCC. Towed across the seabed on sledge runners to collect stills and video imagery. Maintains a consistent field of view when towed over flat seabed, cannot be used over rocky or rugged seabed terrain 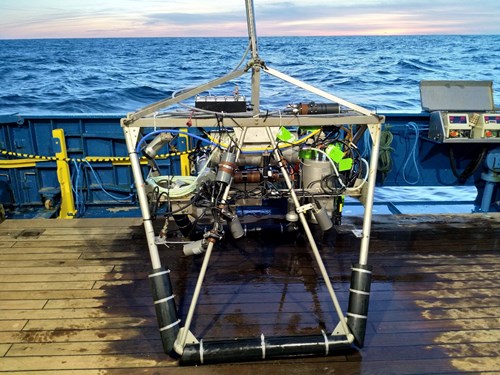 Drop frame mounted camera ©JNCC. Lowered to just above the seabed to collect stills and video imagery. Can be used over rocky or rugged seabed terrain, less consistent field of view due to changing altitude of camera 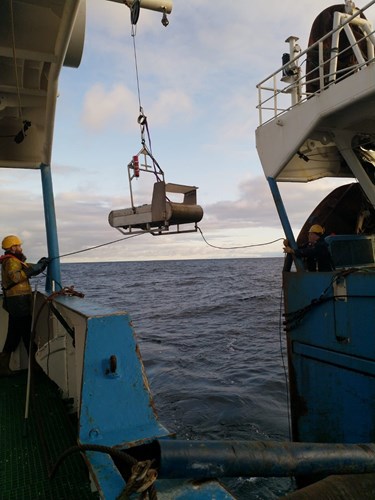 Chariot-mounted camera ©JNCC. Towed above the seabed at a relatively high speed (~3 knots) to collect video imagery. Can cover large areas quickly and can be deployed over flat and moderately rugged seabed terrain.

Piloted from the surface, ROVs can run transects or be used to investigate features of interest. Manipulator arms can be used to collect physical samples. Typically more expensive to operate than the towed systems above.

An ROV on deck of the RV Cefas Endeavour (left) during CEND1406 © Cefas 2006. An ROV system being deployed from the RRS James Cook (right) © Fionnuala McBreen/JNCC 2011.

Examples of imagery collected using this equipment is shown below:

In addition to the cameras, other equipment is mounted on the frame to improve the quality of the imagery data. This can include:

More information on underwater photography and video techniques used on survey can be found in the MESH Recommended Operating Guidelines and the NMBAQC Epibiota Remote Monitoring from Digital Imagery: Operational Guidelines.

Grabs are used to collect samples of sediment and marine species living beneath the surface of the seabed.

Once retrieved a sub-sample can be taken from the grab or core for particle size analysis, to inform us about the types of sediment present. The rest of the sample is sieved to retain the animals that live within (or on) the sediment. These samples are later sent to a laboratory for identification.

Wet sieving of a sample collected with a grab (left) © JNCC, 2012. Life on a cobble, collected in a grab sample during CEND0513 (middle) © Eleonora Manca/JNCC 2013. Specimens of each species collected are retained in a taxonomic reference collection following analysis. Sampling of sponge spicules (right) © Mike Nelson/JNCC 2013.

Examples of the grabs and cores which have been used on JNCC surveys are shown below. 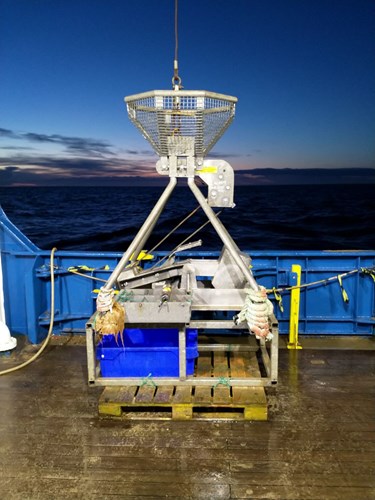 Hamon grab. Used to sample a large range of sediments from mud to coarse sediment.

Cefas mini-Hamon grab (left), this particular one, used on the Cefas Endeavour, is equipped with a camera to collect a picture of the undisturbed seafloor before the sample is collected (image © Neil Golding/JNCC 2012). Day grab (middle) and Van Veen grab (right) (images ©Cefas 2014).

More information on box coring is reported in the MESH Recommended Operating Guidelines for Box Coring.

Scientific trawls are used to sample macro organisms living on or near the seabed and are towed behind the vessel. 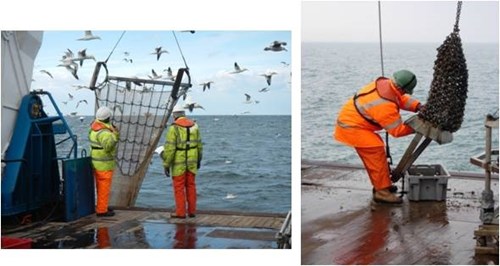 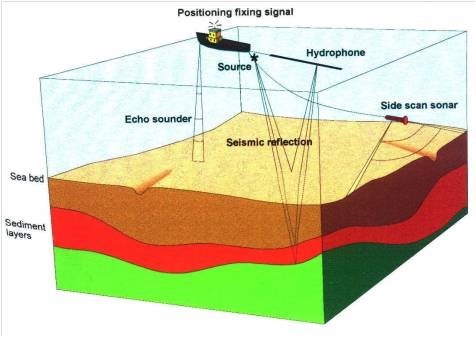 Multibeam echosounders (MBES) provide detailed information on water depth and seabed morphology (form and structure) by focusing pulses of acoustic energy directly beneath the ship’s hull in a fan-shaped coverage of the seabed. Transducers then record the strength, direction and elapsed time of the acoustic reflection from the seabed and these digital signals are decoded to determine seabed depths (bathymetry) and features from a wide area under the survey vessel.

Technical information on MBES systems, calibration and data quality control can be found in the recommended operating guidelines for swath bathymetry surveys, in the MESH web pages.

Multibeam depth profile and 3D view of the largest pockmark within the Scanner Pockmark SAC/SCI boundary during CEND19x12 © JNCC/Cefas 2012. Drumlin features visible in a hillshade output from a multibeam echosounder in the northeast corner of North St Georges Channel rMCZ during CEND0513 © JNCC/Cefas 2013.

Like MBES, side scan sonar also uses acoustic signals to detect underwater objects and features. The angle at which the acoustic beams are transmitted results in distinctive ‘shadows’ being cast behind objects and features, helping JNCC scientists build a picture of what the seabed looks like. The strength of the returned acoustic signal varies with the characteristics of the seabed being surveyed, which helps differentiate between hard and soft sediments. To collect these data, a torpedo-shaped 'towfish' containing the sensors is towed behind the survey vessel. Signals are transmitted via the tow cable to a ship-based processing unit where the acoustic data are interpreted.

These MESH Side scan sonar guidelines contain detailed information on calibration, deployment, operation and data quality checks that we use in our side scan sonar surveys. 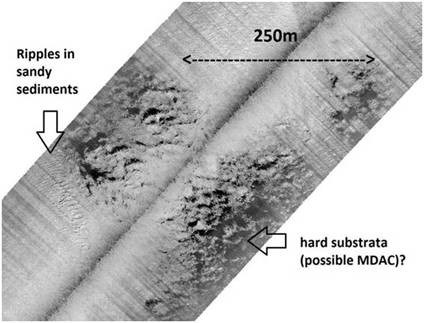 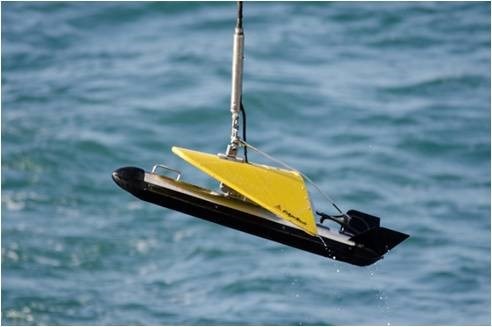 These instruments are generally towed behind the vessel and are used for the collection of information on the shallow geology and sedimentary structure of the seabed. Like side scan sonar and MBES they emit an acoustic wave, however the frequency used is low and the wave is able to penetrate the seabed and reveal shallow reflecting layers within the seabed.

To find out how one of our recent surveys to the Croker Carbonate Slabs collected data using a type of sub-bottom profiler known as a ‘boomer’, please see their 'To boom or not to boom' blog post. 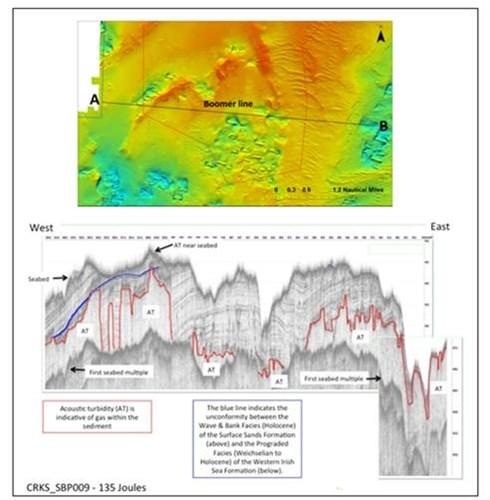