The Keeping Rivers Cool project is a nationwide initiative. It aims to increase the resilience of sensitive ecosystems and freshwater wildlife to the impacts of climate-change-induced temperature increases by using shading to cool rivers. 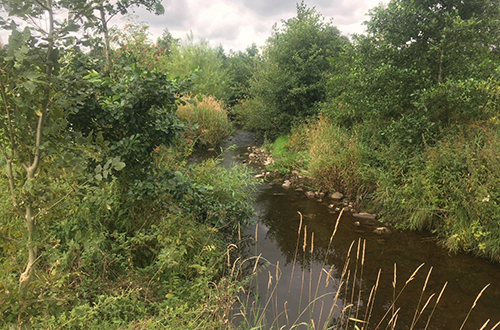 Over time it is predicted that river temperatures will rise due to the impacts of climate change which could have a catastrophic impact on watercourses and the organisms that inhabit them.

Keeping Rivers Cool (KRC) is an initiative created by the Environment Agency to address these risks. The project uses trees to shade small streams and reduce temperatures, so that trout and salmon can survive increasingly hot summer days and mitigate against the risks posed by warmer water temperatures. 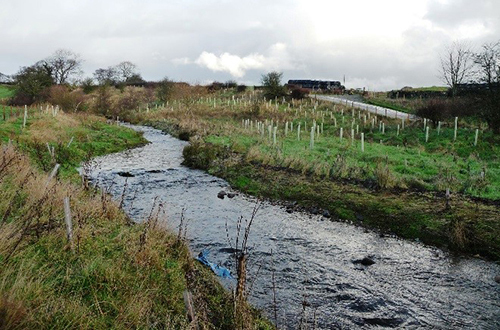 The Keeping Rivers Cool programme began in 2012 with the focus initially given to sites in the Ribble, Hampshire Avon, Wye, and the Tyne river catchments.

The project’s aim was to help this promote the simple idea that riparian shade would keep rivers, and the salmon and trout within them, cool. This would be done by producing targeting maps, guidance and demonstration projects; and using those to promote the success to others who might then start-up projects of their own.

Riparian shade on watercourses has been shown to lower river temperatures as a climate change adaptation measure. Shade from trees can reduce temperatures in small rivers on average by 2–4ºC (compared to unshaded streams), but demonstration sites in the Ribble catchment revealed shaded sites can be over 6°C cooler on hot days.

In the initial demonstration projects delivered between 2012–2016, there were 55,000 trees planted and 37 km of fencing erected. Since the programme began there have been over 300,000 riparian trees planted by the Environment Agency, Rivers Trusts and Wildlife Trusts.

Keeping Rivers Cool provides practical support to encourage landowners and conservation managers to increase riparian shading in upland streams where it is most required, by providing:

The initial project has stimulated wider delivery nationally and the data products continue to be used to guide deliver of riparian shade.

Keeping Rivers Cool delivers both climate change adaptation and mitigation due to the carbon sequestration benefits associated with mixed broad leaf tree planting. It can deliver multiple other benefits including improving river habitat for people and wildlife, and intercepting sediment and pollution.