JNCC has been at the forefront of the development of indicators providing an expert lead role, working collaboratively both at the national and international level. The following table highlights some of the marine biodiversity indicators which JNCC has had the greatest involvement with and that have been used for reporting on the implementation of the UK Marine Strategy, the Convention for the Protection of the Marine Environment of the North-East Atlantic (OSPAR), and other international and national requirements such as the Convention of Biological Diversity, Bern Convention, the Marine Acts.

Outputs of these indicators were used for the 2012 Initial MSFD Assessment, the 2017 OSPAR Intermediate Assessment and in the UK Marine Strategy Part 1: UK Updated Assessment and Good Environmental Status, published in 2019. JNCC is currently leading on a project aimed to compare and integrate the outputs of different biodiversity indicators with the aim to improve assessment of benthic ecosystems. 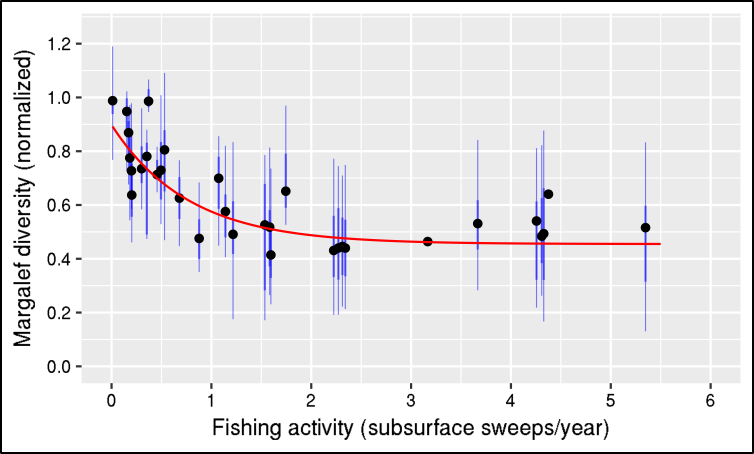 The aim of this indicator is to detect and quantify the impact of a pressure by looking at the deviation of values of a Multimetric index (MMI) compared to a baseline condition (defined as undisturbed or least disturbed), per habitat type. Each MMI is obtained from the optimisation of an umbrella of biodiversity indices, therefore, adapted to assess the condition of habitat types to specific pressures. 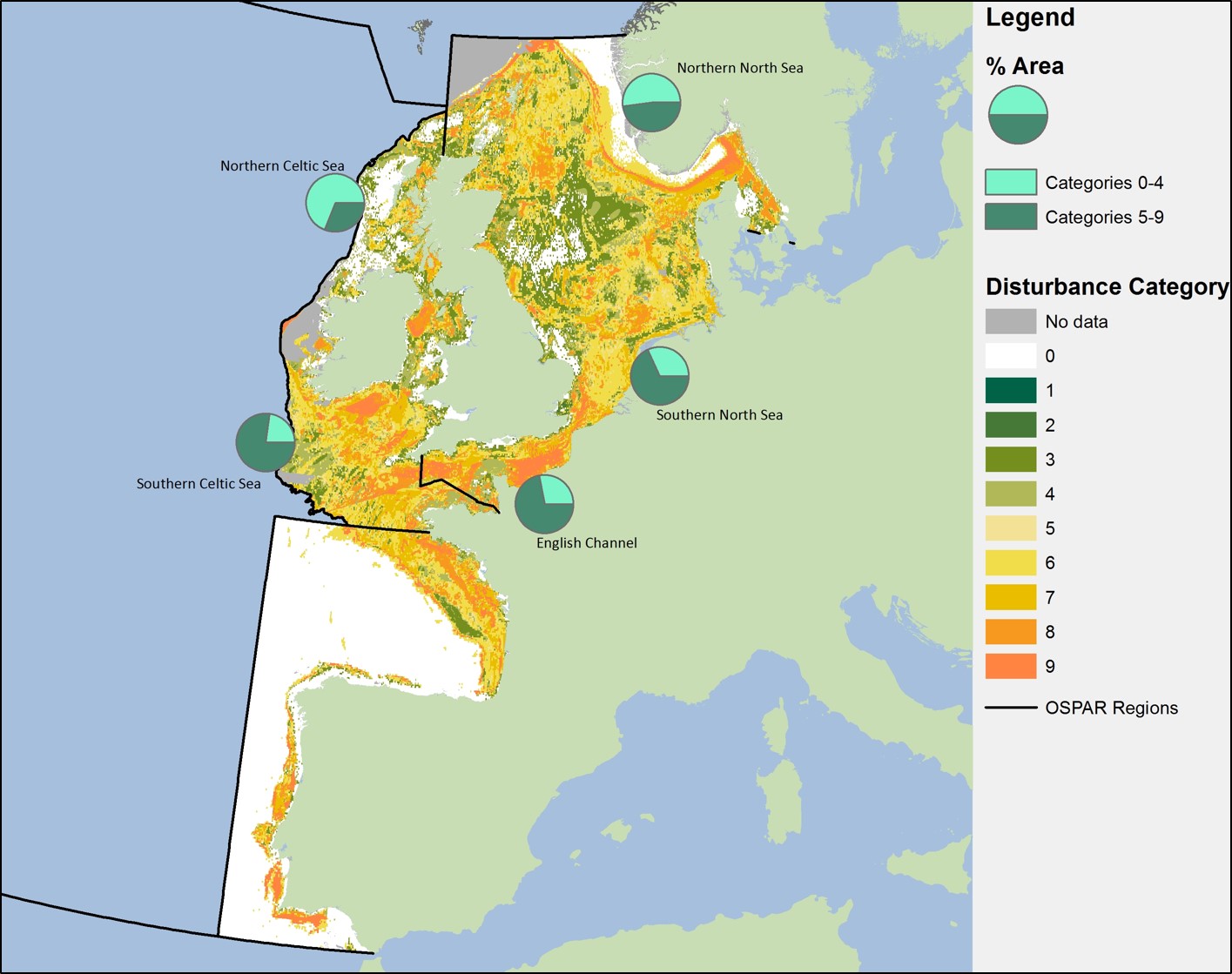 The aim of this indicator is to calculate the extent and intensity of potential damage to a given seafloor habitat. The indicator uses and combines two types of information to produce a map of habitat disturbance: the distribution and sensitivity of habitats (resilience and resistance); and the distribution and intensity of human activities and pressures that cause physical damage 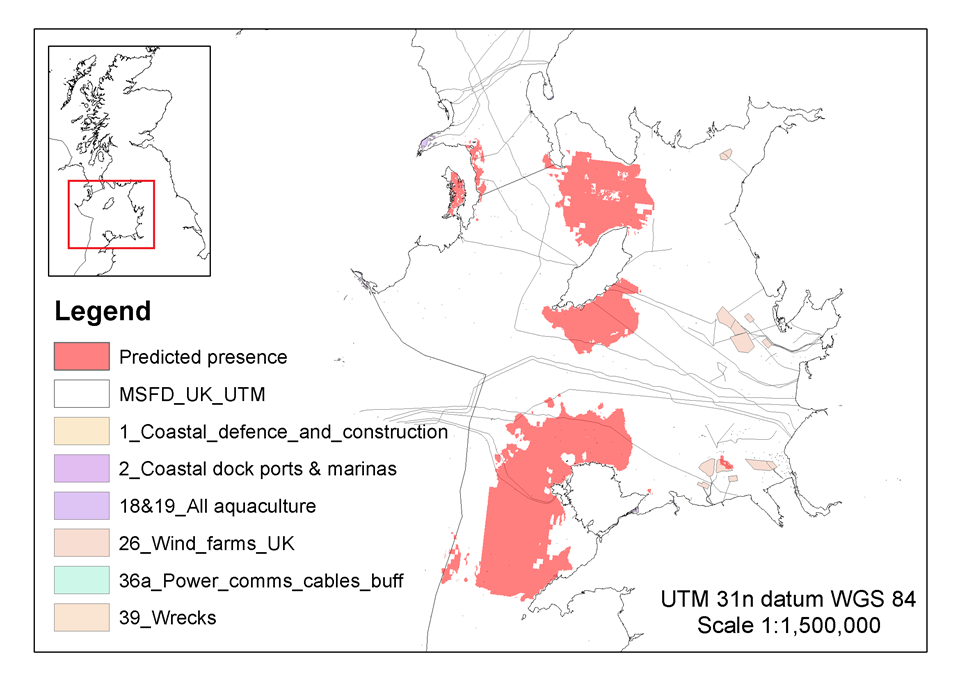 The aim of this indicator is to estimate the amount of habitat that has potentially been lost due to human activity. The indicator uses the overlap between the predicted distribution of habitats (horse mussel reefs and seagrass beds) and human activities most likely to cause physical loss. This indicator is a quantitative measure of the status of intertidal rocky communities in relation to composition of cold- and warm-water species and variations of temperature patters across geographical scales and over time. This information is essential to understand how anthropogenic pressure exacerbates effects from climate change 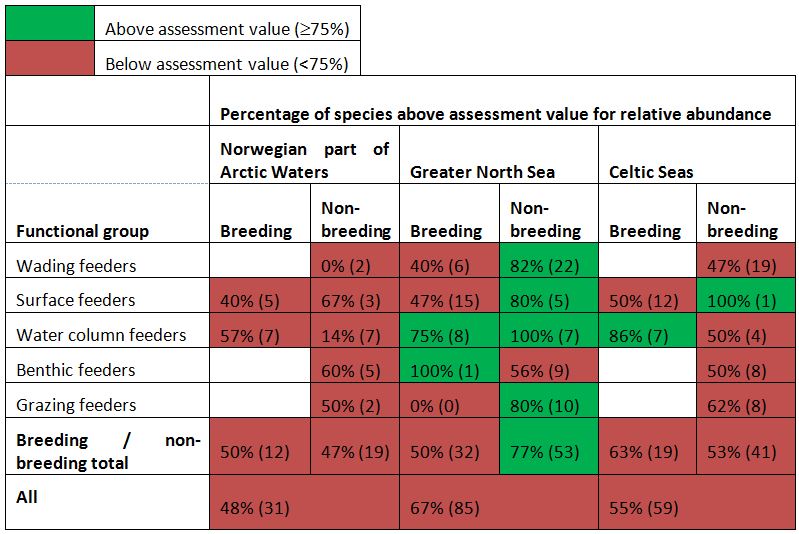 The indicator looks at temporal trends of ‘relative breeding abundance’ or ‘relative non-breeding abundance’ of marine bird species. Relative abundance is the number of adult birds or breeding pairs estimated each year as a proportion of a baseline. Rapid changes in number can indicate human-induced impacts and, supported by species-specific assessment values for the extent of decline, can serve as a prompt for management action. 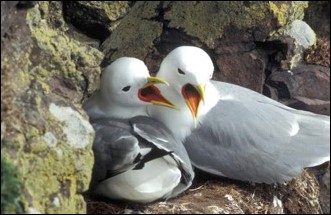 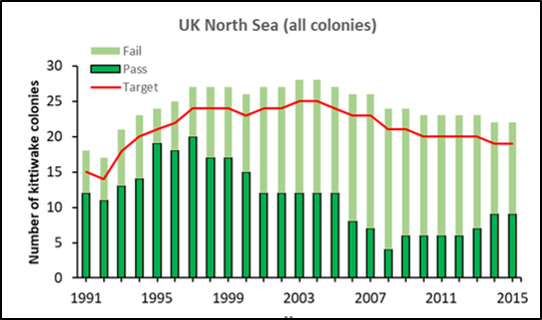 This indicator looks at the annual breeding success of kittiwakes (number of chicks fledged per pair) and plots this against sea-surface temperature. A mathematical model is used to predict breeding success under expected prevailing climatic conditions. If kittiwake breeding success were significantly lower than predicted this may indicate other impacts – possibly anthropogenic. 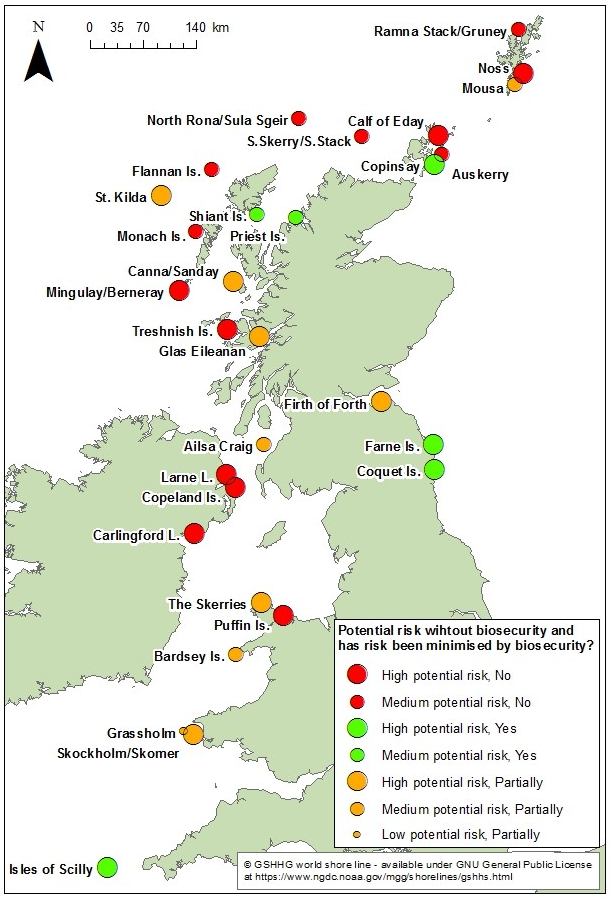 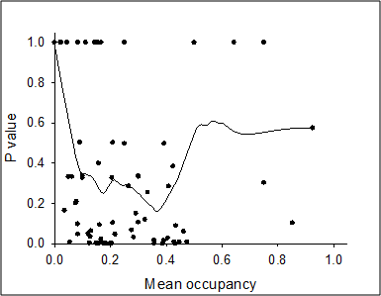 This indicator examines changes in the distribution of waders and waterfowl. It looks at data on the presence or absence of species within a pre-defined grid of 2km x 2km survey squares.

This indicator looks at trends in distribution and abundance of coastal bottle-nose dolphin (Tursiops truncatus) to assess the state of the population since the start of monitoring. Trends are defined as stable, declining (decreasing ≥5% over ten years) increasing (increasing ≥5% over ten years) or unknown. This percentage (i.e. 5%) is derived from the International Union for the Conservation of Nature (IUCN) criterion to detect a 30% decline over three generations for a species, which equates to slightly less than 0.5% per year for Odontocetes.

Abundance and distribution of cetaceans other than coastal bottle-nose dolphins 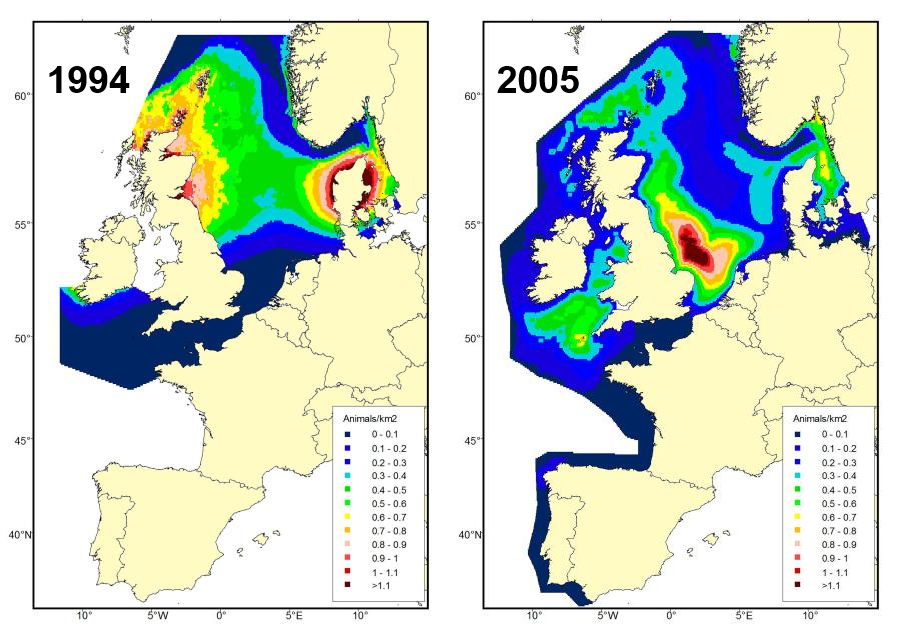 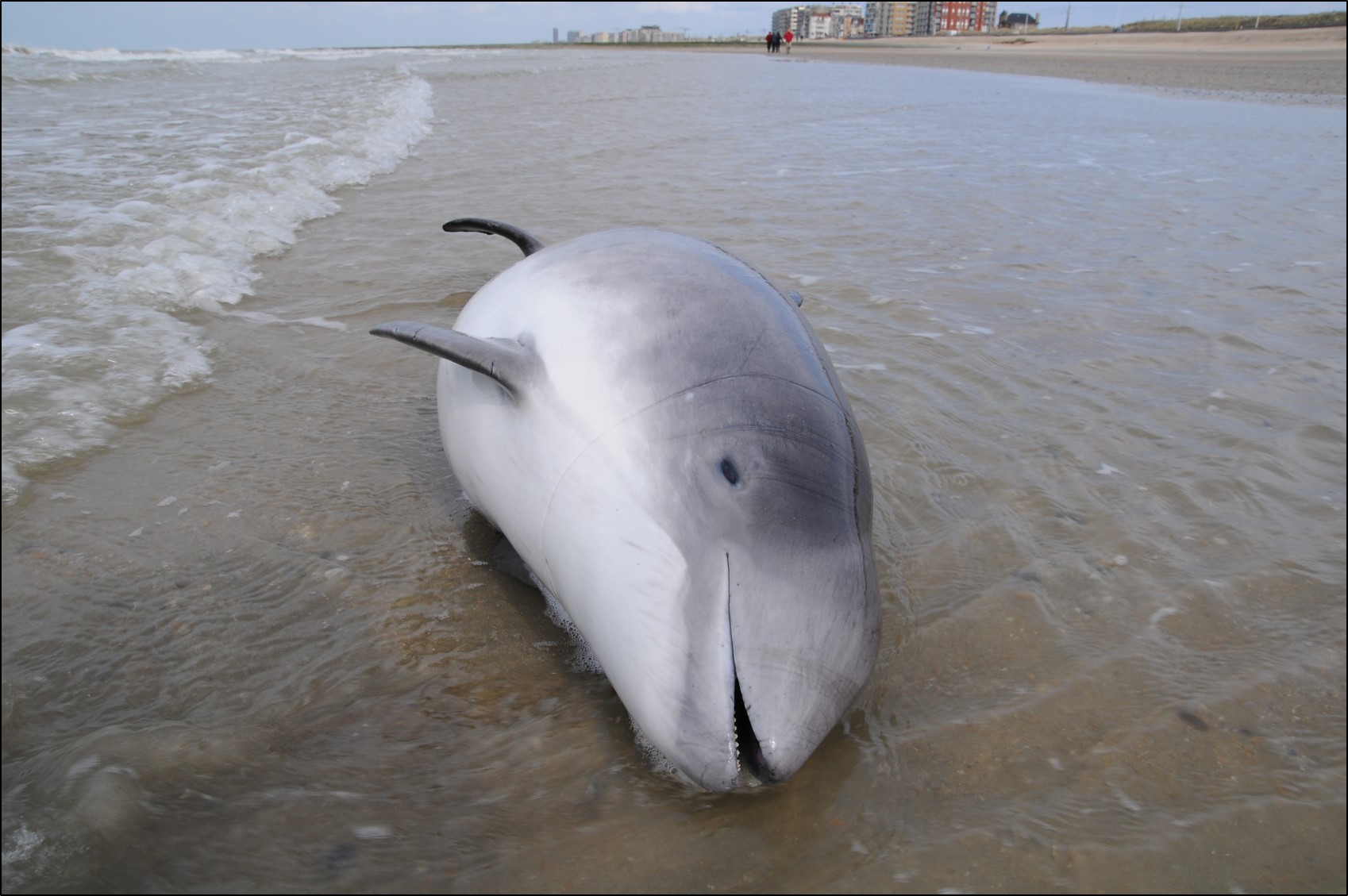 Left: Dead harbour porpoise with net marks from being caught in a fishing net (courtesy of Jan Haelters)

This indicator uses a Bycatch Risk Assessment approach (that considers fishing effort and bycatch rate) to estimate the total annual bycatch of the harbour porpoise (Phocoena phocoena) in a region.

Changes in the abundance and distribution of seals 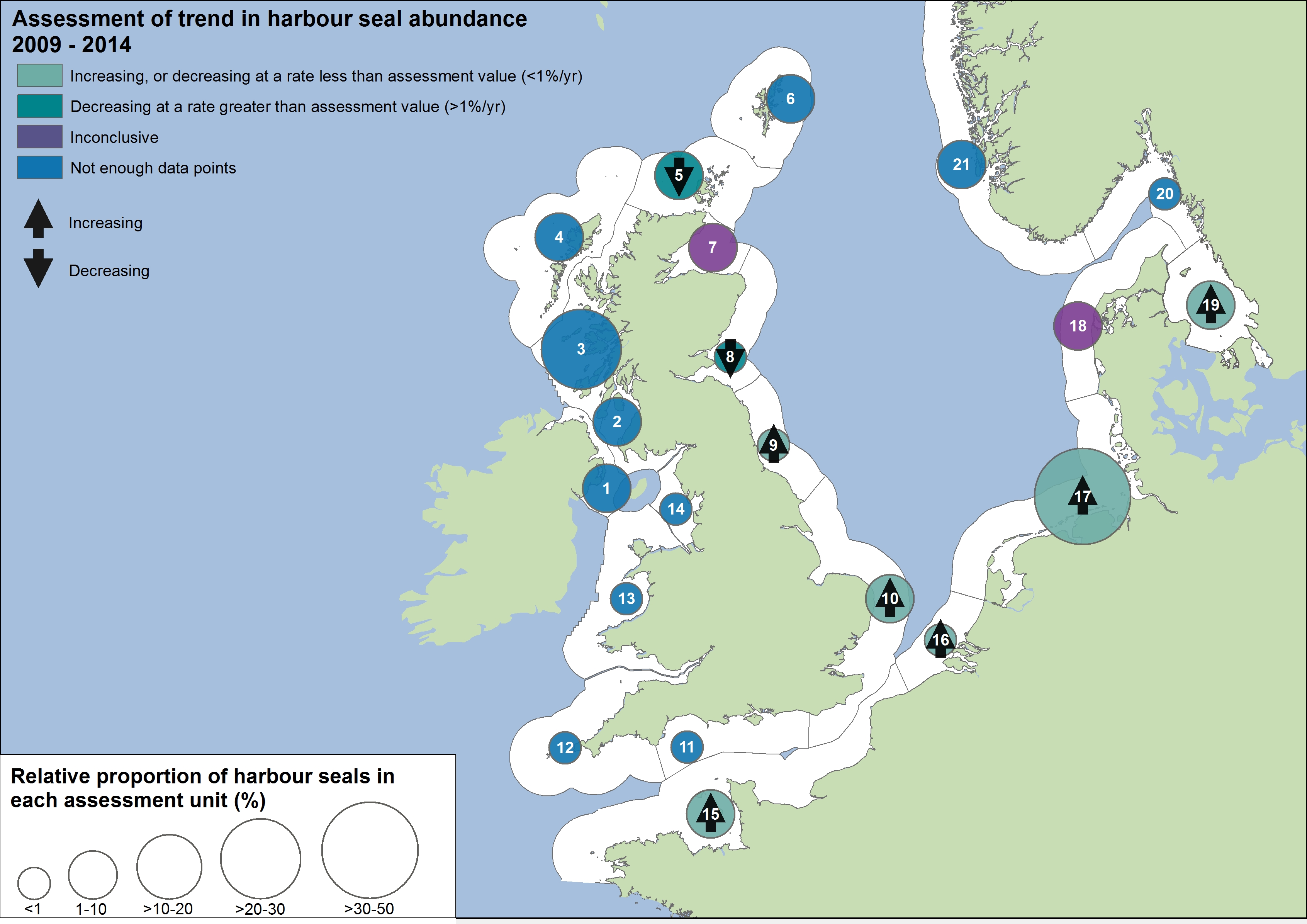 This indicator uses estimates of seal numbers from monitoring programmes that count seals on land when they are moulting or breeding. Assessment was done for the Atlantic grey seal (Halichoerus grypus) and the harbour seal (Phoca vitulina). The aim of this indicator is to determine if populations of both species are in a healthy state, with no long-term decrease in population size, beyond natural variability. 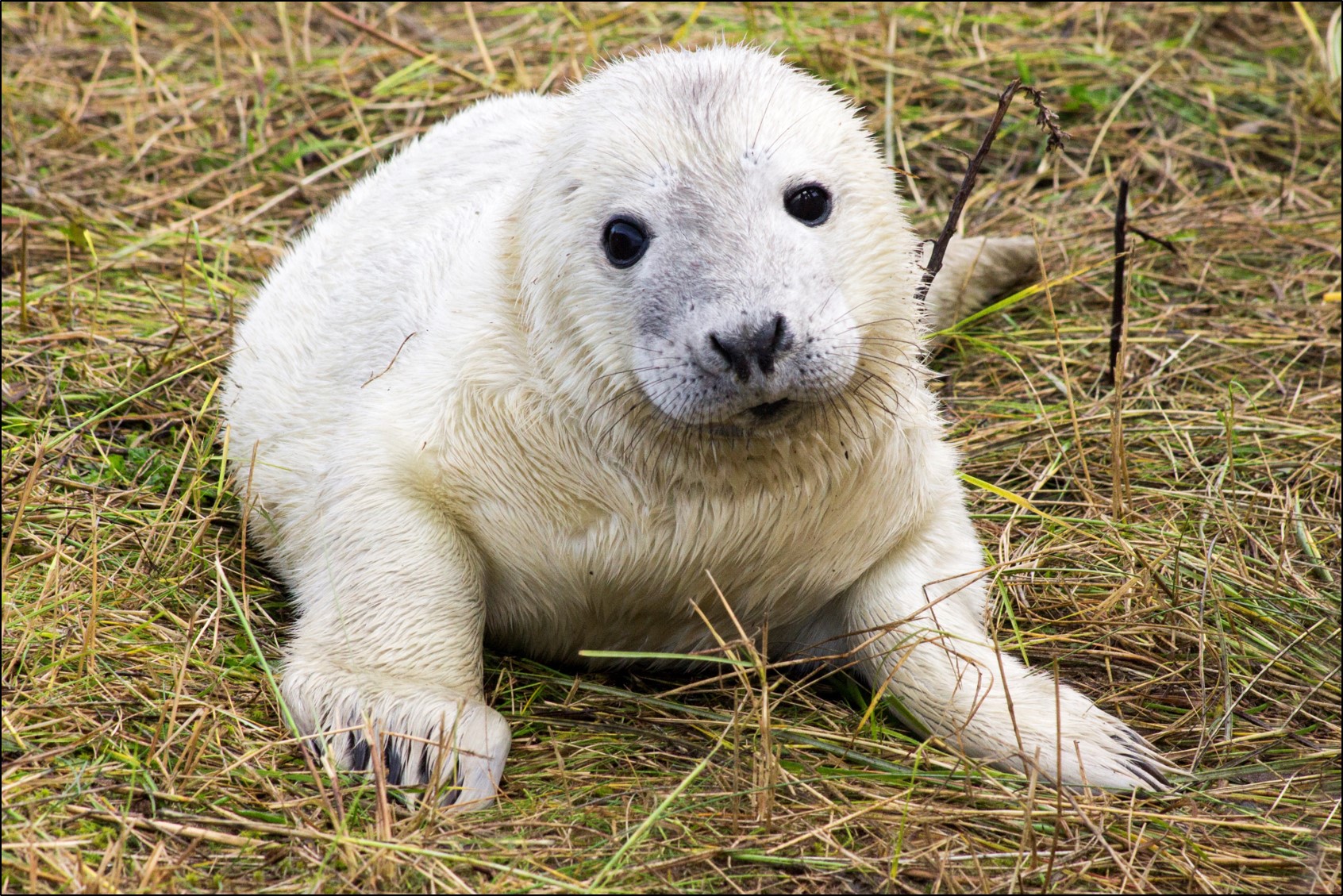 This indicator assesses trends in the number of grey seal pups born at breeding sites in the Greater North Sea and in the United Kingdom part of the Celtic Seas. Grey seals gather to breed at long-established colonies located on islands, sand banks and mainland coastlines around Europe.