Scheme to reduce disturbance to waterfowl during severe winter weather

For information on Voluntary Restraints, visit the BASC website

What is the scheme?

This scheme (which runs from 7 November to 20 February) is designed to help with conservation of waterfowl – ducks, geese, and waders – by reducing disturbance to them during periods of prolonged cold weather. Shooting organisations co-operate closely with voluntary and statutory nature conservation organisations to minimise disturbance to birds during such severe weather. The season for waterfowl shooting inland closes on 1 February and for foreshore shooting it closes on 21 February. However, the relevant Secretary of State(s) has power to impose a temporary close season of waterfowl shooting during 'severe weather' (Wildlife and Countryside Act Section 2). This scheme provides an agreed process as to what qualifies as 'severe weather'. In addition to providing criteria for a statutory suspension of shooting, criteria have been agreed for periods of less-prolonged severe weather, where voluntary restraint of shooting will be encouraged where appropriate. Other sources of disturbance in cold weather should also be reduced, and bird watchers, bird ringers, walkers, dog-walkers, horse-riders and water-based sports, in particular, should avoid disturbing groups of feeding or resting birds

Why is it needed?

For many species of bird, and especially for waterfowl, mid-winter can be an ecological "bottle-neck" when they have difficulty obtaining enough food, particularly in severe cold weather when the ground becomes frozen. They face reduced prospects for survival during such times. In addition, many waterfowl will have flown to Britain to escape from even colder conditions in continental Europe. Lengthy spells of cold weather result in many birds showing changed behaviour. They become "tame" and reluctant to fly when approached in order to avoid using up their remaining energy reserves. In these circumstances, it is important to reduce any disturbance, such as that caused by waterfowl shooting, because when the birds cease feeding and fly around, they use up their limited energy reserves more quickly. When several periods of severe weather occur within a short time scale, voluntary restraints play a particularly important role because it allows populations to recover from stress.

What does this mean for waterfowl shooters?

The following guidelines have been agreed among the statutory country nature conservation bodies, government departments and non-governmental organisations, including BASC, RSPB and WWT. In this scheme, England and Wales are dealt with as a single ecological management unit, separately from Scotland. The reason for this is because within Great Britain, birds tend to move westwards (as well as south) with the Welsh coast often receiving birds displaced from the frozen eastern coast of England. It is therefore logical to consider Wales and England as a single management unit.

The Met Office records temperature data at a network of 25 meteorological stations throughout England, Scotland and Wales on a daily basis (Table 1 and map). These stations are chosen to reflect broadly the weather conditions around the coast and are often close to major estuaries and centres of foreshore shooting.

Table 1: Primary and secondary weather stations for Scotland and England/Wales

NB. From time-to-time sites open and close, and the Met Office will undertake reasonable endeavours during the service to retain continuity of service. 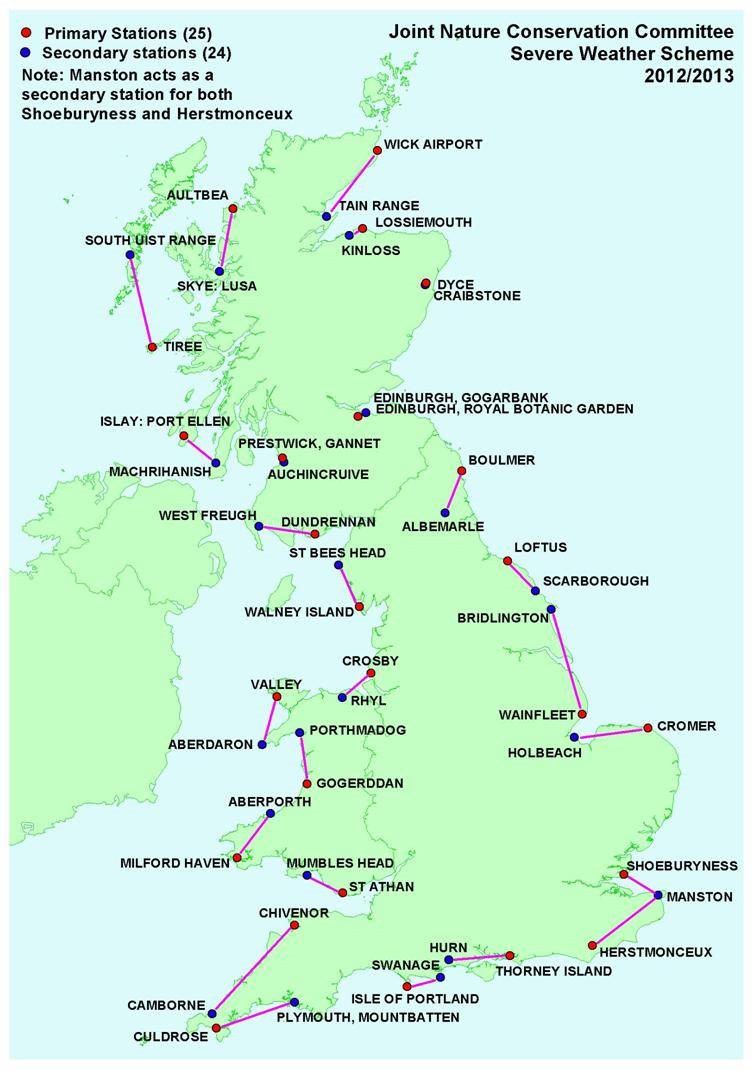 When more than half of these meteorological stations (in Scotland and/or England/Wales) have recorded frozen conditions (determined from minimum air and grass temperatures) for seven consecutive days (but allowing short periods of thaw), the country nature conservation bodies liaise with BASC, who normally advise a period of voluntary restraint of shooting where appropriate whilst severe weather conditions last.

On the 13th day of frozen conditions, if more than half the relevant meteorological stations are still frozen, a case is presented to the relevant Secretary of State(s) requesting a suspension on waterfowl shooting due to the severe weather. Such suspensions can be instituted in Scotland alone, and/or in England/Wales dependent on the extent of the cold weather. Once the Statutory Instrument has been signed, it comes into force at 00h01, two days after the case was presented.

Calls for voluntary restraint of waterfowl shooting will be publicised by the British Association of Shooting and Conservation (BASC) and the relevant country-based statutory nature conservation organisations. Other organisations who are party to the scheme may also publicise such events. In addition, BASC will email all its wildfowling clubs and shooting syndicates calling for voluntary restraint in waterbird shooting in those parts of the country where necessary (and warning of the possibility of a statutory suspension if conditions persist).

Once a case has been presented to the Secretary of State(s) advising of a statutory suspension of waterfowl shooting, the impending suspension will be publicised widely. BASC will inform all its wildfowling club secretaries, Joint Councils and game shooting syndicates, and it will institute a 24-hour telephone information service in all regions of the country. Defra, Scottish Government, Welsh Government, JNCC and relevant country-based statutory nature conservation organisations will publicise statutory suspensions on their websites. Other organisations who are party to the scheme are likely to do the same. In accordance with Section 26(5) of the Act, when the suspension affects England and Wales an advertisement is placed in the London Gazette.

How long does the suspension last?

Any lifting of the suspension before the full 14 days will take into consideration the need for a period of recovery for waterbirds after the end of the severe weather itself. In this event, DEFRA, Welsh Government and/or Scottish Government undertake publicity campaigns as extensively as possible to inform the shooting community of the fact.

There can be an extension of the statutory suspension beyond 14 days, through the signing of a second Statutory Instrument, if there is still severe weather and no improvement in weather conditions is forecast. The management of the second period of suspension is undertaken in the same manner as the first. Information on the condition of waterfowl should continue to be reported through completion of the bird condition form to aid review.

The role of conservation staff

Country nature conservation body contacts (see principle organisational contacts below) are responsible for agreeing with BASC if a period of voluntary restraint is required once the seventh day of severe weather is reached. The country nature conservation body contacts should also liaise with their respective government, and, in the event of an imminent statutory suspension, have the responsibility to provide them with formal advice to implement the statutory suspension.

A network of representatives from the country nature conservation bodies, shooting and game keeping associations and various conservation organisations are alerted by the Met Office of periods of severe weather. It is their responsibility to disseminate this information to their regional staff, shooting clubs and syndicates and other users of waterfowl habitat, to encourage them to minimise disturbance to birds and to provide feedback on local conditions by completing the bird condition forms available to download on this website. They should pay particular attention not only to the foreshore and freezing of inland waters and feeding grounds, but also to the condition of birds, bird numbers and movements, appearance of unusual species, significance of wind chill and to snow cover.

An important role of conservation staff is the publicising and encouraging of compliance with any call for voluntary restraint, or statutory suspension. In addition it is very important for them to encourage reduction of other forms of disturbance, for example bird watching, bird ringing, walking, dog-walking, horse-riding and water-based sports. Conservation staff should raise awareness of this where possible, and consider altering access routes in particularly vulnerable areas.

A review of the historical background to the current system of cold weather shooting bans was published in 1992 in Statutory Suspension of Wildfowling in Severe Weather, Review of past winter weather and actions (JNCC Report No. 75). This gives detailed information on the operation and efficiency of the scheme in previous winters.

If you have any further queries regarding these waterfowl shooting suspensions, please contact either the relevant country nature conservation body contact or JNCC (see table below).