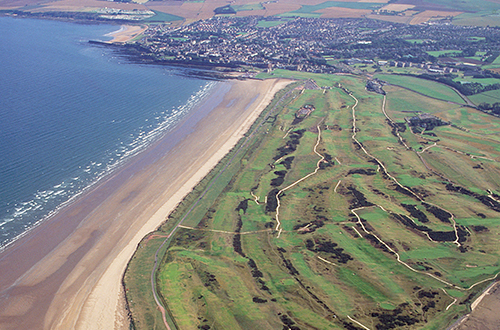 The West Sands beach at St Andrews is part of a stretch of natural, undefended coastline in north-east Scotland. The beach area is backed by a large expanse of sand dunes which provide natural protection from high tides and rising sea-levels to the amenities, farmland and recreational assets beyond them.

The dunes are part of the Eden Estuary Site of Special Scientific Interest (SSSI) and the Firth of Tay and Eden Estuary Special Area of Conservation (SAC).

In March 2010, the dunes were hit by a storm surge and high tides, breaching parts of the dune system and flooding farmland and parts of the world-renowned St Andrews golf courses.

The West Sands Partnership (made up of relevant organisations and interest group), formed in the same year, has delivered nature-based enhancement of the dunes to manage the risks of coastal erosion and flooding. 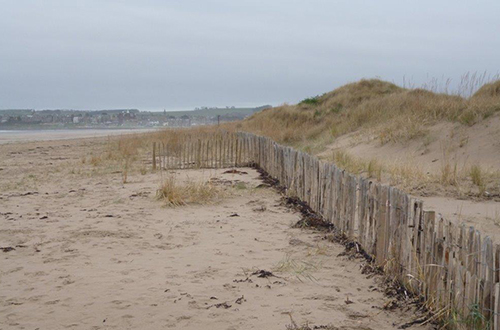 Large-scale dune restoration began in 2010. The project uses a highly sustainable Building with Nature approach – the ‘recycling’ of natural sand transport – to address the twin challenges of coastal flooding and erosion risk on a coastline with very high asset value and recreational value.

It works with coastal habitats to provide adaptation to extreme weather and sea-level rise, with the inherent adaptiveness of sand dunes as a natural coastal defence forming the heart of the project. Tens of thousands of tonnes of sand was used to re-profile parts of the dunes, re-instating their flood protection function.

This solution was designed to be as self-sustaining as possible, though in the heavily-used dune system it was also necessary to manage pedestrian access, and to stabilise some blown sand by installing fencing and planting dune grasses.

All work had to be compatible with conservation of the dunes and intertidal areas, which are designated as Site of Special Scientific Interest (SSSI) and a Special Area of Conservation. 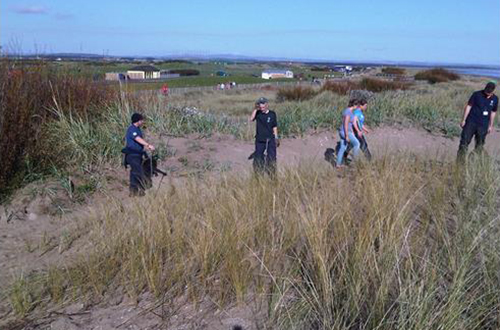 The dune ridge is providing more resilient natural protection from coastal flooding and erosion. This stems largely from reduced potential for breaching by waves and strong winds.

It is also supported by reduced pressures on coastal habitats managed by:

The dune habitats notified within the SSSI were deemed to be in a ‘recovering’ condition in NatureScot’s formal site condition monitoring in 2016. This is partly attributed to the dune restoration project.

Monitoring carried out by Fife Coast and Countryside Trust (FCCT) has shown that since mechanical beach cleaning stopped Ringed Plovers have been breeding successfully at Outhead for the first time since 2005.

A key element for the success of this project has been the understanding between all partners that this restorative work is likely to be required for many years if not indefinitely. As such the project partners have accepted that dune restoration is part of the site management in the mid- to longer-term.