Finding solutions to tackle climate change is a key priority for the UK and international community. One emerging area of focus is ‘nature-based solutions’; utilising our knowledge of ecosystems and the services they provide to increase resilience to the impacts of climate change. Nature-based solutions have a crucial role to play in taking action on climate adaptation, resilience, mitigation and biodiversity loss.

These ‘nature-based solutions’ include services offered by marine habitats and species as part of their normal functioning; for example, the absorption of carbon dioxide from the atmosphere. It is now widely understood that marine ecosystems such as coastal saltmarshes and seagrass beds are some of the most efficient habitats on earth by area for sequestering and storing carbon.

JNCC has been commissioned by Defra to develop the evidence base around climate smart decision making in Marine Protected Areas (MPAs). The first phase of this work was a project analysing the role of MPAs and their protected features in mitigating the impacts of climate change (e.g. through the sequestration of carbon). 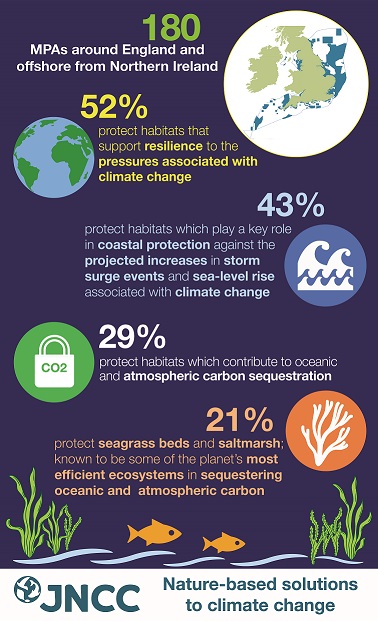 Working collaboratively with the Marine Biological Association (MBA), the project also assessed the sensitivity of MPA features themselves to the projected impacts associated with a changing climate. The project report is available on the Defra Science website and on JNCC's Resource Hub. This is supported by climate profile report cards for two study MPAs (Studland Bay and The Canyons).

Initial project outputs were presented at the United Nations Framework Convention on Climate Change (UNFCCC) COP (Conference of Parties) in Madrid in December 2019, showcasing the UK’s work on the designation of MPAs and their role in mitigating the impacts of climate change.

JNCC will continue to build on the platform of evidence already generated from our work on MPAs and climate change in a collaborative way to ensure a solid evidence base is built and maintained to ensure robust decision-making into the future.

In the run up to the UNFCCC COP to be held in Glasgow in 2021, JNCC and Defra are working collaboratively with other country experts; including Costa Rica, Chile, the USA and France to best ensure the evidence base required to support decision making around a global problem is further developed in a consistent and streamlined way.