Trade is becoming increasingly global. With this, supply chains and their associated impacts on the natural environment are becoming harder to trace. Set against a background of rising global consumption, the need to quantify and understand these impacts is becoming ever-more important.

Governments, businesses and consumers are recognising this growing need to understand and improve the sustainability of their produce, to ensure supply chain resilience and to inform decisions on optimal sourcing patterns that minimise environmental impact.

JNCC's work has involved development of tools and techniques to evaluate how the environmental impacts of trade and consumption can be assessed and mitigated.

Assessing the impacts of a supply chain relies on quantifying and understanding the relationships between three main questions: 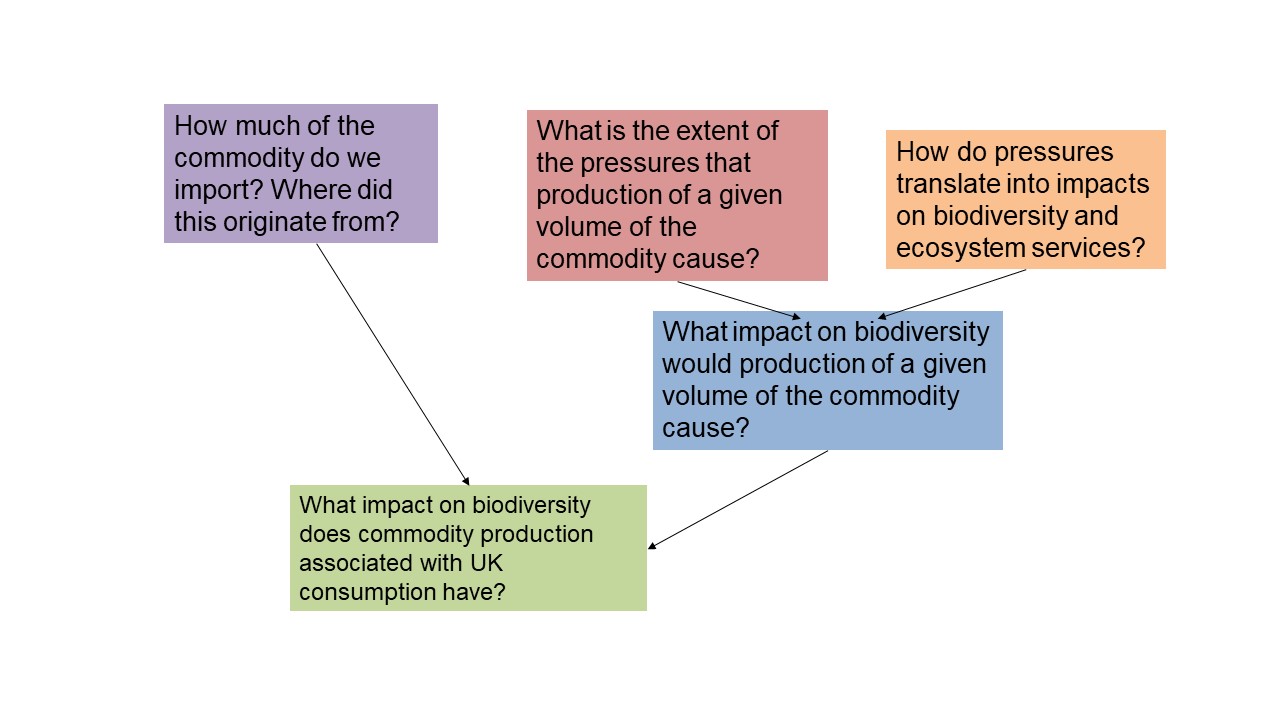 Earth observation is a novel technology that is being increasingly used for a wide variety of applications. This is providing data at a global scale to a level of detail that would have previously been impossible. It can be used to map habitats and quantify environmental change, including many of the pressures caused by commodity production, such as land-use change and water stress. This could highlight areas in which to focus investigations on the ground.

This highly topical area has many potential applications and the possibility to make a real-world difference:

JNCC has a long history of work within this area, through a number of projects, including:

Work is being carried out on the development of an indicator of the global environmental impacts of UK consumption. Outputs from proof of concept studies exploring two potential approaches (of which one was recommended to be taken forward) can be found on the Defra Science and Research Projects portal. Further information and outputs will be available following completion.

An entry-level guide to the area of sustainable production and consumption was produced, based on knowledge acquired from a review of over 250 initiatives aiming to link consumption to environmental impact.

In March/April 2020, a time-limited study was undertaken scoping out whether reliable figures are available on the percentage of global GHG emissions that would be reduced per year if the UK, Europe or the world shifted towards consumption of palm oil, beef and soy that did not lead to conversion of natural habitats during production.

Assessing physical trade flows of materials of biological origin to and from Scotland (JNCC Report No. 533, October 2014)

In 2014, a joint study involving the JNCC and SNH (Scottish Natural Heritage) investigated this further, within the narrower context of Scottish consumption. It used extended multi-regional input-output modelling to map global supply chains and estimate localised environmental pressures associated with Scottish biomass consumption of a short-list of commodities. This was the first biomass Material Flow Account (MFA) for Scottish biomass, production, imports and exports.

The global land use impact of the United Kingdom’s biomass consumption Part I: Biomass flows through the UK economy – an overview of biomass sources and overseas land requirements (JNCC Report No. 452, May 2011)

A JNCC study in 2011 investigated biomass flows through the UK economy and the impact this had on overseas land. It looked into material flows through the UK economy and compared biomass produced within the UK with biomass imported to the UK. The report concluded that approximately 14 million hectares of overseas land was required to produce the 52 million tonnes of biomass imported in 2008.

The Global Biodiversity Database project was JNCC’s first piece of work on sustainable global supply chains, undertaken in 2006 and 2007 by Scott Wilson. The aim of this project was to develop a method to link biodiversity ecoregions to cultivated areas of commodity production (of commodities that are consumed by the UK) and to monetary input from 'UK plc'. This included several case studies, which applied the method to specific key commodities and regions (Brazil and Soya; Brazil and Lumber; Columbia and Palm Oil; India and Cotton; India and Shrimps; Indonesia, Malaysia and Palm Oil; Russia and Lumber; and South Africa and Wine).