The Irish Sea SPA lies in the Irish Sea, about 35 km south-west of the Isle of Man and 36 km to the north-west of Anglesey. The site has the third largest marine aggregation of breeding Manx shearwaters identified in the UK.

Located in the Irish Sea, about 35 km south-west of the Isle of Man and 36 km to the north-west of Anglesey, the Irish Sea SPA is known to regularly support a population of European importance for Manx shearwater (Puffinus puffinus), which are likely to use the area as a foraging location during the breeding season.

The Irish Sea Front SPA is the third largest marine aggregation of breeding Manx shearwaters identified in the UK (Kober et al., 2012). Data from the extensive European Seabirds at Sea (ESAS) database suggest that more than 12,000 Manx Shearwater could be present in the area. Tracking studies indicate that Manx shearwaters from at least three different colonies around the Irish Sea (Northern Ireland, Wales and Devon) are likely to use the Irish Sea Front SPA for foraging during the breeding season.

This site is located over part of a large tidal front which forms in the spring every year. This tidal front creates an area of very productive sea, with high concentrations of zooplankton leading to large numbers of prey species contributing to the sites importance. 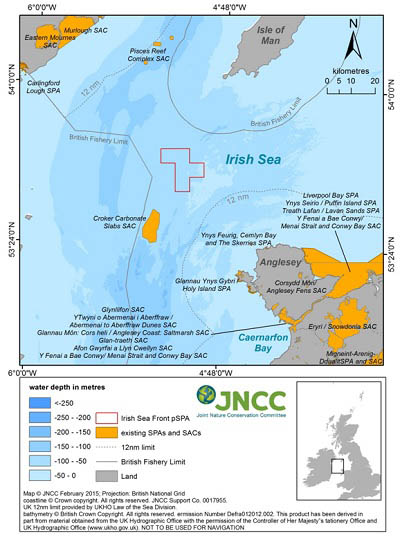 The Irish Sea Front marine Special Protection Area was classified by the UK Government to meet obligations set out in the Birds Directive (2009/147/EC). The Directive provides a framework for the conservation and management of, and human interactions with, wild birds in Europe.

The documents referred to below are specific to the Irish Sea Front SPA and form JNCC’s advice and evidence package.

Information about the general UK SPA site selection process is available on JNCC's SPA webpages. Details about how JNCC selected the most suitable pSPAs in UK offshore waters (Stage 2 of the UK SPA selection process) is provided in an accompanying document.

The Irish Sea Front is an area of the Irish Sea between Anglesey and the Isle of Man; it covers an area 180 km2. The area is a Special Protection Area for the Manx shearwater.

Within the site a tidal-mixing front occurs every spring and lasts through to late summer (Simpson and Hunter 1974). Fronts such as this are known to aggregate high numbers of marine organisms, making feeding profitable for species such as shearwaters (Vlietstra et al. 2005). This front contains the highest density of zooplankton within the western Irish Sea (Scrope-Howe and Jones 1985) and high numbers of herring are thought to aggregate in this area in response to the thermal and salinity gradients (Schneider 1990).

Bathymetry changes rapidly within the site and small 'trenches' in the seabed stretch from the south-west to the north-east. Water depths range between 45 m at the eastern limit of the site down to 80 m at the southern limit. The combined effect of currents and waves creates a moderate-energy seabed environment, comprised of either coarse sediments or sand and muddy sand (McBreen et al. 2011)

The site was identified as a hotspot of seabirds based on data from the European Seabirds At Sea database (ESAS). The analysis of ESAS data estimated a modelled population of over 12,000 Manx shearwaters within the Irish Sea Front SPA during the breeding season. Manx shearwaters have a foraging range of 330 km from their colonies (Thaxter et al. 2012); using this range, over 394,000 breeding pairs (from 18 colonies) could potentially travel to this SPA to forage. This highlights the potential significance of the SPA as a foraging area for the Manx shearwater breeding population across the Irish Sea region.

More details of these studies can be found in the Evidence section.

Site boundary description: The boundary of the Irish Sea Front SPA is based on the extent of the important aggregation of Manx shearwaters identified through analysis of available data. The boundary is drawn around gridded density data and is completely offshore with no landmass within its boundary. Further information about the methods used to identify the Irish Sea Front SPA is available on our SPAs webpages, or in the report on ESAS methods, which will provide more details on the data and methods used for this work.

Scrope-Howe, S. & Jones, D.A. 1985. Biological studies in the vicinity of a shallow-sea tidal mixing front. V. Composition, abundance and distribution of zooplankton in the western Irish Sea, April 1980 to November 1981. Philosophical Transactions of the Royal Society of London Series B, 310, 501–519.

The full overview of the data used to support site identification along with information on qualifying species is available in the Irish Sea Front SPA Departmental Brief.

Data for the identification of this SPA have been collected by boat surveys for the ESAS database. Data from these surveys provide direct evidence confirming the presence of the protected features within this area. Evidence from further boat surveys support the findings of the ESAS analysis and provide an independent analysis on more recent data that indicates the bird populations recorded for the Irish Sea Front SPA in the ESAS database are likely to be present in more recent years. Tracking studies indicate that breeding Manx shearwaters from at least three different colonies around the Irish Sea are likely to use the Irish Sea Front SPA to forage and highlight the potential significance of the area. Information from the seabird colony counts is used to supplement ESAS data to provide evidence of regular occurrence of species at colonies which are most likely to provide birds that forage in the Irish Sea Front SPA.

The Conservation Objectives set out what needs to be achieved for the site to make the appropriate contribution to the conservation status of the features for which the site is designated and thus deliver the aims of the Birds Directive.

This contribution would be achieved through delivering the following objectives for the sites qualifying feature:

Conservation Objectives are the starting point from which any management actions and monitoring programmes may be developed and should be considered when completing a Habitats Regulations Appraisal (HRA) for a proposed plan or project in or near this site.

In line with Regulation (18) of the Offshore Marine Conservation (Natural Habitats, & c.) Regulations 2007 (as amended), the advice on operations identifies those operations (human activities) that may cause damage or deterioration to the qualifying species, or their supporting habitats, for which the Irish Sea Front SPA has been classified. This information will be useful if you are developing, proposing or assessing an activity, plan or project that might affect the site.

The greatest direct threats to Manx shearwater from human activities are likely to be energy production and extraction of living resources (fishing) activities (based on best scientific evidence at the time of writing). However, all may be sensitive to some pressures exerted by the following types of activity;

These activities do not necessarily occur in or near the site at present however they are important to bear in mind to avoid potentially damaging activities from occurring within the SPA in the future.

Any activity that can cause a pressure or pressures to which the feature may be sensitive could present a risk to the feature of not achieving the conservation objective and we advise competent authorities should manage these in order to reduce or remove the overall risk to the proposed site’s qualifying features. Further information on activities than can present a risk to the achievement of the site’s conservation objectives is available in the advice package.

Our scientific understanding of the ecology of the site, its integrity and its qualifying features and how activities can affect them may change over time. JNCC’s conservation advice will be kept under review and will be periodically updated to reflect this.

Management actions seek to avoid any adverse effects on the listed features from those pressures associated with human activities.  All activities (on or off-site) should be managed in such a way as to minimise disturbance and mortality of the proposed bird features themselves or the habitat and food resource on which they rely, to avoid the risk of impacting the local population level to ensure the site’s conservation objectives are achieved (Tillin et al. 2010).

JNCC has developed a management options paper to support discussions with stakeholders about the management of activities within this SPA. This paper considers a range of activities and developments taking place within the SPA at the point of writing, and focuses on where we consider there could be a risk of the protected features not achieving their conservation objectives.

Tillin, H.M., Hull, S.C. & Tyler-Walters, H. 2010. Development of a Sensitivity Matrix (pressures-MCZ/MPA features). Report to the Department of Environment, Food and Rural Affairs from ABPMer, Southampton and the Marine Life Information Network (MarLIN) Plymouth: Marine Biological Association of the UK. Defra Contract No. MB0102 Task 3A, Report No. 22.a.