Liverpool Bay / Bae Lerpwl SPA is in the east of the Irish Sea, bordering the coastlines of north-west England and north Wales. The boundary of Liverpool Bay / Bae Lerpwl SPA extends beyond 12 nautical miles and therefore lies partly in Welsh and English territorial waters and partly in offshore waters; hence it is a site for which Natural England, Natural Resources Wales, and JNCC have responsibility to provide statutory advice.

Liverpool Bay / Bae Lerpwl SPA is in the east of the Irish Sea, bordering the coastlines of north-west England and north Wales, and running as a broad arc from Morecambe Bay to the east coast of Anglesey. It is classified for the protection of red-throated diver (Gavia stellata), common scoter (Melanitta nigra), and little gull (Hydrocoloeus minutus) in the non-breeding season; common tern (Sterna hirundo) and little tern (Sterna albifrons) in the breeding season, and an internationally important waterbird assemblage. 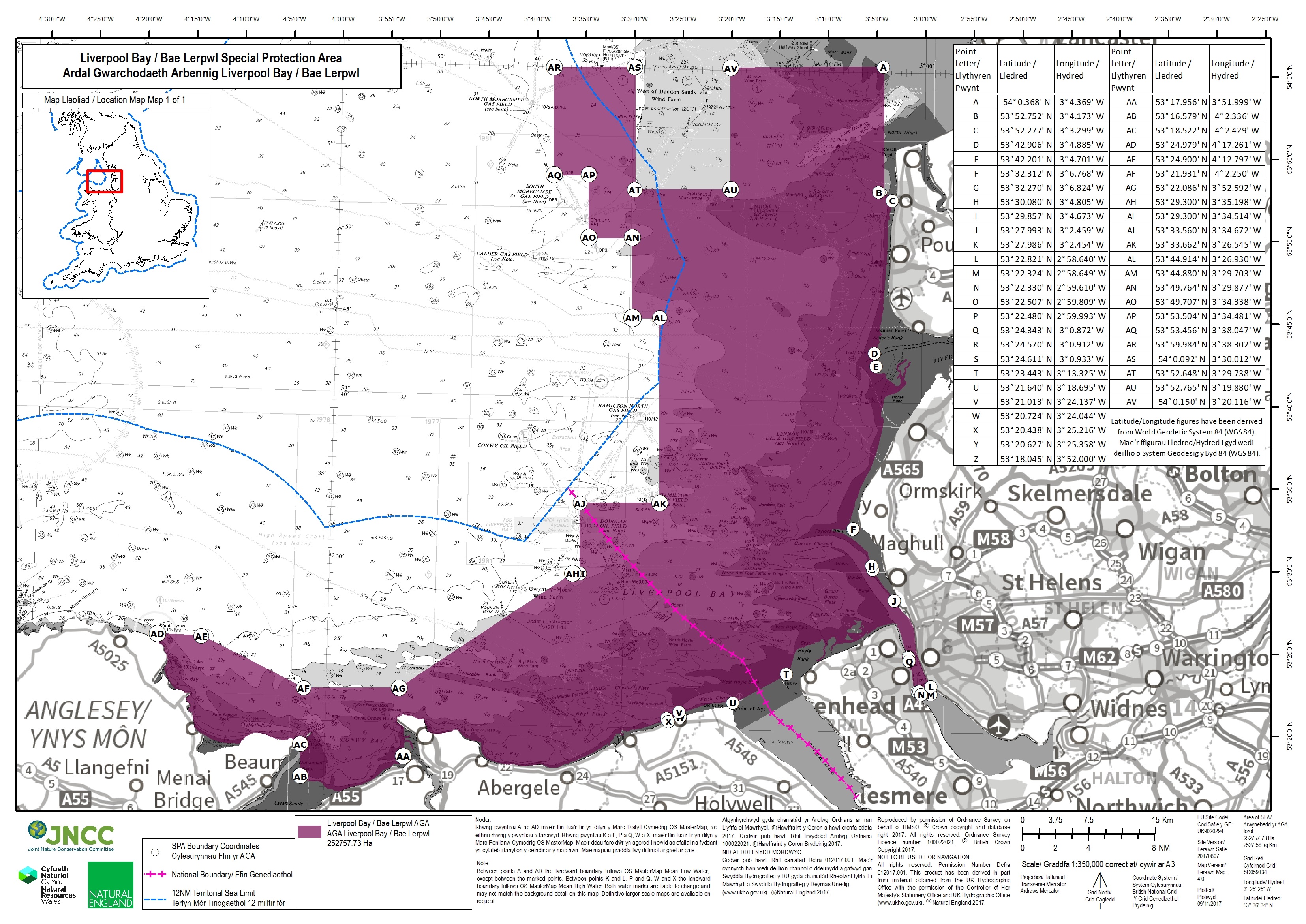 The boundary of Liverpool Bay / Bae Lerpwl SPA extends beyond 12 nautical miles and therefore lies partly in Welsh and English territorial waters and partly in offshore waters; hence it is a site for which Natural England, Natural Resources Wales, and JNCC have responsibility to provide statutory advice.

2 The main components of the assemblage include all of the non-breeding qualifying features listed above, as well as an additional two species present in numbers exceeding 1% of the GB total: red-breasted merganser (Mergus serrator) and great cormorant (Phalacrocorax carbo).

The overarching conservation objectives for the protected features of this site are to ensure they either remain in, or reach favourable condition. The ability of a designated feature to remain in, or reach favourable condition can be affected by its sensitivity to pressures associated with activities taking place within or in close proximity to a protected site.

The diagram below is a summary of the key milestones involved in the selection and classification of the Liverpool Bay / Bae Lerpwl SPA.

The documents referred to below and any other historical documents relating to Liverpool Bay / Bae Lerpwl SPA  were produced during the selection and classification process and therefore may be out of date. This Site Information Centre is the most up-to-date source of information for this SPA, and will reflect any additional information gathered since these documents were produced.

The current conservation objectives for the existing Liverpool Bay / Bae Lerpwl SPA are set out in the existing Regulation 35 advice for the site. These objectives continue to apply until, in due course, NRW, NE and JNCC formally issue revised 'Regulation 35/18 advice' for the extended/reclassified SPA.

Supplementary material has also been drafted for Liverpool Bay / Bae Lerpwl SPA, which outlines the most current thinking on the conservation advice and which should be read in conjunction with the Regulation 35 advice.

Information about the SPA site selection process is available on JNCC's SPA webpages.

The Liverpool Bay / Bae Lerpwl SPA is in the east of the Irish Sea, bordering northern England and north Wales, and running as a broad arc from Morecambe Bay to the east coast of Anglesey. It covers an area of c. 2,528 km2, classified for the protection of red-throated diver (Gavia stellata), common scoter (Melanitta nigra), and little gull (Hydrocoloeus minutus) during the non-breeding season, as well as a waterbird assemblage, and foraging areas for little tern (Sternula albifrons) and common tern (Sterna hirundo) breeding within coastal SPAs.

The seabed of Liverpool Bay / Bae Lerpwl SPA  contains a wide range of mobile sediments. Sand is the most common substrate, with a concentrated area of gravelly sand located off the Mersey Estuary. Tidal currents within the Bay are generally weak and do not exceed 2 m/sec. This in conjunction with an extended tidal range of 6–8 m facilitates deposition of sediments and encourages mud and sand belts to accumulate.

The population estimates and important usage areas for non-breeding red-throated diver, common scoter, little gull were identified from data collected using visual aerial survey over five winter seasons (2004/05, 2005/06, 2006/07, 2007/08 and 2010/11). The waterbird assemblage feature was also identified based on these data. Important foraging areas for little tern were identified from shore and boat-based surveys (2009, 2010, 2011) undertaken around the Dee Estuary SPA; while important usage areas for common tern around the Mersey Narrows and North Wirral Foreshore SPA were identified from models of common tern foraging behaviour generated from visual tracking surveys at selected colonies around the UK. The population of little tern expected to forage within the boundary is determined by the population size (a 5-year mean of Apparently Occupied Nests based on data from 2010–2014) at Gronant Beach.

Site location: the boundary of this SPA can be viewed or downloaded via JNCC's MPA mapper. Boundary co-ordinates for the site are available from the site boundary map.

The SPA lies mainly in English and Welsh territorial waters, but extends out to, and beyond 12 nautical miles at the north-west point of the existing boundary to Liverpool Bay / Bae Lerpwl SPA; hence it is a site for which Natural England, Natural Resource Wales and JNCC have a shared responsibility to provide statutory advice.

The landward boundary of the SPA generally follows mean low water mark or the boundaries of existing SPAs, whichever is the furthest seaward. The extension at Prestatyn and Mersey for foraging terns follows mean high water or the boundaries of existing SPAs. Therefore, the landward boundary of Liverpool Bay / Bae Lerpwl SPA will be adjacent to (but not adjoin) Morecambe Bay and Duddon Estuary SPA and directly meet the seaward boundaries of Ribble and Alt Estuaries SPA, Mersey Narrows and North Wirral Foreshore SPA, The Dee Estuary SPA and Traeth Lafan / Lavan Sands, Conway Bay SPA. There is a small overlap with the northernmost edge of Mersey Estuary SPA and the site entirely surrounds Ynys Seiriol / Puffin Island SPA. There is also an overlap with the Anglesey Terns / Morwenoliaid Ynys Môn SPA. Intertidal mudbanks and sandbanks separated from the mainland coast by subtidal areas at Mean Low Water are within the SPA boundary, except where they are within the boundaries of existing SPAs, as is the case in parts of the Mersey Narrows and North Wirral Foreshore SPA and The Dee Estuary SPA.

Information for this site summary was adapted from documents listed in the Relevant Documentation section.

The full overview of the data used to support site identification along with information on confidence in the protected features occurrence and abundance is available in theLiverpool Bay / Bae Lerpwl SPA Departmental Brief.

The conservation objectives for the protected features of the SPA are to ensure that subject to natural change, the integrity of the site is maintained or restored as appropriate, and ensure that the site contributes to achieving the aims of the Wild Birds Directive, by maintaining or restoring:

Our scientific understanding of the ecology of the site, its integrity, its qualifying features and how activities can affect them may change over time. The conservation advice produced by JNCC, NRW and NE will be kept under review and will be periodically updated to reflect this. Updated advice might include information on the surveillance required under Article 12 of the Birds Directive. Conservation advice for sites which straddle the 12 nm boundary will continue to be developed jointly with the relevant country nature conservation body. Further information is available on JNCC’s conservation advice webpage. Information can also be found on the Natural Resources Wales and Natural England websites.

The sub-sections that follow provide an account of the progress of Liverpool Bay / Bae Lerpwl SPA around each of the four stages in the MPA management cycle.

The conservation objectives and advice on activities capable of affecting the conservation status of the protected feature of this site are available in the Conservation Advice section.

This section details progress towards the implementation of management measures for activities considered capable of affecting the conservation status of the protected feature of the site.

A Site Improvement Plan was produced for the site prior to the amendments in 2017 and covers the inshore part of this site, advised on by Natural England and Natural Resources Wales. The plan provides a high-level overview of the issues (both current and predicted) affecting the condition of the sites protected features and outlines the priority measures required to improve their condition. An updated version of this plan will be provided when available to reflect the additional features and boundary amendments.

The protected features of the site are considered to be sensitive to pressures associated with fishing, 'licensable' activities and disturbance including shipping.

More detailed information will be provided here when it becomes available.

More detailed information will be provided here when it becomes available.

More detailed information on monitoring surveys in the site will be provided here when it becomes available.