The Seas off Foula SPA lies north of the Scottish mainland and about 15 km west of Shetland, covering the waters surrounding Foula. The site protects important feeding grounds for seabirds breeding on the island and beyond, including the largest marine aggregation of great skuas in the UK.

Lying about 15 km west of mainland Shetland, the Seas off Foula SPA covers the waters around and to the north-west of Foula. This island hosts more than 190,000 breeding seabirds, making it one of the largest seabird colonies in Britain. The marine SPA protects important feeding grounds for great skuas, fulmars, gulls and auks that breed on the island.

More than 5% of the British great skua population captures its food in this part of the north-east Atlantic. Small seabirds, such as auks and small gulls, feed mainly on energy-rich sandeels in the waters surrounding Foula. Larger species, such as large gulls and great skuas, supplement their diets with discarded fish and fisheries waste from fishing vessels in the area, or by stealing prey from other seabirds.

At the colony and the waters immediately surrounding it, the seabirds breeding on Foula are protected by the Foula SPA. The Seas off Foula SPA complements this colony SPA, ensuring that the marine foraging habitat is equally protected. 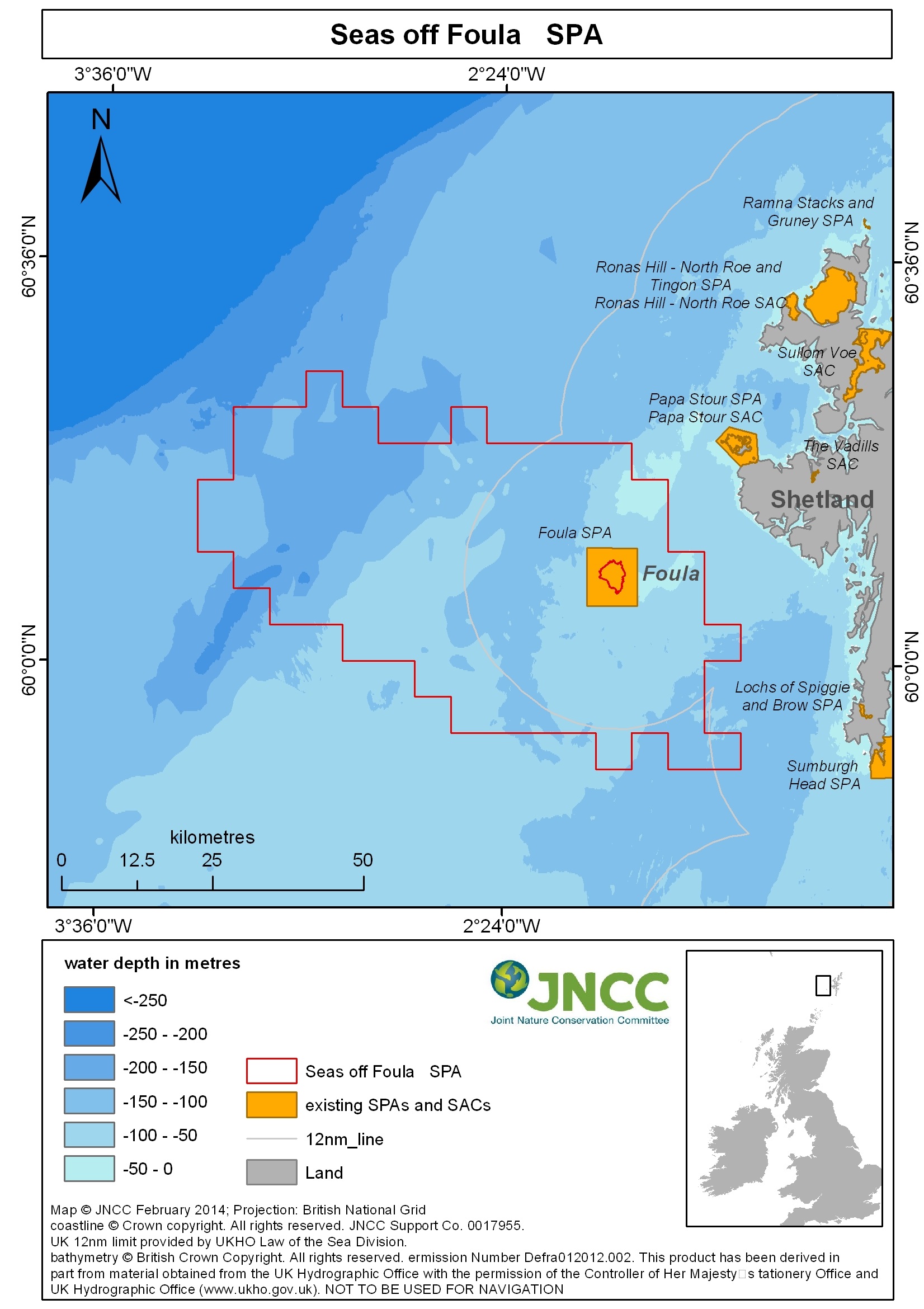 Legislation behind the designation: The Seas off Foula Special Protection Area was classified by the UK Government to meet obligations set out in the Birds Directive (2009/147/EC), and is protected by The Conservation of Offshore Marine Habitats and Species Regulations 2017 (as amended). Other regulations apply in inshore waters.

1 Biogeographic population size was added where species qualified based on this under Stage 1.2 of the Site Selection Guidelines.

2 To be a named component of a seabird assemblage a species needs to be present with at least 1% of it’s GB population, or with >2,000 individuals.

Note that the wording is in accordance with the conservation objectives, drafted to provide information during the public consultation. See also the Conservation Advice section.

The overarching conservation objectives for the protected features of this site are to ensure they either remain in or reach favourable condition. The ability of a designated feature to remain in or reach favourable condition can be affected by its sensitivity to pressures associated with activities taking place within or in close proximity to a protected site.

The diagram provides a summary of the key milestones involved in the selection and classification of the Seas off Foula SPA.

The documents referred to below and any other historical documents relating to the Seas off Foula SPA were produced during the selection and classification process and therefore may be out of date. This Site Information Centre is the most up-to-date source of information for this SPA and will reflect any additional information gathered since these documents were produced.

The Seas off Foula SPA (SPA) is located in Scottish marine waters, north of the Scottish mainland and Orkney, and about 15 km west of Shetland. It covers 3,412 km2 of inshore and offshore waters and surrounds the island of Foula and the Foula SPA.

Tracking of great skuas breeding on Foula shows that these individuals use the marine areas close by their breeding colonies for foraging, particularly to the west of Shetland, indicating that there is a strong link between great skuas breeding on Foula and the marine Seas off Foula SPA. Given the large foraging ranges of great skuas and northern fulmars, individuals from other breeding colonies on Orkney and Shetland could potentially use the SPA as a foraging site, too.

The waters around Shetland, including the Seas off Foula SPA, were once areas of high sandeel productivity. Since the 1980s, however, sandeel stocks have declined markedly and the reduced availability of this important prey species has had an impact on many of the seabirds breeding on Foula. Nevertheless, these remain important spawning and nursery grounds for sandeels, with the sandeel remaining an essential part of the diet of local seabirds. Sandeel spawning areas immediately south of the Seas off Foula were designated as the North-west Orkney Marine Protected Area in 2014. Newly hatched sandeel larvae are likely to migrate from the MPA to Shetland waters where they settle and provide prey for larger predatory fish and seabirds.

In the SPA, the combined effect of currents and waves creates moderate-energy seabed environments in the west, and high-energy seabed environments in the east of the site. The seabed is a mosaic of subtidal coarse sediments and moderate-energy circalittoral rock, with some sand and muddy sand habitats in the north-west. In addition, the Shetland-Orkney thermal front overlaps with Seas off Foula, which might create relatively predictable foraging areas for seabirds. Water depths range between 50 m and 150 m, with shallower areas adjacent to the island.

Seabird population estimates and important usage areas for seabirds in the Seas of Foula SPA are based on data from the European Seabirds at Sea database (ESAS) collected between 1980–2006. The analysis of ESAS data indicates that the SPA holds the largest marine aggregation of breeding great skua in UK waters; it is the only area where this species regularly occurs with more than 1% of it’s biogeographic population. Great skua therefore meet the Stage 1.2 SPA selection guidelines for migratory species. All other qualifying species occur with > 2,000 individuals or > 1% of their GB population in the site and qualify as parts of the breeding and/or non-breeding assemblages under Stage 1.3 of the guidelines.

Site location: the boundary of this SPA can be viewed via the map, which also includes the boundary co-ordinates.

Site depth range: In the Seas off Foula SPA. water depths range between 50 m and 150 m; shallow areas with less than 50 m depth occur only around Foula and 10 km north of it, while depths of more than 150 m are only reached in the north-west. The medium and shallow parts of the area are therefore within the depth range of 30–80 m favoured by sandeel.

Site boundary description: The seaward boundary has been set based on the extent of the great skua aggregation in the area. The landward boundary of the Seas off Foula SPA is adjacent to the existing Foula SPA. The SPA extends into offshore waters beyond 12 nautical miles; hence it is a site for which both NatureScot and JNCC have responsibility to provide statutory advice.

Information for this site summary was adapted from documents listed in the Relevant Documentation section.

Data were requested from the European Seabirds at Sea Partnership and analysed by the JNCC.  The full overview of how these data were used to support site identification along with information on confidence in the protected features occurrence and abundance is available in the SPA Site Selection Document.

Until the updated conservation objectives are available, the following preliminary Conservation Objectives have been drafted by JNCC:

This contribution would be achieved through delivering the following objectives for each of the site’s qualifying features:

Further supplementary advice on the draft conservation objectives is provided in the Draft Conservation Objectives and Advice on Operations document.

In line with Regulation (18) of the Offshore Marine Conservation (Natural Habitats, & c.) Regulations 2007 (as amended) and Regulation 33 of The Conservation (Natural Habitats &c.) Regulations 1994 (as amended in Scotland), the advice on operations identifies those operations (human activities) that may cause damage or deterioration to the qualifying species, or their supporting habitats, for which the Seas off Foula SPA has been classified. This information will be useful if you are developing, proposing or assessing an activity, plan or project that might affect the site.

The greatest direct threats to great skua, northern fulmar, Atlantic puffin and common guillemot from human activities are likely to be energy production and extraction of living resources (fishing) activities (based on best scientific evidence at the time of writing). However, all species might also be sensitive to pressures exerted by the following types of activity:

These activities do not necessarily occur in or near the site at present however they are important to bear in mind to avoid potentially damaging activities from occurring within the SPA in the future.

Any activity that can cause a pressure or pressures to which the feature may be sensitive could present a risk to the feature and affect whether conservation objectives are met; we advise competent authorities to manage these in order to reduce or remove the overall risk to the site’s qualifying features. Further advice on activities that can present a risk to the achievement of the site’s conservation objectives is available in the Advice to Support Management Document.

Our scientific understanding of the ecology of the site, its integrity and its qualifying features, and how activities can affect them may change over time. JNCC’s conservation advice will be kept under review and will be periodically updated to reflect this.

Management actions seek to avoid any adverse effects on the listed features from those pressures associated with human activities. All activities (on or off-site) should be managed to minimise disturbance and mortality of the bird features or the habitat and food resource on which they rely. The risk of impacting the local population level needs to be avoided to ensure the site’s conservation objectives are achieved.

JNCC and Scottish Natural Heritage (now NatureScot) have developed an Advice to Support Management Document to support discussions with stakeholders about the management of activities within this SPA. This paper considers a range of activities and developments taking place within the SPA and focuses on where we consider there could be a risk of conservation objectives not being met.

This site forms part of the networks of MPAs across the UK and contributes to international networks such as that of the North-east Atlantic under OSPAR. As the UK is a contracting party to the OSPAR Commission, JNCC is committed to ensuring that the OSPAR MPA network is well-managed.

Further information on the progress of the Seas off St Kilda SPA around each of the four stages in the MPA management cycle will be provided when available.

More detailed information on monitoring surveys in the site will be presented here when available.

Under Article 12 of the EU Wild Birds Directive (2009/147/EC), Member States are required to report every six years on their progress on the implementation of the Directive. Following the UK's exit from the European Union, this section will be updated to reflect the new assessment schemes once they are in place.