Map displaying the Skomer, Skokholm and the Seas off Pembrokeshire MPA boundary and associated protected feature data. Visit JNCC's MPA Mapper to further view and explore data for this MPA. 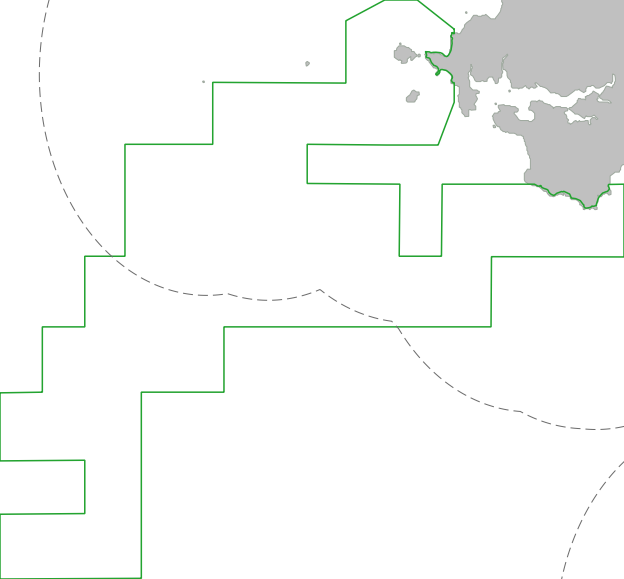 The islands of Skomer and Skokholm support the largest concentration of breeding seabirds in England and Wales. They hold the largest breeding colony of Manx shearwater in the world (considered to be 316,000 pairs), one of the largest colonies of lesser black-backed gull in Britain (currently over 10,000 apparently occupied sites), as well as being important Welsh breeding sites for other seabird populations, such as razorbill, black-legged kittiwake, Atlantic puffin and common guillemot, supporting a breeding seabird assemblage of over 394,000 birds.

Skomer, Skokholm and the Seas off Pembrokeshire SPA is located off the extreme south-west tip of Pembrokeshire in south-west Wales. This SPA extends beyond the 12 nautical mile boundary, lying partly in Welsh territorial waters and partly in UK offshore waters; therefore both Natural Resources Wales and JNCC have a responsibility to provide statutory advice.

The islands of Skomer, Skokholm and Middleholm are designated as Sites of Special Scientific Interest (SSSI), with Skomer Island also designated as a National Nature Reserve (NNR). The waters immediately around Skomer, are designated as a Marine Conservation Zone (MCZ) and the SPA also overlaps with the Pembrokeshire Marine / Sir Benfro Forol Special Area of Conservation (SAC). The islands of Skomer and Skokholm are one of five UK core seabird monitoring sites under the national Seabird Monitoring Programme (SMP), providing demographic data on numbers, productivity and survival rates.

Summary of qualifying ornithological features in Skomer, Skokholm and the Seas off Pembrokeshire SPA.

The overarching conservation objective for the protected features of this site is to ensure that their condition is maintained or enhanced. The ability of a qualifying feature to maintain or enhance its condition can be affected by its sensitivity to pressures associated with activities taking place within or near to a protected site.

The diagram below is a summary of the key milestones involved in the selection and classification of the Skomer, Skokholm and the Seas off Pembrokeshire SPA.

The documents referred to below and any other historical documents relating to Skomer, Skokholm and the Seas off Pembrokeshire SPA were produced during the selection and classification process and therefore may be out of date. This Site Information Centre is the most up to date source of information for this SPA, and will reflect any additional information gathered since these documents were produced

Skomer, Skokholm and the Seas off Pembrokeshire SPA is located off the extreme south-west tip of Pembrokeshire in Welsh territorial and UK offshore waters. It includes the islands of Skomer and Skokholm which hold the largest concentration of breeding seabirds in England and Wales. Especially notable is the population of Manx shearwater Puffinus puffinus which represents the largest breeding colony in the world.

The marine area of the SPA is physically and hydrographically diverse, with high levels of primary productivity. The associated growth and concentration of zooplankton and fish offers rich feeding resources for seabirds and mammals.

Site location: the boundary of this SPA can be viewed or downloaded on JNCC's MPA mapper.

Site depth range: Water depth within the site ranges from mean low water to 50–100 m deep along the seaward boundary of the site.

Skokholm and Smoker SPA was originally classified on 31 August 1982, with an area of 427.7 hectares. Following a public consultation in early 2014, on 7 October 2014, Skokholm and Skomer SPA was reclassified and the boundary extended by a 4 km radius around the islands, adding a marine area of 14,348 ha. The extended boundary included waters vital for essential ecological requirements (preening, bathing, displaying, loafing/resting at sea) for Manx shearwater and Atlantic puffin (as individually qualifying features) as well as common guillemot and razorbill (as component species of the seabird assemblage).

On 30 January 2017, the seaward boundary of the site was extended by 1,524 km2, encompassing two additional marine areas to the south-west of Pembrokeshire, which were identified as hotspots for foraging Manx shearwater, and one area immediately west of Skomer Island, identified as a hotspot for foraging Atlantic puffin.

Information for this site summary was adapted from documents listed in the Relevant Documentation section. More information on the methods used to identify the Skomer, Skokholm and the Seas off Pembrokeshire SPA, can be found in the Evidence section.

An overview of the data used to support the site identification along with information on qualifying species is available in the Skomer, Skokholm and the Seas off Pembrokeshire SPA Departmental Brief.

Data supporting the classification of this SPA includes breeding seabird colony counts, and boat survey data collated by the European Seabirds at Sea (ESAS) database. Additionally, sea areas around the breeding colonies, important for rafting and maintenance activities, were identified by radio-telemetry surveys. Data from these surveys provide direct evidence confirming the presence of the protected features within the site.

Details of seabird monitoring reports can be found in the Monitoring section.

If you are aware of any additional data or relevant scientific papers for this site not listed above or in the Relevant Documentation section, please contact us.

The protected features covered by the draft conservation advice are the qualifying marine species of the SPA: breeding populations of storm petrel, lesser black-backed gull, Manx shearwater, and Atlantic puffin, as well as the breeding seabird assemblage. For each of these features there are four conservation objectives:

The feature-specific targets for each of these objectives are provided in the draft conservation objectives document.

Conservation objectives for the qualifying terrestrial species (red-billed chough and short-eared owl) are provided in the core management plan.

Our scientific understanding of the ecology of the site, its integrity, qualifying features and how activities can affect them may change over time. JNCC's and NRW's conservation advice will be kept under review and will be periodically updated to reflect this and the surveillance required under Article 12 of the Birds Directive. Conservation advice for sites which straddle the 12 nm boundary will continue to be developed jointly with the relevant country nature conservation body. Further information on JNCC’s conservation advice work is available on its 'Conserving MPAs' webpage. Information can also be found on the Natural Resource Wales website.

The sub-sections that follow provide an account of the progress of Skomer, Skokholm and the Seas off Pembrokeshire SPA around each of the four stages in the MPA management cycle:

The draft conservation objectives of the protected features of this site are available in the Conservation Advice section.

This section details progress towards the implementation of management measures for activities considered capable of affecting the conservation status of the protected feature of the site.

Natural Resources Wales has produced a management plan for the former Skokholm and Skomer SPA. The objectives and measures set out in this plan continue to apply to the re-classified Skomer, Skokholm and the Seas off Pembrokeshire SPA. The plan provides a high-level overview of the objectives for the site, performance indicators, the results of monitoring, and advice on the actions required.

The Natura 2000 Standard Data Form lists pressures and threats to which the protected features of the site are considered sensitive. In the marine area, these include the following activities:

Information on site condition monitoring is available in the management plan produced for the former Skokholm and Skomer site by Natural Resources Wales.

Further information will be provided in the Assessment section as it becomes available.

JNCC is currently leading on the development of options for biodiversity monitoring across all UK waters. JNCC’s advice for the monitoring of marine birds, which will include SPA monitoring, is anticipated to contain:

Information on monitoring of this SPA will be provided when it becomes available.