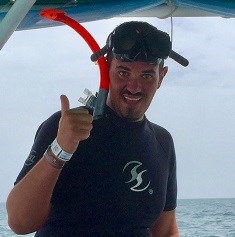 When did you start at JNCC? I started work at JNCC in October 2009.

What is your role in JNCC? I am currently one of the Marine Ecosystems Team Leaders working alongside two others. The work portfolio of our team is particularly diverse and broad, but is all centred largely around undertaking marine ecosystem health assessments and reporting on the results at a range of spatial scales; from individual marine protected areas right up to entire marine regions. My particular role is to lead our teams’ work on marine protected areas both nationally and internationally and to support wider marine ecosystem health assessment work.

What do you like the most about working at JNCC? There are lots of positives to working within JNCC. One of the main perks is the challenge of working out how to deliver effective ‘on the ground’ conservation outcomes that are underpinned by ambitious policies set out by UK governments. The opportunity to engage and work with people from many different walks of life is also very rewarding and the opportunity to work on lots of different aspects of marine conservation and pick up additional knowledge and skills along the way has been really great.

What’s been your greatest achievement at JNCC? Definitely the day that the formal announcement around the designation of nature conservation marine protected areas in Scotland’s seas came out. Such a huge amount of work went into that project and to see the sites I had worked on legally designated and out there for all to see gave me a sense of great achievement.