The Greater Wash SPA lies along the east coast of England in the mid - southern North Sea and extends between the counties of Yorkshire (to the north) and Suffolk (to the south). The boundary of the Greater Wash SPA extends beyond 12 nautical miles; hence it is a site for which both Natural England and JNCC have responsibility to provide statutory advice.

This site protects important foraging areas for the largest breeding populations of little tern in the UK marine SPA network (798 pairs), and important areas used by the second largest non-breeding populations of red-throated diver (1,407 individuals) and little gull (1,255 individuals) within the UK SPA network. The boundary of the Greater Wash SPA extends beyond 12 nautical miles; hence it is a site for which both Natural England and JNCC have responsibility to provide statutory advice. The SPA lies along the east coast of England in the mid-southern North Sea and extends between the counties of Yorkshire (to the north) and Suffolk (to the south). 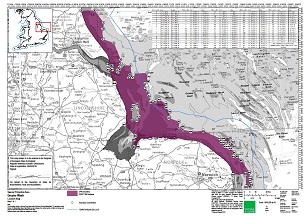 The overarching conservation objectives for the protected features of this site are to ensure they either remain in, or reach favourable condition. The ability of a designated feature to remain in, or reach favourable condition can be affected by its sensitivity to pressures associated with activities taking place within or in close proximity to a protected site.

The diagram below is a summary of the key milestones involved in the selection and classification of the Greater Wash SPA.

The documents referred to below and any other historical documents relating to the Greater Wash SPA  were produced during the selection and classification process and therefore may be out of date. This Site Information Centre is the most up-to-date source of information for this SPA, and will reflect any additional information gathered since these documents were produced.

Information about the SPA site selection process is available on JNCC's SPA webpages.

The Greater Wash SPA lies along the east coast of England, predominantly in the coastal waters of the mid–southern North Sea between the counties of Yorkshire to the north and Suffolk to the south. It covers an area of c. 3,536 km2, classified for the protection of red-throated diver (Gavia stellata), common scoter (Melanitta nigra), and little gull (Hydrocoloeus minutus) during the non-breeding season, and for breeding Sandwich tern (Sterna sandvicensis), common tern (Sterna hirundo) and little tern (Sternula albifrons). This area supports the largest breeding populations of little terns within the UK SPA network by protecting important foraging areas, and supports the second largest aggregations of non-breeding red-throated diver and little gull.

The area of the SPA includes a range of marine habitats, including intertidal mudflats and sandflats, subtidal sandbanks and biogenic reef, including Sabellaria reefs and mussel beds. Much of the area is less than 30 m water depth, with a deep channel of 90 m depth at the Wash approaches. Several sites that have been notified or designated under British or European conservation legislation overlap or adjoin the Greater Wash SPA boundary; these include Inner Dowsing, Race Bank and North Ridge SAC, The Wash and North Norfolk Coast SAC, and Haisborough, Hammond and Winterton SAC. The boundaries of two Marine Conservation Zones (MCZs) – Holderness Inshore MCZ and Yorkshire Coast and Cromer Shoal Chalk Beds MCZ – are encompassed within the SPA boundary.

The population estimates and important usage areas, for non-breeding red-throated diver, common scoter and little gull in the Greater Wash SPA were based on data collected from visual aerial surveys over five winter seasons (2002/03, 2004/05, 2005/06, 2006/07 and 2007/08). These data demonstrate that the Greater Wash SPA regularly supports numbers of red-throated diver that are well in excess of the percentage population threshold (>1% of the GB population of this species) identified under the UK SPA selection guidelines (Stroud et al. 2001). There is no GB population estimate against which to assess the numbers of little gull using the site, however comparison with non-breeding numbers in other areas around the UK indicates this is an important site for little gull in the non-breeding season and thus little gull was added as a feature of the site under stage 1.4 of the SPA selection guidelines. Likewise, considerations under stage 1.4 of the SPA selection guidelines supported common scoter as a feature of this site.

SPA population estimates for the tern species were based on counts within the existing colony SPAs, taken from the national Seabird Monitoring Programme (SMP), along with additional information from colony managers and the EU LIFE+ little tern project.

To identify the most important foraging areas for the larger tern species, (sandwich tern and common tern), boat-based visual tracking surveys were undertaken between 2009 and 2011. These surveys tracked the foraging trips made by birds from each colony of interest, during the chick rearing period. The resultant information on foraging locations chosen by the birds was combined with information on the habitat characteristics of those locations relative to other areas available, to construct habitat association models of tern usage. Around colonies for which no (or insufficient) data were available, analysis of (species-specific) data pooled across colonies, produced generic models which allowed predicted foraging usage to be determined.

To identify the most important foraging areas for little tern two survey methods were employed, shore-based observations and boat-based transects, undertaken between 2009 and 2013. These were used to determine the alongshore and seaward extents of important foraging areas. Where colony-specific data were not available, generic distances (derived from the results at other colonies) were applied.

Site location: the boundary of this SPA can be viewed via the map, which also includes the boundary co-ordinates.

Site boundary description: The Greater Wash SPA boundary was produced as a composite boundary enclosing the extents of the important areas identified for each of the qualifying species. The seaward extent of the boundary is defined by the distribution of red-throated diver, and by the foraging area of Sandwich tern off the north Norfolk Coast. The landward boundary follows Mean High Water. The boundary of this SPA extends into offshore waters beyond 12 nautical miles; hence it is a site for which both Natural England and JNCC have responsibility to provide statutory advice.

Information for this site summary was adapted from documents listed in the Relevant documentation section.

The full overview of the data used to support site identification along with information on confidence in the protected features occurrence and abundance is available in the pSPA Departmental Brief.

Data for this SPA were collected by the Nature Conservancy Council (NCC) in 1989 and 1991 and the Wildfowl & Wetlands Trust (WWT) from 2003 to 2007. NCC surveys were carried out as part of Phase 3 of the NCC Seabirds at Sea project, while WWT surveys were commissioned in response to proposals to develop wind farms in the Greater Wash and in other areas around the UK. The surveys were commissioned by a consortium of private companies, as well as DBERR (Department for Business Enterprise and Regulatory Reform, formerly Department of Trade and Industry (DTI), the Department for the Environment, Food and Rural Affairs (DEFRA) and the COWRIE. Data from these surveys provide direct evidence for the numbers of red-throated diver, common scoter and little gull within the site.

Data on the numbers and distribution of tern species during the chick rearing period were collected by the Joint Nature Conservation Committee (JNCC), Seabird Monitoring Programme (SMP), colony managers and the EU LIFE+ little tern project between 2009 to 2014.

Until the full Conservation Advice packages is produced, Conservation Objectives have been made available by Natural England for the Greater Wash SPA.

Further information on the progress of the Greater Wash SPA around each of the four stages in the MPA management cycle will be provided in due course.

More detailed information on monitoring surveys in the site will be presented here when it becomes available.